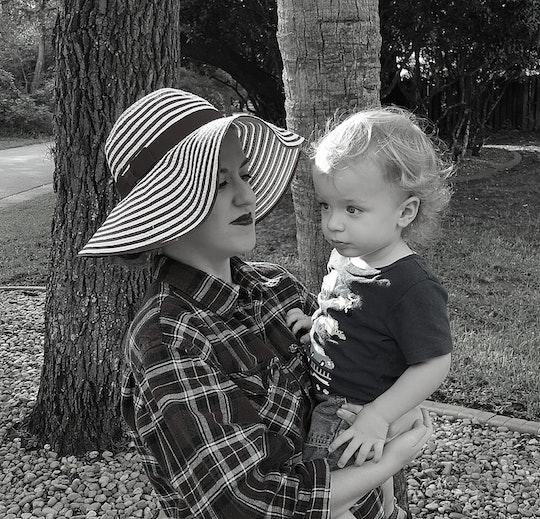 I Recreated 5 Of Gwen Stefani's Best Looks, & Here's What Happened

Fashion, much like any art form, can be cyclical. Some things, like the little black dress, will never go out of style, whereas other trends (I’m looking at you, frosted tips) should probably stay in the past. By now everyone knows that the ‘90s have made a huge comeback in 2015. From hairstyles and makeup to music and television, nostalgia is definitely having its moment — and I couldn’t be happier! I fondly remember getting my first taste of fierce feminism when I listened to No Doubt’s Just A Girl and being blown away. Even though I was only 9 years old, I knew that Gwen Stefani was my girl power role model.

Not too surprisingly, nearly two decades later, I still find myself looking up to the queen of ska punk. Whether she’s effortlessly toting around her three children, pairing up with Urban Decay to create an eyeshadow pallette, or performing on The Voice, she is a feminist force to be reckoned with. In honor of the 20 anniversary of No Doubt’s Tragic Kingdom, and because I don’t ever need an excuse to play dress-up as a grown-up, I decided to try and recreate some of Ms. Stefani’s fashion choices proving you can be both stylish and a mom.

Picking five of Gwen Stefani’s top looks — embracing both the nurturing side of motherhood and the fierce individuality of a born rebel — I’d do my best to attempt to recreate them. Sure, famous celebs probably have stylists and makeup artists and assistants, but something about her style has always seemed relatable and echoed her punk roots. I love that no matter what, Gwen's style has always felt entirely her own. I thought it would be fun to see what I could come up with using her style as inspiration.

Most importantly, I wanted to prove to myself that I could still rock steady with the best of them.

Fresh out of the studio and always the busy business woman, Gwen Stefani still keeps up with her regular gig on The Voice.

Normally I wear your standard business attire to my day job where I work with children who have learning challenges. Maybe it’s because I’m around children more than I’m around adults that it can be easy to forget you’re allowed to look nice at work. My somewhat fancy hair and more polished look was actually a fun talking point at work. One student was particularly enamored with my pouf. She just couldn’t figure out how I did it. Even though I explained it to her, she insisted that I used a bicycle tire pump in my hair. Funny comments aside, it felt really empowering to put more time into my outfit that day.

Enjoying the outdoors in Montana with her child, she rocks the nurturing-mother vibe here.

Even though the climate isn’t always as sunny and beautiful as you might think here in Florida, my son and I still love to venture outdoors whenever the weather allows. Just the simple addition of lipstick and a hat had me feeling more put together than I usually do when we’re outside. Perhaps it was because it was still 90 degrees, but I ended up being too distracted by the heat and humidity to really enjoy my fashionable choices that day.

Taking it back to the sporty style of her No Doubt days, she had a simple yet athletic look when she performed on Ellen recently.

Though her appearance on Ellen wasn’t exactly a typical girl’s night out, she did seem to be enjoying herself on a weekday — something I rarely thought possible when you’re a working woman with kids. But I decided I would add a little fun into my weekday routine. I love her sporty looks the most because it reminds me of when I first saw her performing on MTV. She was the first female I’d ever seen that wasn’t super curvy or buxom, yet she still had all the confidence in the world. I’m still just as small-chested now as I was then (maybe a little bigger, because, you know: having a kid), so I always feel super comfortable in this style.

Truthfully, the focus is less on what she’s wearing here and more on how she’s showing the real and sometimes messy side of being a mom.

Let’s be honest: my son, just like many other kids, can be fidgety, funny, and a little bit gross at times. So it wasn’t to difficult to snap a picture of him being silly with mommy. Just like in Stefani’s picture, I realized this had little to do with how I looked or was dressed. It was actually insanely freeing to snap pictures with my son and not worry about having to take a million to get a “good” one where he’s sitting still or isn’t doing something weird. We could just be goofy and that in and of itself felt great.

Posing with her niece, Stella, for her clothing line Chasing Fireflies, the two gals are having fun at the photo shoot.

My son can be a tad picky about what he wears, but boy does he love hats! Ever since he was little, he found it utterly fascinating that you could put something on your head and walk around with it on. Don’t you envy how excited kids are with life sometimes?

Since I don’t have a niece of my own to take pictures (hint, hint), I decided to embrace the sense of whimsy Gwen captured in her Instagram post. Sitting back and watching my son put on different hats and clothes without any kind of rules or restrictions was definitely the highlight of this experiment. I love getting to see my tiny human growing up before my eyes, discovering likes and dislikes, and developing a style all his own.

Oh, and I got to wear lipstick again, so, win.

Gwen Stefani will always be a style and feminist icon to me, but this little experiment made me realize you don’t have to be celebrity to enjoy being a fashionable woman, let alone a fashionable mom.

Sure, I definitely own way more Tee Fury shirts than a person my age probably should and combat boots are still my go-to choice for footwear, but there’s nothing wrong with that. There’s also nothing wrong with liking to wear bright lipstick and rocking a cute outfit either. That’s what I love about feminism and fashion: you can color outside the lines.