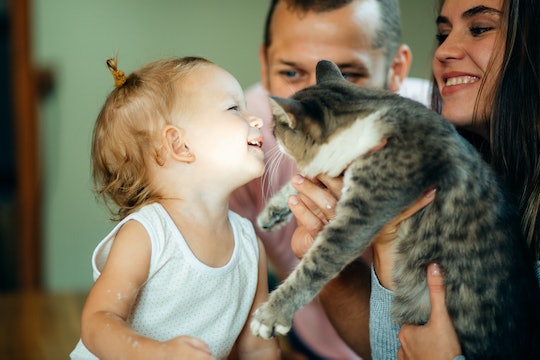 In the grand tradition of lying to our children, is the whopper we tell them when a beloved pet has died. Even before I became a mom, I never understood why parents would tell a child that their dog or cat went to live on a farm, ran away, or took a trip, instead of just telling them the truth. My views haven't changed, either, and now that I've gone through the loss of a pet with my daughter, I'm even more convinced that honesty is the best policy. I refuse to lie to my kid about a pet's death, and here's why.

Pets have been a central part of my 2.5-year-old daughter's short life. When she was born, we had two cats and a dog in our home. One of our cats passed away when baby girl was only 3-months-old, but the remaining cat and dog have been wonderful "fur siblings" to her. My cat Hank was always especially patient, lying with her as she played on the floor, gently tolerating chasing and tail-pulling, and even comforting her when she cried. He got really sick around her second birthday, but he pulled through. And when he turned 15 last fall, I knew I needed to start preparing myself and my family for the inevitable.

A few weeks ago, Hank stopped eating. After several vet visits and medications, he let me know it was time. He wasn't moving around and couldn't make it to the litter box. I consulted with my best friend at home, who is also a veterinarian, and she agreed that euthanasia was probably the best option. The next morning before school, I brought my daughter to her kitty and told her she needed to say goodbye. She kissed him on his haunches, and he meowed. "It's OK, buddy," she consoled him. As the tears rolled down my cheeks, my sweet little girl said, "Mommy, you crying."

I arranged for my mom BFF to pick my daughter up after school and took my cat to the clinic to be put down. Although telling my daughter the truth about him dying was important to me, I didn't think she needed to be there for the procedure (I don't think it's disingenuous to save some topics, like euthanasia, for when she's older). I brought my daughter home in the evening, and she immediately went to complete her favorite chore. After feeding the dog, she ran into the laundry room, announcing, "Hank's turn." I sat her down and told her, "Hank is gone. He died, baby." She responded, "Hank go bye-bye? Hank go work?"

Explaining death to a toddler is not easy. Developmentally, it's almost impossible for them to understand (hell, I even have a hard time with the concept), but I don't think that means we shouldn't try. Our children are more capable than we want to believe. Our kids can take a relatively complicated, multi-layered concept like death, and whittle it down in an age-appropriate way that allows them to wrap their minds around loss. So leave it to a little kid to explain that when a pet is gone, we have to "hug them in our hearts."

I do think, however, that talking about a pet's death is an especial challenge for someone like me, who doesn't believe in heaven. It's funny, though, because although I'm an atheist, I have no trouble believing in the Rainbow Bridge. It makes sense to me that when we die, we become part of the ether or whatever. Granted, that's a little much for an almost 3-year-old, but I think she may be able to grasp that when we die, our spirits (what makes us us) leave our bodies, and that mommy believes we are reunited with those we have loved, furry and otherwise.

Not only is it possible to address death with young children, it's what's best.

Parents don't have to face the prospect explaining death on their own. We're lucky to have quality children's books and programming to help us. For older children, Annie and the Old One provides a beautiful explanation of the circle of life. My daughter is a little young for that, but she's the perfect age for the Daniel Tiger episode "Daniel's Fish Dies." The movie Moana has been helpful to my friend's 4-year-old, although she's now convinced she's coming back as a stingray in her next life (hey, who's to say she's not?). I still remember the Sesame Street episode that deals with Mr. Hooper's death. When the actor who plays the storekeeper passed away, the writers used it as an opportunity to address the difficult topic of death. It was a loving lesson from childhood that has stuck with me as an adult.

Not only is it possible to address death with young children, it's what's best. Lying is problematic for a number of reasons. First, it takes a lot of energy. Lies beget more lies. (If Max went to live on the farm, why can't we visit him?) You're human, and eventually, you're going to slip up. That, or your kid will figure it out on their own. Children have a sixth sense for when something is wrong, even when the adults are saying everything is OK. When I was 8 and my mom almost died after a miscarriage and botched D&C, I fell into a deep depression, even though there wasn't a single adult willing to tell me what was really going on.

Telling my daughter the truth about the death of our cat has also allowed me to grieve as I need.

If you get caught in a lie, you've undermined yourself as a parent. Not only will they likely be angry that you lied, they'll be less likely to trust you in the future. It also sends them the message that lying is acceptable when you deem it convenient. When my sister was my daughter's age, she watched Bambi for the first time and realized that if Bambi's mommy could die, so could hers. She asked my mom to promise her she wouldn't die. Of course, as much as you might like to, no one can promise that. My mom assured her that she would do everything in her power to keep that from happening, but that she couldn't make that promise. It was hard for my sister to accept, but imagine if my mom had lied and something had happened to her.

Telling my daughter the truth about the death of our cat has also allowed me to grieve as I need. Maybe that's selfish, but I think it's good for children to see adults mourn. When she sees me cry and I can tell her why, she learns that it's OK to feel sad when we lose someone we love. It also gives her practice at expressing empathy. My little girl has been able to articulate that "mommy sad Hank." The morning we said goodbye, she stroked my back and pulled me in for an extended hug as I buckled her into her car seat. Seeing me grieve also gives her permission to do so in her own way. She's never going to be shushed for talking about it. She can reiterate "Hank gone" as much as she needs to. She even told me that Hank wanted her kisses.

It is a natural part of life, and it's something that goes hand-in-hand with pet ownership.

All this is good for her, as is the lesson she is learning about life. My mom always told us that everything that lives eventually dies — plants, animals, and people. It is a natural part of life, and it's something that goes hand-in-hand with pet ownership. Whether due to old age, illness, or accident, most of us can expect to outlive our pets. The lessons my child is learning around the death of her dear kitty will help her cope with losses in the future. I'm just grateful that she is learning them now with a pet before she has to deal with the loss of someone like a grandparent.

As a mother, I can absolutely understand a parent's desire to protect their precious child from pain and sorrow, but I don't agree with it. I think that children who grow up without experiencing loss (whether because they were sheltered from it or by sheer luck), either end up with an irrational fear of death or an unhealthy expectation that life is always happy. I'd much rather my child know sadness so that she can truly appreciate joy. Another golden nugget from her grandma: the grief you feel is simply a measure of your capacity to love.

For every little pang I feel at her mention of our kitty, I am grateful for what my child is learning. There is so much I want for her in life: love, resilience, a sense of wonder. Most of all, however, I wish for her the full range of human experience, and that includes saying goodbye to a beloved pet.