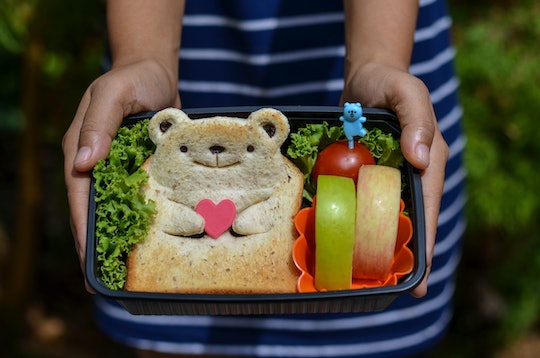 I Refuse To Pack My Kid's Lunch & No, I'm Not Sorry

The days of packing my kids' lunches for school ended not with a bang, but with a bag — a bag of moldy carrots, that is. I discovered the abomination at the bottom of my daughter's My Little Pony lunch box and quickly came to the conclusion that something needed to change. So, yes, now I refuse to pack my kids’ lunches... and I'm not even a little bit sorry.

My kids still eat lunch at school, of course! Just, you know, not ones that I pack, and not ones that they can buy. I actually gave my kids the responsibility of packing their own lunches as a part of their nightly routine. I haven't seen (or touched) a single moldy carrot since.

It took me a while to get to this happy, moldy carrot-free place, though. I used to be the kind of mom who curated Pinterest-worthy lunches for my kids in Bento-style boxes, complete with things like dinosaur-shaped sandwiches, fresh fruits and veggies, and hummus dip. I even made homemade pop tarts and bunny rolls to try to please their pint-sized palates and entice them to eat. And none of it — absolutely not of it — worked. My kids were bringing home uneaten lunches and I was throwing them away. So I realized that I was spending way too much time preparing beautiful meals they weren't going to eat, much less appreciate.

Part of the problem, of course, is that my daughter is quite possibly the pickiest eater on the planet. Her food issues stem from a combination of anxiety, obsessive compulsive disorder (OCD), and food allergies. In other words, her picky eating isn't entirely her fault. But as the person responsible for feeding her, it was unbelievably frustrating to try to figure out just exactly what she would eat on a given day, and even worse, to have that list of acceptable foods change the next time I packed her lunch.

As someone who was forced to sit at the table until I cleaned my plate, and later suffered from eating disorders and hangups about food as a result, I wanted to do things differently.

To be fair, my neuro-typical kindergartner can be pretty picky, too, and especially when it comes to what he eats at school. There were days when my son would bring home a lunch bag full of everything I packed the night before, save for a granola bar or fruit roll up. He claimed he didn't have enough time to eat, but when I tried eliminating the snack foods from his lunch my son wouldn't eat anything. That's right. Nothing. My son would have nothing for lunch, even though I packed a whole lot of beautifully prepared somethings in his lunchbox.

Things weren't this hard at breakfast or dinner time, either. At home I used the division of labor created by the Ellyn Satter Institute, which theorizes that when kids have more control over what they eat, they learn to make better choices, to enjoy meals, and to stop having so many issues about food. As someone who was forced to sit at the table until I cleaned my plate, and later suffered from eating disorders and hangups about food as a result, I wanted to do things differently. So I am responsible for determining when, where, and what I serve, and my children get to decide what and how much they eat. This simple approach virtually eliminated meal-time struggles.

I want her to learn to take responsibility for her own diet, within reason, by offering her healthy choices and letting her choose what she wants to eat.

Why it took me so long to apply this method to my kids' school lunches I will never know. I think I Just got so wrapped up in trying to create and send beautiful, Insta-worthy lunches, that I forgot about the most important part: my kids eating. So I let myself get overworked and overly-tired. Tired of making lunches. Tired of throwing them away at night. Tired of asking my kids why they wouldn’t eat the food I packed. Tired of feeling like I was constantly failing my children. Tired of feeling like a bad mom.

So, I divided our responsibility for lunches. I buy the food and set it on the counter every night after dinner, making sure to include things I know they like, or the component parts of things they know how to make, like sandwiches, veggies, fruit, applesauce, and yogurt. I also set out snack, and desserts, because I want them to learn that there are no "bad" foods. And my kids have the responsibility of picking what they like, packing it in their lunch bags, and bringing those bags back home at the end of the day.

Since I started refusing to pack their lunches, I no longer feel like failure... at least about lunches, anyway.

And when I started letting my kids pack their own lunches, they started actually eating them.

My son is in Kindergarten, so there's been a bit more of a learning curve, but he's starting to make better choices. But I am happy to report that my daughter now comes home with an empty lunch box every day. I have no idea if she eats everything or if that lunchbox is empty because she throws a few items away, but I'm honestly not going to worry about it, either. I want her to learn to take responsibility for her own diet, within reason, by offering her healthy choices and letting her choose what she wants to eat. And since I know she's eating healthy foods at home for her other meals, so as long as she eats something when she's at school I'm happy.

As for me? Well, I've been awesome. I've made peace with the fact that I cannot and should not force my children to eat. I've realized that motherhood doesn't have to be so damn hard, either. It’s completely unnecessary to try to compete with others about the cleverest lunch idea, or to feel bad that your kids will only eat five things.

Since I started refusing to pack their lunches, I no longer feel like failure... at least about lunches, anyway. And for the most part, my kids actually eat what they pack in their lunches for school, which is kind of the point, right?

More Like This
18 Fun Mother & Son Halloween Costume Ideas
Where To Buy School Uniforms, From Jumpers To Dress Socks
These Back-To-School Supplies On Amazon Are Total Wins
18 Cute Notebooks That Make Every Subject Exciting