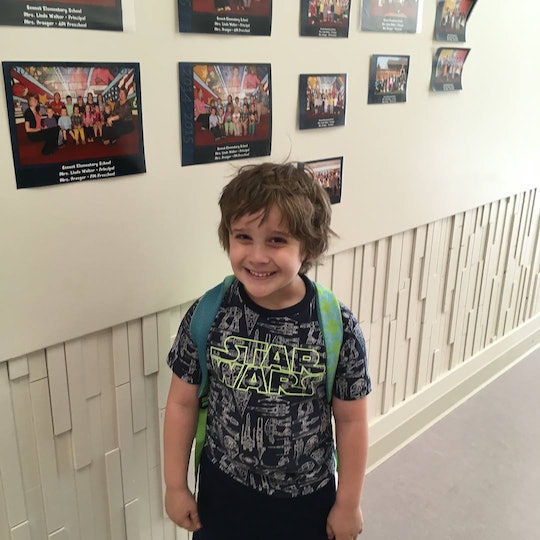 13 Kindergartners Share What They Wish Their Parents Knew About School

As I was coaxing my son out of bed this morning he whined, "But I don’t want to go to school." He says the same thing every morning, and it's usually him simply stalling. But today I asked him to tell me more. As a newly minted kindergartner, with just a couple of months of elementary school under his belt, it turned out he had a lot of opinions about how things are going at school. In fact, I'm realizing there are quite a few things my kindergartner wants his parents to know.

Turns out, my son didn't want to go to school because he wanted to stay with me and his little brother. So instead of being annoying my heart melted, since he's always been my little shadow and, well, it's nice to know some things never change. It also answered some questions about why he's been so jealous of his brother, especially since he started school. "When I fall down you aren't there to help me," my son said. "I have to go to the nurse's office instead of you. That makes me sad." Hello, emotional terrorism.

When I ask other parents to interview their kindergartners about the things they want them to know about school, they learned some new things, too. For example, parents heard all about how hard it is to adjust to a place where you have to sit still all day and listen to a teacher. Unsurprisingly, eating lunch is a big deal for kindergartners, too, who had many thoughts about things their parents should send for lunch and the food choices at school. They also had a wide variety of favorite subjects, and absolutely love recess. Thankfully, it seems that most of our kids are adjusting to being at school just fine. For more about what kindergarten is like from the kindergartners themselves, read on:

More Like This
How To Build An After-School Routine That Works For Your Family
These Back-To-School Supplies On Amazon Are Total Wins
18 Cute Notebooks That Make Every Subject Exciting
What Age Do Kids Start School? Here’s What You Need To Know