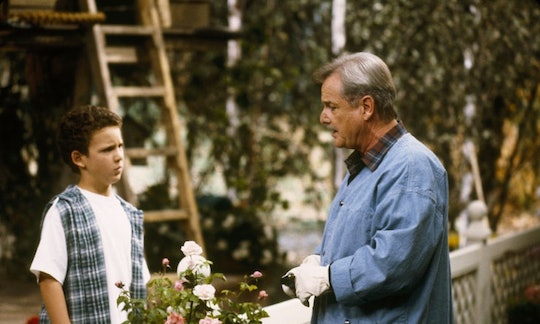 I Rewatched The 'Boy Meets World' Pilot & As A Mom, I Have *Thoughts*

Show me someone who has never watched Boy Meets World or who somehow never had an obsession with the cult TGIF comedy and I’ll admit that Cory wasn’t in the wrong when he kissed Lauren on the senior ski trip. In other words, that’s next to impossible, so I’ll hopefully never have to utter those blasphemous words out loud. But when I rewatched the Boy Meets World pilot as a mom, there were a lot of other aspects of the show that jumped out at me — other than the fact that Eric Matthews was always a babe and Morgan was always adorable.

I noticed that while watching the pilot episode, as a parent you can’t help but admire both of Cory’s parents, Amy and Alan Matthews. Forget about Cory's cool treehouse or awesome bike; now I just want to grow up to be as awesome of a mom as his was on the show. Even in the first episode ever, you can see that their family is tight knit and feels real, without being overly sappy or trying too hard to be funny.

Unfortunately, I also noticed (or maybe, realized that I forgot) that Topanga isn’t in the first episode, so despite all that talk of Cory and Topanga being meant to be from the age of two in the sandbox, her character did not start out as a prominent figure. As a whole, though, rewatching the Boy Meets World pilot did give me a lot to think about, so it's something I highly suggest doing, regardless of if you're a parent or not. But if you aren't a parent, you'll probably agree with me about some of these observations.

Call me controlling or a sometimes helicopter parent, or whatever other new parenting term they’ve come up with, but one of the many worries I obsess over with my son is what he eats. This is why I prefer to pack his lunch, rather than have him buy lunch at school (he’s in preschool though, so cut me some slack here). So when Cory grabbed a candy bar for breakfast from the school vending machine and said that he needed it to "wash down" the healthy cereal his mom had provided him, a little part of me hurt inside. Someone needed to put a lock on those sweet treats until at least after lunch was served.

Can Mr. Feeny Teach My Son About Life Someday?

Cory’s only in sixth grade in the pilot, and yet Mr. Feeny is already dropping some heavy truth bombs on him regarding love, life, and devotion a la Romeo and Juliet. Sure, it’s some heavy stuff, but it’s also awesome to imagine a teacher like that imparting their wisdom on your kid.

When Cory decided to "move out" and live in his treehouse, Amy totally humored him in the best way. She didn’t pull out the mom card and demand that he act a certain way or get in the house. Instead, she brought him dinner and even let him sleep outside. I mean, I don’t know how safe I’d feel for my kid sleeping outside alone, but she gave him space as opposed to crowding him or insisting that he simply cheer up.

But Is All Of The Pseudo Violence Necessary?

As a whole, it’s all harmless, but when you combine the toy gun, fake knife during the Romeo and Juliet reenactment in class, and the video game gun, that’s kind of a lot to handle in just one half-hour episode. That being said, we currently call guns "blasters" or "freeze rays" in my home and don’t really have any, save for some Lego-sized stragglers, so maybe that’s just me.

If I Ever Have More Kids, They Need To Be Like Cory & His Siblings

First, Cory was legitimately disappointed about missing a baseball game with his brother, but he still urged him to call his crush by the end of the episode. Then, Morgan and Cory had a freaking tea party together, during when he told his little sister, "No matter how old I get, I’ll always be your big brother." I don’t know if I’ll ever have more kids and I’m still figuring it out with my four-year-old, but if it ever happens, I’m pretty sure I’ll want them to have these kinds of relationships with each other. I've honestly never appreciated how adorable these siblings were together, even right off the bat.

I’m not going to say that the Boy Meets World pilot is particularly life-changing or that the later seasons aren’t full of comedic gold, but rewatching any classic TGIF show as a mom is bound to make you see things a little differently.