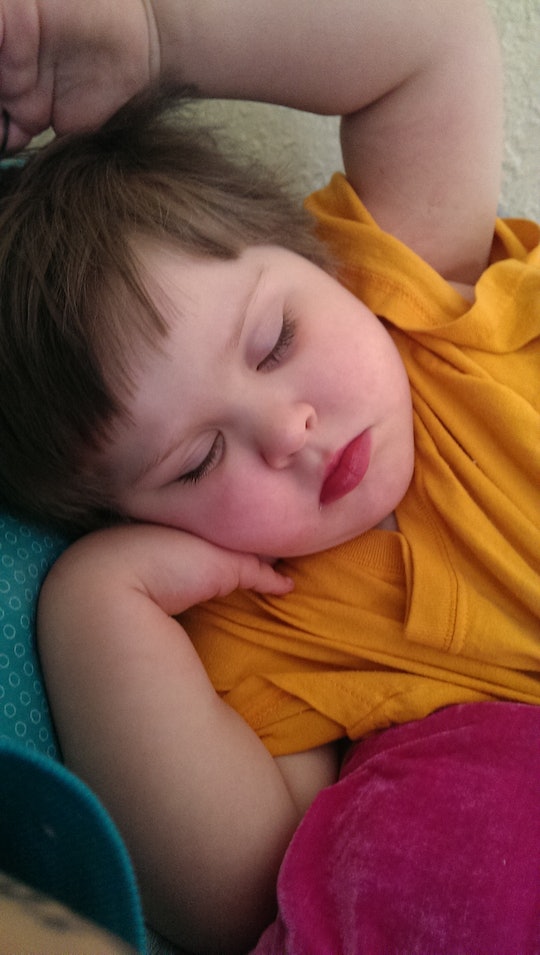 I Still Co-Sleep With My 5-Year-Old, & I Don't Care What You Think About It

I am a polyamorous parent, and my partners and I have co-slept with our 5-year-old, Arthur, on-and-off since he was a baby. He doesn't always co-sleep with the same parents: On the weekends, he usually sleeps with me, but I am prone to migraines if my sleep is interrupted too often, so sometimes during the week he sleeps in his room with his mom, or in his dad's room with his dad. Sometimes he starts sleeping in his room, with the full knowledge that if he gets scared or lonely he can crawl into bed with me.

Bedtime at our house is a bit like musical chairs.

Bedtime at our house is a bit like musical chairs: every night around 8:00 p.m. we start him on his bedtime routine, which usually culminates in him asking, "Who am I sleeping with?" It's not the most orthodox arrangement in the world, and I don't want to make any sweeping claims about co-sleeping based on our own experience, but it works for us.

Here's why co-sleeping was the best decision for my family — and here's how we make it work with Arthur.

At first, we started co-sleeping for one simple reason: Arthur's crib made me anxious. When he was first born, we had a crib built and waiting for him, but I couldn't bear to use it. He looked cold and lonely just lying there all by himself, and when I wasn't by his crib I would become incredibly anxious about his breathing. I'd lie in bed listening for his breath, ready to spring from my mattress and call 911 if it ever became slightly irregular. He felt so far away in the crib that I could barely sleep in the same room without him lying next to me.

At first, my partners and I weren't certain that it was safe for Arthur to sleep in the bed with us. (While there's much debate over the benefits of bed-sharing, the American Academy of Pediatrics has cautioned against bed-sharing with young infants, with a 2014 Pediatrics study reporting that 69% of sleep-related infant deaths were attributed to the practice.) So most of the time, he slept on the living room floor with his dad. When he got a little older and bigger, Arthur moved into the bed with his dad Jon and myself, and sometimes he'd sleep with his mom Sam for the night.

When Arthur was about 2-and-a-half, Jon and I officially moved him from a child's mattress beside our bed in our room to his very own room across the hall. Arthur was ready and excited for the transition. We thought our co-sleeping days were over, and they were for a while. Then we hit sleep regressions.

Shortly after Arthur turned 3, he stopped sleeping at night and started having nightmares. So we started taking shifts in his room to get him through the night. It turned out it was a lot easier to just bed down with Arthur in his room. If he woke up, say, crying over a bad dream, we were already there when he needed us.

Arthur wasn't alone in experiencing sleep regressions: they're fairly common, usually among children in the 8-to-9-month range. But that didn't make dealing with them any more pleasant. What did, however, make them a touch more bearable was co-sleeping with him, since we didn't have to actually get up and walk to another room to parent him.

Now, Arthur is in another co-sleeping cycle. Last year, he slept on his own a lot, and this year he's back to wanting to sleep with us. I think it has to do with the transition to kindergarten: he's meeting new people and spending a lot of time on his own, and he sees us a lot less often than he used to. So it makes sense that he'd want to spend more time with us when he's home.

In any case, we let Arthur determine where he wants to sleep and who he wants to sleep with. If the past year has been any indication, he'll likely sleep in our bed for a few months; it'll taper off, and then it'll pick back up again. He clearly derives comfort from sleeping with us, so why not continue to do it until he inevitably goes back to his own bed again? Besides, he's fun to cuddle with, and he snores a lot less loudly than his dad does.