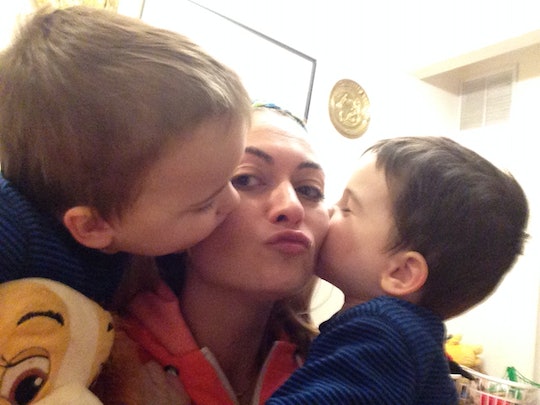 I grew up knowing I was my mom's best friend. As a child, knowing all of my mom's hopes and fears made me feel special, but it was just a tad daunting knowing parents don't have the world figured out just because they're taller than you are. As I got older, being my mom's best friend meant that I was better prepared for the realities of adulthood than some of my friends. Despite her steady job, I watched her worry about the cost of raising two children. I listened to her stories about being at work and learned that misogyny comes in many forms. And watching her interaction with my father (her ex-husband) and later the my amazing step-father (the man who deserves the title of being my dad) taught me the importance of knowing my self-worth in a relationship.

My close and honest relationship with my mom gave me a good idea of what to expect as I headed out into the real world. I had no expectations of a happily ever after with someone without hard work, and I knew happiness and success are goals, not entitlements. My own kids are only 3, so while the title of my BFF belongs to someone my own age, I wondered what it would be like to treat my boys as if they were my closest confidants. My own relationship with my mom is great, and I turned out pretty fantastic, so perhaps the secret to raising great kids is to treat them like your best friend.

For a full week I talked to my boys like I would my own mom or closest friends. They heard the good, the bad, and ugly of my life. They also heard the TMI. Would this be the start of a super close mother/son relationship, or are some things just not meant to be discussed with your own kids? I was, quickly, going to find out.

Raising twin 3 year olds is fun, but thanks to the fact that one of my boys rises before the sun and I have an incurable addition to Netflix, most days I wouldn't make it to dinner without copious amounts of caffeine. My typical exhaustion coping mechanism (besides a grande skinny cinnamon dolce lattes with whip) is to text my best friend to whine about it and live vicariously through her as she describes how her own 2 year old slept until 9:15.

Since my sons were pulling double duty as my best friends this week, this morning while they were brushing their teeth I noticed the bags under my eyes and told them how poorly I slept last night. Remy looked at me gravely and said, "Maybe you can have a binkie; you can have it, and then you can sleep." I love that he tried to offer me a solution to my problem, and although I passed on the binkie, it was a good reminder that there are things I can do, like go to bed at a more reasonable hour, to help myself not be so tired all the time. And I will... as soon as I finish this season of Jessica Jones.

Lolo ignored my comment at the time, but later that day he rested his head against mine and said, "Mommy doesn't feel very well." I was surprised that he remembered what I had said that morning. I'm really happy that I'm raising caring kids, but it's also a little scary just how closely they pay attention to what I tell them. I want them to understand sympathy, but at the same time I don't want them to overhear my mostly melodramatic complaints of being tired and think that something is seriously wrong with me.

Beyond understanding that we have to put the box of granola bars on the conveyor belt at the grocery store before we open it, my kids are too young to understand the concept of money — or so I thought. My partner recently found out that his salary this year is going to be cut by a pretty significant chunk, not enough to prevent us from paying the bills, but certainly enough that we'll have to be more careful about what we spend on entertainment, toys, and meals out. This would normally be something I'd discuss with my partner before leaning on my girlfriends for support, but since I was treating my kids like my best friends, I told them we didn't have as much money as we used to have to buy things. One of my boys responded this by telling me very gravely, "We have to pay for it first," which is what I tell them anytime they want to touch something in cart at the store, lest they break it or eat it before we even get home. The other ran to get his play cash register.

Now every time we go into the store and I put something in the cart, they try and put it back, telling me, "We don't have a lot of money, honey." Perhaps there's something to be said for teaching children that money doesn't grow on trees, but I felt really uneasy about this. It's embarrassing to know the cashier and people in line behind me now know about our money troubles. And as I said, we're not about to lose our housing or anything near that. At 3, my kids can't understand the nuances of a budget and I don't want them worrying that we won't be able to afford peanut butter when that's not the case.

I remember my own mom talking to me about late or missing child support checks and worrying about paying bills at a young age. I felt bad that she was upset, but what was worse, I hated that because I was far too young to get a job, there was nothing I could do to help her. I want my kids to appreciate the toys they have and the experiences we do as a family, but I don't want them worrying about bills unless they are their own.

Gossiping With The Kids

My mom and I will randomly text each other silly videos or movie quotes or call each other just to tell a funny (read: embarrassing) story that just happened to us that only the other can understand. And my friends and I can have hours-long conversations about clothing, parenting, politics, and whether or not we think Steven Avery is innocent.

However, my kids can barely stop yelling long enough for my partner and I to ask each other how our day was, so there was no way they were interested in hearing my latest theories about House of Cards. They did pay attention when I told them that if a man named Donald Trump became president we may be moving to Canada, but only because they got excited over the idea of a long car ride. When it comes to social interaction, I'm sticking with people my own age.

On Sex And Relationships

With the exception of one afternoon in college when I arrived home earlier than expected, I thankfully know very little about my parents' sex life, but my status as my mom's best friend means I've been called on to mediate arguments between the two of them a countless number of times.

When it comes to my best girlfriends and the relationships we have with our significant others, nothing, and I mean nothing, is off the table. I love being able to talk open and honestly about sex and my marriage with my closest friends while knowing they're never going to judge me for the things I say, but I just couldn't bring myself to broach these topics with my own kids. Talking to your toddlers about sex is good, but talking to your kids about sex with their dad is 50 shades of awkward.

Beyond the fact that they're far too young and immature to understand any of it, I don't want to start complaining about my marriage in front of the kids because I know what it's like to be asked to choose sides, and I don't think that's beneficial for any child/parent relationship.

That's not to say my partner and I don't fight in front of the kids. In fact, I prefer when we fight while the kids are around because it both keeps us adults from losing our tempers completely and will hopefully model a healthy and respectful relationships for our kids.

Are My Boys My Best Friends?

I love my kids completely and I always want them to feel comfortable coming to me to talk about anything at all, but although they are hands down two of my favorite people on the planet, I don't want to burden them with the task of being my best friend in addition to being my child. They also just can't relate on a level my IRL friends can, and when you're swapping stories or searching for advice, being able to relate on a very real level is important. My boys, though they tried, are just too young to get it.

The best friendships are ones where both parties can lean on each other for support, and I feel like my role as a mom is to be there for my children unconditionally without requiring them that they also be there for me. I've witnessed adult relationships between parent and child where the child does just as much parenting as the parent does. For me, if my kids come to me to talk about a problem they're having, the last thing I want to do is burden them with my own issues on top of their own. The world can be scary, and as a mom I want to be a rock for my kids they don't have to worry about. I'm lucky enough to have amazing women in my life (my own mom included) and a great partner I can turn to for everything from the silly to the serious, so I don't need to look to my children to fill the role of friend in my life.

They're my best boys, but not my best friends. Sorry, guys.