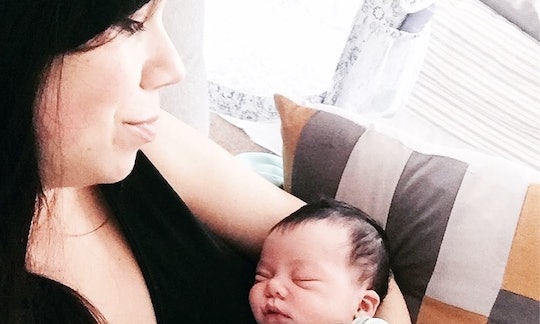 Before my daughter was even born, I had formed a solid plan in my mind: I’d exclusively breastfeed her for at least six months, but hopefully more like a year. It’s not that I was militantly pro-breastfeeding; it was more about wanting that bonding time with my baby, and looking forward to those post-feeding session snuggles. Also, if I'm being honest, no one had really talked to me about an alternative. Everyone assumed — my OBGYN, my pediatrician, my family even — that I would be breastfeeding. If I had even an inkling of the challenges of exclusively breastfeeding, I had no clue how exhausting exclusively pumping breastmilk would turn out to be.

Although my daughter latched almost immediately after birth, and we enjoyed plenty of sweet cuddles in the first few weeks of her life, I hadn’t accounted for the exhaustion that comes with those 2 a.m. (or 3 a.m. or 4 a.m.) feedings. I hadn’t considered the emotional labor that coincides with being the only person keeping track of when she last ate, which breast I started with, and how long she’s nursed on each side. And I definitely didn’t think about what would happen if my baby had reflux, which could make feeding painful and uncomfortable for her — but that’s exactly what went down.

Right around three weeks' old, my husband and I noticed that our daughter was getting increasingly fussy while feeding, and would spit up constantly. It honestly seemed like she was spitting up almost everything she was eating, even though she was gaining weight and producing wet diapers. At night, she would make gurgling noises in her sleep because lying flat on her back was uncomfortable. At her one-month checkup, our pediatrician diagnosed our baby with reflux.

Infant reflux is super-common, and happens when food backs up from their stomachs into their oesophagus, which causes the baby to spit up. And while reflux usually resolves itself around one year of age, those first few months can seem long an eternity when dealing with a baby who is uncomfortable or in pain.

I was standing over her bassinet as she wailed, trying to replace a fallen pacifier while simultaneously pumping milk and shooing away the cat ... Exhausting doesn’t begin to describe it.

My pediatrician recommended that we start our baby on a new feeding routine of expressed milk combined with 1 tablespoon of infant rice cereal. She explained that this would thicken the milk, which would help her keep it down. As a precaution, she also wrote a prescription for baby Zantac, but urged us to try the rice cereal first. Thus began our adventures with exclusively pumping breastmilk.

Initially, I was just excited to have a plan in place to help our baby. I figured I would do whatever it took in order to make her feel better, and if pumping milk was the answer, then so be it. I equipped myself with all of the necessary supplies: a double electric pump, a hands-free pumping bra, a huge water bottle, and tons of snacks. But I had no idea what I was in for.

We tend to conflate elements of breastfeeding — bonding, nourishment, hours devoted solely to your child — when in fact these pieces sometimes wind up separated. Sometimes you end up spending hours pumping alone so that you can nourish your kid, but feel like you're missing out on the satisfaction of simultaneously feeding and nourishing, of feeling like the exhausting hours spent expressing milk comprise bonding time.

I’m starting to feel like all I do is pump ... when does my body just go back to being mine?

I’m the only one home during the weekday with my daughter, so my days have become a blur of pumping and feeding. The only time I can pump is when she naps, and because newborns are humans and not robots, her napping schedule is wildly inconsistent. Just yesterday, I was standing over her bassinet as she wailed, trying to replace a fallen pacifier while simultaneously pumping milk and shooing away the cat, who was attempting to eat the lunch that I had left out on the table for myself (but never got around to eating). I started crying from the frustration of doing ten million things at once. Exhausting doesn’t begin to describe it.

To make things worse, I have a fairly slow let-down, which means that each pumping session takes forever. I’m starting to feel like all I do is pump, and it’s draining to have my breasts hooked up to a machine for so much of the day — especially after nine months of pregnancy, labor, and delivery. When does my body just go back to being mine?

While I don’t miss my daughter fussing at the breast while nursing, I do miss those post-feeding snuggles. It’s not quite the same when she’s drinking from a bottle. There’s a part of me that feels like I failed in some way; even though she’s still getting breastmilk — I am nourishing her, devoting time to supplying her body with the fuel to grow and thrive — the fact that I’m not nursing her has struck an unexpected chord within me. I’ve wondered, quite often, if there was something I could have done differently.

On top of the feelings of guilt, sadness, and exhaustion, I’m finding myself feeling angry. Not at my daughter, of course, and not even at myself, but at the heaping amount of pressure society places on new moms, and, in turn, the pressure we put on ourselves. At the end of the day, the most important thing should be the health and well-being of our babies. Whether they’re fed by nursing, expressed milk, or formula shouldn’t matter — and yet, for so many of us, that’s all that seems to matter. We have to recognize the emotional cost of those pressures, and we have to talk about it.

So to all the other exclusively pumping moms out there: I know how much it sucks. I know how draining it is. I know it feels like there’s nothing else you do all day. And here’s the thing I really, really wish someone would just say to me: It’s OK to stop. It's OK. Take care of yourself first, because your baby needs you — not just your milk.