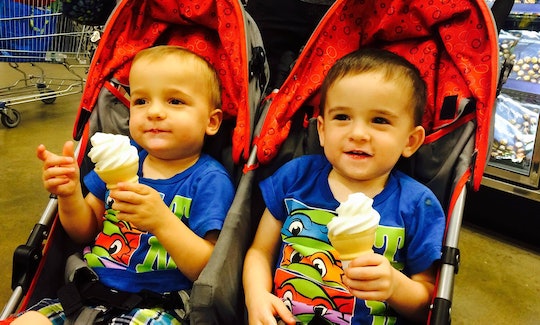 Going into this whole parenting gig I knew there would be hard parts. Not many parents of newborns claim to be well rested and I speak from experience when I say the Terrible Twos are definitely real (and definitely terrible). But one of the hardest parenting tasks I've faced thus far is trying to potty train my twin boys. For the better part of a year I've read them potty-training books, created elaborate sticker charts, and straight-up bribed them with candy in an attempt to get them to use the bathroom. Although we've had the occasional day of success, they're still #TeamDiaper all the way. As much as I adore their tiny tushes, I am so over wiping them, so I decided it was time to get creative with potty training.

Like most other millennial women with kids, I am nothing without my smartphone, particularly because I use apps to organize everything. Logging my runs, banking, and even weekly meal planning are all done on my phone, so it seemed like a safe bet that when it came to potty training, my phone wouldn't ever let me down. I decided to test out five potty training apps in hopes of getting my kids to say goodbye to diapers forever.

I road-tested five potty training apps to see which were the most effective at encouraging my 3-year-old twins to use the bathroom so we can say goodbye to diapers once and for all. I hoped that the apps wouldn't just excite the boys with their cool visuals and characters, but that they'd actually offer us all some concrete assistance in the potty-training game. Here are the hits, and unfortunately, the misses.

Even though I personally find his habit of talking in the third person a little obnoxious, my kids adore Elmo, so I thought this app ($2.99 in the app store) would help make the idea of using the potty more appealing. The app works like one of those books we all had as kids where there are buttons that make sounds as you read along. But like many of the people who reviewed this app online, the sound wouldn't work on my iPad, which made my kids freak out and cry. They tried to ask "daddy to fix it," but even my partner was helpless in this round of man versus computer.

Even if the sound had worked, I'm still not 100-percent sure that this app would've worked for the boys. We already have a hard copy of an Elmo potty book that is pretty much the exact same story, and despite their love for Elmo, it just doesn't seem to be helping them feel comfortable on the potty. I have half a mind to march down to Hooper's store and demand a refund, but I asked Siri and she can't tell me how to get to Sesame Street, so I guess I'm out of luck.

Next up was Pull-Ups' very own potty app. I really liked that I could create different profiles for multiple kids, even if it doing so only allows you to track one child's progress at a time. I get that not everyone has kids who are potty training together, but I do, and having that feature would've helped.

I was excited to see this app had a timer that would go off and remind you when it was time to use the potty, since I feel like I never know how often to take the kids to the bathroom, so I set it for the recommended 45 minutes and went about playing with the kids. It was nice not having to watch the clock to remember when to put the kids on the toilet, but unless I messed up the settings, this timer only goes off when the app is open.

While the falling confetti scene that serves as the timer page is soothing in an early-2000s screensaver kind of way, it's not really helpful to have to keep the Pull-Ups app (which is free) open all day long. We lost track of time because of that and both boys had an accident first thing in the morning, which soured them on trying to use the potty for the rest of the day. This app gathered a lot of information, like if the child was wet or dry when the timer went off, but I couldn't figure out how to view the statistics in a single chart or screen to assess progress. (But that could be because I didn't know how to use it.)

At first I honestly wasn't sure how helpful this app would be in actually getting my kids to use the bathroom, but as it turns out it was far more helpful than the timer apps.

There are games your child can play as a reward if they goes potty, with more games unlocked after certain periods of success. The games were interactive too, like blowing out birthday candles using the mic on your phone, and even I found them fun. I like this as a way to encourage potty training without using candy as a reward system, so I may try it again with a separate timer that will go off no matter what.

My kids are huge fans of Daniel Tiger's Neighborhood, so when PBSKids reached out and asked if I wanted to try their potty training app ($2.99 in the app store), I couldn't say yes fast enough. I was surprised to learn that this app doesn't have a timer function or reward system for using the potty. Instead it uses games to focus on getting kids to recognize the signs of needing to use the bathroom and the steps you have to take while in the bathroom.

There's a block-stacking game and a water fountain game and as your child is playing one of the characters will start to squirm until you take them to the potty. Then you have to help them use the bathroom, wipe, flush, and wash their hands. (If you are a fan of The Sims game you absolutely will find yourself playing with this app after the kids go to bed).

At first I honestly wasn't sure how helpful this app would be in actually getting my kids to use the bathroom, but as it turns out it was far more helpful than the timer apps. After playing with the games they started saying things like, "I really, really need to go potty, but I don't want to stop playing, " or sang, "If you have to go potty, stop, and go right away," just like Daniel. My kids respond really well to routines, and as an adult I forgot just how many steps there are to going to the bathroom beyond just, you know, going. It's nice that this app gives my kids an easy-to-follow pattern (with a very catchy song) when going to the bathroom.

Fair warning though: If you try this app, be prepared for your kids to call you out on not following all the potty steps. I took Remy with me to the bathroom in a crowded train station and to my total embarrassment he had no issues admonishing strangers for not washing their hands after using the bathroom.

The coolest part of this Potty Trainer ++ app (free with in-app purchases) is that you can record a voice message to play for your child when it's time to use the potty. Since my boys worship at the altar of Grandma, I thought it would be great to have my mom record their potty message. But the shortest timer increment on this app is an hour, which may be good for kids who are already semi-established potty users, but wasn't helpful for my newbies.

The font and user interface on this app isn't very child friendly either (though it worked for me) and even though it has a virtual sticker option, the free stickers are nothing my kids got excited over. There's this little graduation hat that changes colors as you level up in terms of potty success, like advancing to different belts in karate as your skills improve. This sounds great in theory, but try explaining that to a distraught 3 year old who loves the color orange but has advanced to another color. Lolo was so upset he refused to use the potty for the rest of the day.

This app also had the option to share your child's progress on Facebook, which, even in this era of social media, I thought was the very definition of the word "overshare."

Like the Daniel Tiger potty app, this Potty Time app (free with in-app purchases) also does not have a timer. Instead we have Miss Rachel, a bubbly woman who will "call" your child with an encouraging message both when they have a potty success or a mistake. The video plays by accepting the call and looks a lot like the FaceTime screen, which made my kids believe they were actually talking to Miss Rachel, so they took her very seriously.

The app has videos and a matching game as well as a sticker chart, but what really sets it apart is that Miss Rachel signs while she talks to you. At the very least, I like how it shows sign language as a form of communication. You also have the option to share your child's potty-training progress on Facebook, but besides maybe a grandparent, who in your social circles would really want to see that?

Did Using An App Lead To Easy Potty Training?

Want the truth? We're still working on it. I've come to realize that potty training is definitely not something that happens overnight and the more I stress about getting the kids potty trained, the more my kids are going to stress. And having the timer apps made me feel more in control of the situation and calmer when they had an accident, because I felt like those mistakes weren't my fault since I was following the apps' instructions.

The potty-training games captured my kids' interest enough that they seem excited to use the potty more often. I know there's got to be a light at the end of the potty-training tunnel, I just hope it's before they're old enough for high school.