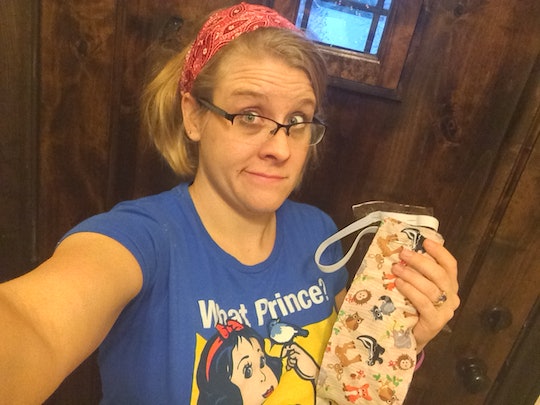 I Tried To DIY Vintage Menstrual Gear On My Period

On the morning of President Trump’s inauguration my uterus revolted, and I started bleeding from my "wherever" five days sooner than I’d expected. I’d been following the Women’s March on Washington movement and it got me thinking about all that women have overcome in this century, and all we have yet to fight for. In solidarity for my foremothers who have blazed that path for me, I decided to celebrate my first menstrual cycle with President Trump by channeling my inner suffragette and using turn-of-the-century vintage menstrual products for the week of my period, namely a sanitary belt, a reusable pad, and free bleeding like my foresisters did.

Periods at the turn of the century were fewer and farther between than they are now. Because of societal pressure and expectation, and without reliable birth control, women were pregnant and breastfeeding a lot more often. Not to mention, their diet and physical demands were far greater, which delayed and often prevented menstruation. They typically started later than we do now, getting their first periods in their mid to late teens. And their menstrual years ended as early as their forties. For centuries women did nothing to catch or slow their flow, but at the turn of the century some new products began to emerge, such as reusable pads and something called a sanitary belt.

I wanted to try some of these revolutionary solutions, but I realized that some of these antique contraptions would be impossible to obtain. So I checked out the Museum of Menstruation’s website, and I zeroed in on some of the ones I thought I could either fashion myself or improvise with. I started my very own period Pinterest board and chose three period solutions from the turn of the century to test out: menstrual pads, a Hoosier sanitary belt, and free bleeding.

My period typically lasts five days, and I wanted to be able to try all three options, so I planned to use each one for a day or so, then rotate through until my cycle was complete. Because Aunt Flow showed up early, I had to throw in the reusable pad as a fourth option. But that still left me four days to try the others.

I thought by walking a mile in my ancestors menstrual gear I might better appreciate their struggle and appreciate my privilege a bit more.

Since I’d been ambushed by an early flow, I started this experiment using one of the more modern innovations of the turn of the century: the reusable pad. World War I nurses capitalized on the absorbency of the cellulose bandages they used on wounded soldiers, and soon after Kotex mainstreamed the idea of the disposable pad. It felt a little like cheating to use a regular pad, but it was technically available during the suffrage movement, so I wore it until I could get to the fabric store to grab supplies for the cloth ones. They didn’t have adhesive pads back then like we do now, but that was fine since the stickiness usually just grabs hold of my tender inner-thigh meat and gave me an uninvited wax job. I used the pad without the stickiness to maintain authenticity.

I took my 4-year-old daughter with me to get supplies, and I let her choose the waterproof fabric for the cloth pads. I thought it very suiting that she chose such a nature-filled pattern, since periods are the most natural thing in the world. But I doubt any woman in 1901 had cartoon squirrels and foxes on her undergarments. Real fox fur pads were much more likely.

I’m afraid I’m permanently scarred with the indentation of the Hoosier Hell Thong.

I got home and whipped up my first reusable pad. I’d read that women used strips of cloth and rubber or sheepskin shields and that the use of cloth strips is where the term “on the rag” originated. Charming. But the closest thing Jo-Ann Fabric had to rubber or sheepskin was waterproof fabric for cloth diaper covers. Luckily, I had some prefold diapers from my daughter’s cloth diaper days, so I combined them to make some pretty adorable blood catchers.

The only catch is that I reread the articles, and the brief style of underwear we know and love today didn’t come about until about the 1930s. That meant that most women used a belt-type apparatus to hold their long giant pads in place, and they went sans underwear. If they didn’t have a belt, they would just shove a strip of sheepskin and cotton between their legs and hope it stayed in place. One woman said her grandmother remembers hers falling out on the floor quite often. I’m assuming thigh gap was seen as undesirable back then, which means I would’ve been the epitome of a womanly body. I didn’t want to cheat, but I’m not much of a skirt kind of gal in the winter. So I shoved the ole’ squirrel cloth between my thighs and threw on my yoga pants. I’ll admit it was much softer than modern pads, and again no sticking to my thigh meat. But it did wander a bit. I should probably work on closing that thigh gap a bit more. But it totally contained my flow, and I had zero leaks.

I’d made a few spare pads, but at night I was a little worried about it sliding around without undies. Still, I wanted to give it a go, so I went free-balling with my pajama pants and the woodland creatures tucked in for the night. I must have slept hard because the pad pretty much stayed in place, and I didn’t have a problem until I stood up the next morning. The pad had somehow shifted and rolled all at once, and it slipped down my pant leg onto the floor. But thankfully for whatever reason this period just wasn’t as heavy as usual, and we had no linen casualties.

I crammed a fresh pad between my legs, and I went upstairs to make the granddaddy of all menstrual monstrosities: the Hoosier sanitary belt.

The menstrual belt effectiveness was great, and again, I had no leakage. My flow actually seemed to be incredibly light. I’m not sure if it was the change up in products I was using or just an unusually light cycle. But either way, I was happy.

I’m sure Mike Pence is proud to know that this bad boy originated in the great state of Indiana. I made a note to let him know on the Periods for Pence Facebook page. This contraption looked terrifying, and I wasn’t sure where to find one. So my best bet on short notice was to try and fashion one myself. I looked at patterns for sanitary belts, and what they all basically had in common was an elastic belt with a cloth pad clipped or pinned to it. I got some more of my waterproof woodland fabric, an old cleaning cloth, and some furry fleece, and I sewed a few long pads to look like the ones in the ads. I used safety pins to secure the pads to the belt, which was terrifying. Sharp needles near the hoohah were probably the least of the suffragette problems, so I checked my privilege and went downstairs to try it on.

I came down with my new fancy belt, and my husband asked WTF I was carrying. I explained what it was and he thought I was joking. When I walked in the living room a while later he asked if I was wearing it and I told him I was. He begged me to show him, and I’m pretty sure he laughed so hard he needed a menstrual pad. He whipped his phone out and took some of the worst pictures I’ve ever seen in my life. I looked like a woodland sumo wrestler, and we laughed our asses off. But the menstrual belt effectiveness was great, and again, I had no leakage. My flow actually seemed to be incredibly light. I’m not sure if it was the change up in products I was using or just an unusually light cycle. But either way, I was happy.

I put a new pad on the belt after my shower and hopped into bed. My husband snuggled up and whispered for me to just unbutton the front pins. I have no idea what is wrong with that man. I caught a glimpse of my ass in the mirror wearing that thing and there’s no chance I wanted to do anything remotely sexy. He’s clearly broken. I declined the invitation, and rolled over to sleep. Again, I was free-balling because, research. And I woke up the next morning to a leak-free bed. However, I clearly chose the wrong size elastic. It was the same width as the pictures, but dear sacred Jesus, the belt had dug itself into my sides, and I’m afraid I’m permanently scarred with the indentation of the Hoosier Hell Thong.

My flow had basically slowed to a halt by day three, but I continued on with the menstrual belt for the morning. I did, however, have to roll my pants under the elastic to keep it from killing me. Either women back then just dealt with the pain and chafing, or their hocks weren’t as tender as mine. I wore the belt until about noon, when I decided it was just working as a big sweaty diaper thong. I took it off and decided to go with the last experiment: trying out free bleeding.

Before the fancy shmancy days of pads and tampons, women were just like IDGAF, and they “left a trail of blood behind them,” as the Museum of Menstruation and Women’s Health so eloquently stated. I was only on day three of my period, but I really didn’t seem to need anything to catch the discarded remains of my angry uterus, especially nothing as heavy duty as a two-foot long diaper in my pants. So I shed all my appliances and just let it flow. I did cheat a bit and I put on some black panties, but I rationalized that I needed to see if free bleeding was going to ruin my clothes like the ladies' back in the day. And since I didn’t have a petticoat to ruin, I went with a pair of high-waisted black underpants. I didn’t really have any leaks that couldn’t be taken care of with a quick rinse, so I’m actually giving the free bleeding experiment a thumbs up.

By day four my period was totally done. This cycle left just as swiftly as it came, and so I started to wonder if the shortened duration was due in part to the experiment. Maybe my uterus appreciated the soft woodland creature fabric near the entrance to the park rather than jamming dry cotton tubes up near the floodgates? Either way, I’d made it through my freakishly short cycle using the blood-catching techniques of my foremothers. And I guess it did give me pause to reflect on how far we’ve come in regards to our views on women’s bodily functions. In the time of the Hoosier belt, women were given "silent coupons" to present discreetly at department store counters in exchange for an expensive disposable menstrual pad, whereas just this morning I was explaining Diva Cups to my 7-year-old daughter in the grocery store as easily as if she'd asked me what quinoa was.

And at the very least, I came away from this experiment with a brand-new set of fuzzy squirrel pads. So all in all, I’d call this a win.