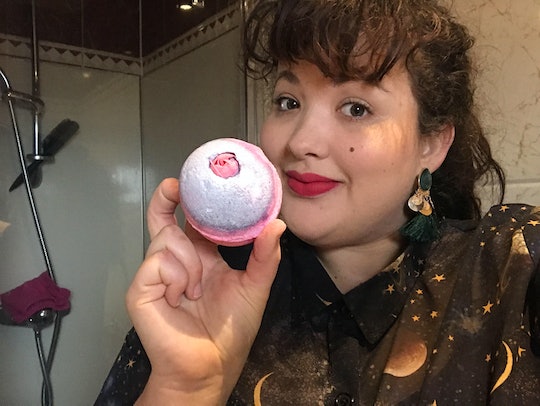 My father-in-law calls babies "the best birth control out there" and I totally get it. It's not uncommon for couples to have less sex after having children, particularly in the early months of new parenthood. As this has admittedly been the case for my partner and me, I recently decided to test out LUSH's Sex Bomb. Could the allegedly aphrodisiacal bath bomb prompt me to get it on? It was a somewhat unconventional, kooky method, but perhaps that's exactly what I needed.

Likely because of a combination of sleepless nights, the ensuing physical exhaustion, the grueling recovery that came with delivering a small human, battles with postpartum depression, and the complete upheaval of life and identity that have resulted from being a first-time parent, my sex life hasn't lived up to my once-a-day preference for some time.

I come from a family that likes to devalue sex and intimacy — aspects of a relationship that many don't believe are as important as a shared sense of humor or spiritual values. This has never been my way, though. Sex is a tool for me to connect and reconnect with someone I care for. To communicate through my body, rather than my words alone. To remind myself that the bond I have with my now-husband transcends our mutual interests in sci-fi or orange-flavored chocolate. I've struggled to cultivate the energy and horniness needed to experience all that as of late, but I definitely miss it.

According to LUSH's website, the Sex Bomb — a beautiful pink and lavender product topped with real rose petals — is made with jasmine, clary sage, and ylang ylang, all believed to be powerful aphrodisiacs by "alternative lifestyle" herb specialists, love and sex writers, and aromatic Kama Sutra-inspired merchandise alike. The soy milk in the bath bomb is also said to "soften up your entire body," which seems like a good ingredient in the recipe of kink.

All that in mind, I committed to taking three nightly soaks in the stuff (in case the effects were cumulative). Here's how my libido fared.

I normally take an evening bath with my daughter, who is now 11 months old. Baths used to be a sacred ritual for me — an easily manageable form of self-care during which I could catch my breath and relax after a full day. While I enjoy my new nighttime routine, I miss being able to unwind for a solid half an hour.

On this first night, I decided to bathe alone in order to reap the full benefits of the bath bomb. I figured the relaxing, lust-yielding effects wouldn't really hit me if I was also contending with splashing baby hands and the concern that my kid might poop in the water.

I just wanted to burrow into the covers and sleep. Did I do something wrong, I wondered?

As I watched the Sex Bomb disintegrate under the tap, I grew excited by just how pretty the colors were. I've tried a lot of bath bombs in my day, but these rose and purple hues made for one of the most gorgeous experiences to date.

The thing also smelled amazing. As each scent wafted into my nostrils, I started to feel more relaxed than I had in a while. The rose petals felt soft against my skin and I loved the milky texture of it all.

When it came time to climb into bed with my partner later that night, however, I had little desire to put the moves on him. Feeling slightly more relaxed than I typically do these days, I just wanted to burrow into the covers and sleep. Did I do something wrong, I wondered? Was I supposed to soak for longer? LUSH's site didn't specify as much, and I fell asleep feeling a little disappointed in just how little sex was being had.

I was feeling a bit cynical as I climbed into the bath on the second evening. Orgasms had eluded me and some bath bomb gunk from the evening before was making the tub feel scratchy. For the sake of my relationship, I persevered, though.

We had some pretty steamy sex. And for the first time in what felt like months, we had sex that seemed to last hours.

On this night, it struck me just how intense the scents in the Sex Bomb actually are. LUSH's bath bombs are always a delight (shout-out to the Jelly ones), but the jasmine in this one was something else. Although the clary sage and ylang ylang were lovely, it was the jasmine that seemed to seep into my whole body, leaving me feeling somehow lighter.

Unfortunately, the Sex Bomb didn't make me jump my partner anymore later that night than it had the evening before. I felt more chilled out, sure, but that just made me want to sleep. Peaceful slumber took over me for the following two hours, until I was woken by my daughter's first bout of crying of the night.

On day 3, my husband and I both worked from home. Come the early afternoon, we found ourselves in an unusual situation. We were truly alone, as my mother-in-law had taken our daughter to a play group.

For the first time that week, we had some pretty steamy sex. And for the first time in what felt like months, we had sex that seemed to last hours. I can't say that it was the Sex Bomb's influence so much as the spontaneity of it all, though. For just a couple of hours, we were feeling young and wild, and free of obligations. The rareness of that alone time was enough to get us in the mood, I guess.

The post-coital bliss lasted throughout the day, and I got into my third bath in the hopes that maybe, just maybe, we'd get to bone for a second time in a 24-hour period. I ever-so-briefly felt 21 again as the idea swept over me.

Alas, the sex and the remainder of the afternoon — marked by a fussy, cold-ridden baby — had left me tired. I was excited to hop into bed with my boo, but all I wanted to do was catch up on Transparent and Star Trek: Discovery.

Guess My Libido Is Still In Flux

Although the Sex Bomb definitely made for a tranquil, pretty evening, I cannot say that it had any notably positive effects on my sex drive. My partner, who hopped into the bath after me one night, agreed that it was one of the more relaxing bath bombs we've ever tried. I suspect that, for some folks, the strong yet warming fragrances are sources of nostalgia. Perhaps it's that nostalgia that makes them want to get it on.

Having no strong ties to jasmine, cary sage, or ylang ylang, this simply didn't happen to me. Taking a little bit of time to unwind was definitely refreshing, and something I'd advise any parent to do. When it comes to rekindling the spark with your loved one, however, I suggest investing your $7.95 in kinky body chocolate or a bottle of wine instead.

More Like This
6 Sex Positions To Reduce Leg Pain
How To Support A NICU Parent, From Moms Who’ve Been There
Queen Elizabeth II's Most Romantic Quotes About Prince Philip
Introducing My Boyfriend To My Kid