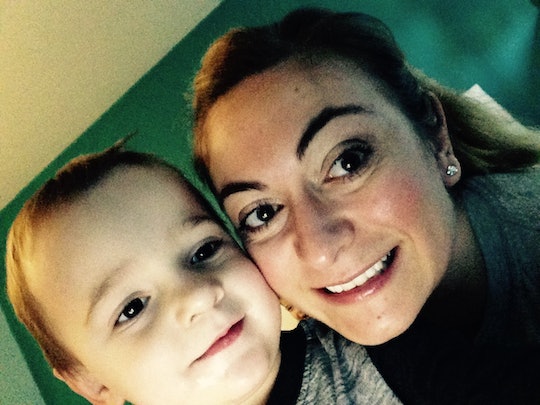 I Tried Parenting Like A "Tiger Mom" & This Is What Happened

When I think of the term "tiger mom," I think of over-scheduled kids with high GPAs and dismal social lives who either rebel in college or wind up with poor parental relationships as adults. But the two daughters of Amy Chua, the mom who literally wrote the book on being a tiger parent have recently spoke out about being raised by a tiger mom and claim they're better for it. They say their mom's strict methods — no television, high academic expectations, and hours of daily musical practice — worked. Not only did both girls end up at Ivy League schools, they also recall their childhood as "a tough childhood, but a happy one."

My kids are only 3 years old and aren't due to start preschool until this fall, but at the school's open house last month I couldn't help but notice some of the other parents highlighting their kid's academic prowess, even at this young age. My own kids were happily checking out the classroom's awesome kitchen play set, but other kids were reciting the days of the week, naming states on a map, and playing ring toss so well that I'm sure I'd lose against them.

Seeing what my kids' peers were doing, I started to wonder if perhaps my laid-back parenting approach is preventing my boys from future success. I decided to try my hand at being a tiger mom in hopes of helping my children become high achievers.

For one week I channeled my inner tiger mom and kept my kids on a tight scheduled filled with athletics and learning with very little downtime. I pushed them to work towards perfection and only praised them when they truly accomplished something in hopes of encouraging their concentration skills and focus. Here's what happened.

No Screen Time Means No Down Time

We started our day practicing drawing letters, then moved on to number and word flashcards, followed by alphabet puzzles. Then it was snack time and after that, time to read books. Once that was finished, we practiced throwing and kicking a ball until lunchtime. After lunch I tried to get them to draw letters again, or read some more, or use their cars or blocks to try and teach them how to count. We repeated these activities until which dinner, by which time we were all cranky and a little bit sick of each other.

I always engage in plenty of hands-on play with my kids, but ever since they stopped taking an afternoon nap I've earmarked after lunch as the time when we snuggle up on the couch for some Netflix and chill time to watch a show and relax. It's a nice break for me to check my emails on my phone and not have to constantly entertain them, plus I encourage them to watch education shows like Little Ensteins or Sesame Street so there's some learning mixed in with their screen time. But tiger parenting means no television, education or otherwise. The lack of independent play and no screen time was hard on all three of us, and I really do think they benefit from watching their educational cartoons. Once, for instance, Lolo started sounding out letters just from watching SuperWhy.

I understand limiting a child's screen time so they have more time for learning, or making sure the content of what they're watching has value beyond merely being entertaining, but this complete ban made parenting more stressful for me. Given time I can easily see how an older child could resent not being able to watch the same shows as their friends.

Although I have a decent sense of rhythm and ball and like to run, I'm not the most coordinated person, and neither is my partner (I'm not throwing him under the bus; I asked, and he agreed wholehearted). Because of this, we haven't really focused on our kids' athletic skills, a fact that's glaringly evident whenever I see my best friend's 2 year old throw a near-perfect curveball.

I've used the boys' premature birth as an excuse for their subpar gross motor skills, but since being a tiger mom includes striving for athletic excellence, each day this week I made the kids try to kick a ball and play catch. They didn't always like being forced to play. They still don't fully understand that playing catch requires some distance between the two players and some throws go rogue while others fall straight to the floor in front of them.

It's clear they're never going to be drafted by the NBA, but after a week of practice there was definite improvement in their ball-handling skills. Though I don't think the tiger-mom method of forcing a child to practice a sport for hours on end in hopes of Olympic caliber excellence is one I'll be doing long-term, there is something to be said for encouraging kids to try and improve at an activity they struggle with.

I plan on pulling that rejected basketball hoop out of the basement and giving it another go this summer, knowing full and well that they're not going to be the next Lebron.

I work really hard at treating my twins like individuals, which includes comforting them in different ways and encouraging their unique talents. Lolo loves letters, reading, and building things, and Remy is more into sorting, imaginative play, and drawing. Because being a tiger mom places a heavy focus on academic achievements and only calls for praise when there's academic or athletic success, this meant I wound up giving Lolo a lot more praise than his brother.

At first Lolo lapped up the attention, but after a couple days he seemed sad that his brother wasn't getting his fair share of compliments. He'd say, "Wow Remy!" or "Remy good job too!" to try and draw my attention to the fact that I wasn't praising them both. It's awesome knowing I'm raising a kid who's so kind, but this heavy emphasis on school highlighted what I think is one of the biggest issues with being a tiger mom: I think praising my kids equally is important.

Some kids might see the lack of praise from a parent as a reason to try harder, but Remy often got frustrated and gave up on trying to learn. At this age, learning should be something that's easy and fun, so him feeling like he failed was really upsetting for me. There's so much more to learning than test scores and grades, and there's more to raising a happy, healthy child aside from athletics and academics. Tiger moms seem to forget that too easily.

Playing Is A Way To Learn

As a tiger mom I led my boys through structured activities all day long. They always started out a new activity strong, but after a while they would lose interest and flop down on the floor like rag dolls, walk away, or just scatter the flashcards out of my hands to try and get a reaction out of me. I suppose a true tiger mom would put them in timeout until they were willing to go back to learning, but I totally understood where they were coming from. At this age much of their day involves play, and they get just as much learning out of that as they do with structured activities, so it seemed silly to try and prevent them from playing.

I justified this by telling myself I wasn't failing at the experiment, it's just that playing is really just another way of learning. When a block tower falls down, they're learning about physics, and when they play house with their play farm, they're learning social skills. (I'm not quite sure what they're learning when they line up their toy cars and pretend they're ordering from the Starbucks drive-thru, but it was adorable and I didn't have the heart to stop them).

Giving them these play breaks in between our formal learning helped them focus better. Suddenly, I felt like I understood why kids losing their recess time in school is such a big deal.

Am I A Tiger Mom At Heart?

Sure, I want my kids to grow up and be successful, but seeing as how I don't measure success in terms of salary or where your degree is from, I think I fail at being a tiger mom. I'm proud of my kids whenever they learn something new and I love to foster their curiosity and existing skills, but being a tiger mom felt more like being a drill sergeant rather than being a parent, and that type of style just didn't work well for me.

Being a tiger mom may be a way to give your kids a leg up on other kids in school, but for me, the risk of my kids resenting school or sports instead of enjoying them isn't worth seeing them make honor roll. I want them to do well, but on their own terms. Is being a cat mom instead of a tiger mom a thing? Because if it is, count me in.