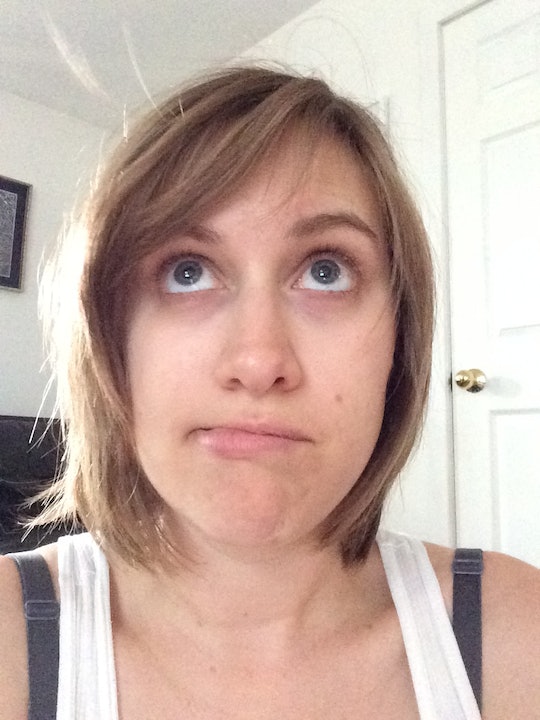 A few years ago, I got a pixie cut. I think pixie cuts are something every woman should try once in her life. Honest to goodness, I've never felt more beautiful, it was easy to care for, and pixie cuts go with all the outfits; they're just the right balance of edgy and chic. The one and only thing I didn't — and still don't — like about my pixie cut is growing it out. The process feels like it has taken forever and I've never had so many awkward haircuts. There is only so much even the most talented stylist can do with mullet/mushroom-cut hair.

For the last couple of months, I'd been feeling pretty down about the state of my hair. It didn't look good to me and it didn't make me feel very good. But then I heard that coconut oil can help hair growth. Coconut oil is pretty much a miracle elixir handed down to us from the gods. So far, coconut oil has been successfully used as a shaving cream, to whiten teeth, it's great for cooking, and, of course, does wonders for dry skin. But when I heard about coconut oil's benefits for hair, I had to try it for myself.

If applied regularly, coconut oil will promote hair growth by strengthening hair proteins, moisturizing, and providing nutrients to the hair and scalp. Massaging it into the scalp will increase blood circulation which, again, promotes growth. And it contains antibacterial and anti-fungal properties, according to New Health Guide, which create an optimal environment for growing hair. The idea behind using coconut oil to help hair growth is to apply it as a leave-in conditioner once a week, but for the purposes of this experiment I decided to go balls to the wall and apply a coconut leave-in treatment every day for a whole month.

I used an organic coconut oil that I already had in pantry since we already use it at home for cooking and baking. The first thing I had to do was melt my oil as coconut oil generally stays in solid state in the jar. Everything that I've read about coconut oil emphasized this one thing: Do not use the microwave to melt the coconut oil as it will alter the chemical makeup of the oil. So, I scooped the coconut oil into a small metal bowl and placed that into a larger metal bowl filled with hot water. Once melted, I rubbed the oil into my wet hair and scalp, massaging it for a few minutes. Depending on what I had on my agenda the next day, some days I slept with the oil in my hair and on others, I rinsed it after an hour or so.

My first day, I used two tablespoons worth of solid coconut oil based on the expertise of Internet. Supposedly, "a good rule of thumb is to use two tablespoons for shoulder length hair." My hair is about shoulder length so two tablespoons worth of coconut oil went onto my head. This was way too much. I washed my hair five times the next day, as I left it in overnight, and I still looked like a total greaseball. For the rest of the experiment, I took however much I thought I was going to need and then I halved that.

I obviously didn't see any difference in my hair growth — length or thickness — in the first week. But I didn't expect to. Coconut oil might be a miracle elixir handed down to us from the gods, but it's not that good.

There aren't many steps in the coconut oil leave-in conditioner process, but even the few steps there are started to feel like too much by week two. I'm a mom and a wife, a student and a writer. So, when I have free time at the end of my day after the baby is in bed and dinner is served, I want to be spending it watching Netflix on the couch with my partner, not in the kitchen with my head in the sink while I spray water everywhere and avoid the gross stuff in the bottom of the drain that I'm too scared to pick out.

Once I got over this very small inconvenience, however, I started to notice some great changes in my hair. For instance, when my partner and I enjoyed a relaxing and much needed day at the local Nordik spa, I was expecting my hair to feel and show the effects of eight hours' worth of getting in and out of hot tubs, cold pools, and dry and steam saunas. But when I got home my hair looked... fan-f*cking-tastic, to be perfectly honest. It dried straight and soft. No frizziness, no dryness, no dullness. So, all those times when I had to interrupt Donna Paulsen being particularly amazing ended up being pretty worth it.

By week three, I was starting to feel a little disappointed. I'd come into this experiment with illusions of grandeur a la Khloe Kardashian's hair. And I wasn't sure that the coconut oil was delivering on its promise. But my partner did go out of his way to tell me that my hair was looking "really healthy." I mention this only because this is not something that he would normally tell me. This is not to say that he doesn't compliment my hair, he just usually does it after I've had a haircut or when my hair is looking particularly amazing before a special event. And even then, he really doesn't extend himself much beyond, "I like your hair." So, the fact that he noticed that my hair was looking healthy and that he verbalized it, well, that was a pretty A-1 day.

I'm not going to lie, I was pretty ready for this to be over by the end of the month. Between the tedious process of putting the oil in my hair, making sure that I got all of it rinsed out that night or the next day, dealing with oily pillowcases and towels, and the crazy bedhead sleeping in a coconut oil hair mask gave me, the cons seemed to greatly outweigh the pros on my little hair-growth mission. Even though my hair was soft, shiny, seemed longer, and air-dried like a dream, after four weeks it just stopped feeling worth it anymore.

When I started this experiment, I wanted long hair, hair that I can sit on, hair that I can use to repel down the exterior wall of a castle tower like a badass Rapunzel. Needless to say, these expectations were totally unrealistic and the only one using my hair for climbing equipment is going to be one of the unfortunate children from Honey, I Shrunk The Kids. But, this experiment did not totally drop the ball on its promises. First and foremost, my hair looks and feels amazing. It's super soft and has great volume — which is surprising, considering I've been putting oil in it for the past month. But most importantly, it looks longer and feels thicker! Though, that may just be its natural growth and have absolutely nothing to do with the coconut oil. And, OK, I'm not going to be looking like my hair idol Khloe Kardashian anytime soon but it's progress, so color me pleased. Plus, I've never had a reason to take so many selfies in my life so now I've gotten pretty OK at those, as well.

I embarked on this month-long mission because I was super frustrated with how my hair looked as I grew out my pixie cut. But once I actually started focusing so much on my hair, I realized how very unimportant it was. I still consider coconut oil a miracle elixir — it tastes great in my lactation cookie recipe and it adds a great layer of flavor to a black bean taco. It has some awesome benefits for hair, not only growth but overall health and I would definitely recommend it to anyone looking to improve their overall hair quality. But, like, don't let it cut into your Netflix time. Nothing is worth that.