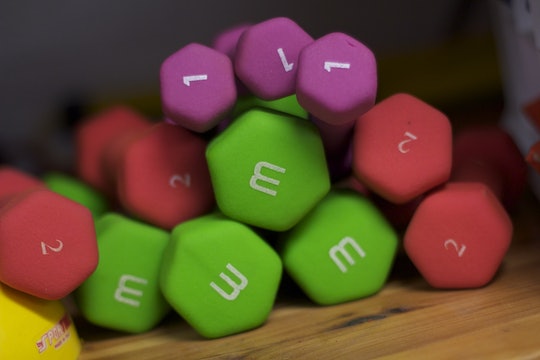 I Tried Working Out Daily To Boost My Energy, & These Were The Results

New-parent exhaustion is one of those things every been-there-done-that parent knows about but doesn’t really talk about. Sure, you get the “sleep while you can!” warnings throughout your pregnancy, but the truth of the matter is no matter how many ominous hints you get that “you will be tired,” and to “sleep when the baby sleeps,” it’s all bull until it’s the reality you’re faced with. I've known tons of friends with kids who tout the benefits of added energy for baby from working out, and with it being the new year and all, I wondered if a little extra boost would give me the oomph I needed to make it through my days with an energetic tiny human in tow.

As our daughter gets older and moves toward sleeping through the night (known in my house as the elusive Golden Snitch my partner and I have been chasing for months), the exhaustion has changed. I was once tired from going nights without a hint of sleep, but these days I'm exhausted from continuously dancing, singing, holding, carrying, bouncing, transporting, wrestling, pushing along, wiping, and desperately trying to entertain my MUCH livelier child, who only likes any given activity for five minutes.

To be honest, I’m having trouble keeping up. I really liked the idea of building in some time to sweat it out in the hopes of boosting my energy levels. Obviously working out has its physical benefits, but I was definitely interested in how I'd feel mentally and emotionally from a little daily sweat session.

I’m desperate for some Me Time, like so many other young women with kids are. So I decided that instead of my usual drinking wine in the shower time, I’d try to workout daily for one week and see if the endorphins and activity level would help me get through the next seven days feeling less tired. I want to be able to keep up with my very active little girl, not be haunted by the thought of playing Hide & Go Seek for the 12 time in one day.

Working out would give me both the alone time I so desperately crave and I’d also be doing something healthy for myself. I already had a decent workout regimen going but had never done a seven-day superset like this since having the baby. I was excited. Well, kind of.

Here’s how it went.

Twenty-minute catnap? Necessary. Today’s workout was a 6 p.m. Pure Barre class. Truthfully, right before I was about to leave for class, I considered not going since I was slightly on the edge of a nervous breakdown from how gruesome the end of the day was (my days tend to gradually spiral downward as the hours tick closer to baby bedtime). I realized, however, that if I stayed home I’d only continue to obsess over the baby and would not really get the break I desperately desired. So, off I went!

The car ride itself was bliss (spoiler alert: there was silence!). I even got a huge burst of energy once I got to the studio, saw some familiar faces, and chatted with friends. Seeing other adults from my old, pre-baby life helped me feel like a normal human being again. Class was great, and it was so nice to do something that was solely just for me. Even though I knew class only lasted for a set amount of time, I didn't feel the pressure to rush through every move so that I could focus on something else or prep a bottle or pick up toys or make sure my kid was occupied.

OK, full disclosure: I haven’t showered in two days. I’m contributing this to the fact that my wake-up call this particular day was 5:30 a.m. (a fan favorite around here) and not due to lack of sleep. I knew my workout would be at home today since I was not signed up for a class, and I was already stressing out over making time. I find working out at home these days to be even more difficult, and the fact that I could just easily sit on the couch, queue up Netflix, and pour myself a glass of wine was already sounding way too tempting.

It took me all day to finally get motivated, and I decided on the quick, 25-minute torture chamber that is Shaun T’s Focus T25 “Rip’d Circuit.” The workout was definitely energizing, even though I admit I ended up doing T23 instead of T25 because I skipped two minutes of the exercises — one-legged burpees? Come on. Not today, Shaun.

I felt great afterwards, but still closed my eyes for 20 minutes after my husband got home and took over baby-wrangling for a bit.

Exhaustion Level: Still 8 Out Of 10

Due to some funky baby sleep, Mom and Dad were both completely drained after waking and could barely pass for functioning human beings for most of the morning. I was able to hypnotize myself into getting through 20 minutes on the elliptical and lifting some weights towards the later afternoon, but heart wasn't in it — and there's no telling where my mind was. I'd been hoping that day three would mark a turn in this experiment. I was hoping that I'd start to feel the extra oomph I'd been hoping for. Turns out it was still as elusive as ever, and my patience was beginning to wear thin.

Today was also the day I started to notice a problem: If I waited too long to workout, I was so exhausted by the end of the day that mere idea of doing anything physical became more of a chore than the special me time I wanted it to be. That said, waking up even earlier to squeeze an hour for myself in felt totally impossible. But I was games to give it a try. For the rest of the week, I vowed to exercise earlier in the day and see how that affected my overall level of functioning.

Ummm, guys. I was feeling good this day!!! Was this due to the fact my experiment was starting to work? Or because I went to bed at 9 p.m.? Who’s to say! My new, earlier workout plan was off and running and I was signed up for a 9:45 a.m. Barre class.

Since Barre is something I’m usually pumped to go to, my 5 a.m. baby alarm clock barely phased me. I pushed through my morning fueled by coffee, the dream of long, lean muscles, and the highly coveted me time. I got through the first half of the day feeling pretty energized, but crashed mid-afternoon.

I started to get a little nervous that my experiment was becoming a baby-poop-filled failure.

The baby slept in (6:30 a.m. is sleeping in around these parts) so I got a little extra morning rest. Today’s workout was at 6 p.m. Barre class that I had all day to (hopefully) stay awake for.

Naturally, my “workout earlier in the day” plan had already gone to pieces, but I don’t have a babysitter, so let me live, OK? I dragged myself to class, contemplating every excuse not to go during the whole car ride over. It ended up being one of the hardest classes I had taken in a while, making me feel like a weak sack of potatoes and Superwoman all at the same time.

Waking up during the 5-a.m. hour most days is an experience I’ve had to come to terms with via my own personal Seven Stages of Grief: shock and denial (no, no, no, it’s not 5 a.m.!), pain and guilt (she’s crying and it’s MY FAULT), anger and bargaining (I WILL FEED YOU IF YOU KEEP SLEEPING!), sadness (what has my life come to?!), the upward turn (hey, waking up early is a good thing, right? It gets your day going!), working through (Aw, I forget each day just how adorable she is), and acceptance (I’m awake now. This is my life. I’m making this happen). I powered through most of the day and squeezed in a quick elliptical session and lifted some of my husband’s weights (they make me feel way stronger than I actually am).

The day ended with me, unable to keep my eyes open past 8:30 p.m. (pathetic, but who cares? I did something!). On day six I let the frustration I'd been feeling so far during this week sink in: It'd been six days and I didn't feel any different. I was proud of myself when I made the time to do something just for me, but I didn't feel more energized or like I had that extra boost I'd been searching for at the start. Instead, I just felt the same.

I began to wonder why I was forcing myself to do this. I loved having time for something for myself, and I was already wondering how else I could spend this hour. Maybe I could pick up a new hobby or take a walk, or soak in the tub or read a book. Maybe it wasn't so much the exercise boost I was in desperate search of — maybe it was just the time to do something for myself.

The last day of my experiment was upon me, and I was sadly feeling discouraged. Even with all my efforts to workout, I was still tired and it was still a struggle to make the at-home workout happen. I did about 15 minutes of yoga and stretching and lifted some weights to top off this week.

All throughout this week I realized that I'd been fighting the guilt of squeezing in a workout here or there, but on day seven I was proud of myself for even finding the time to make something happen, even if it was only 15 minutes worth of something. The sheer fact that I got up, put on a sports bra, and made every effort to do something for my mental, physical, and emotional health was a feat I should be proud of. So on day seven, instead of being disappointed that this experiment hadn't gone the way I'd planned, I decided to be proud. Working out is hard, and with a baby, it's even harder. I did what I could, and that was something to be proud of.

Did It Work? Was I An Endless Ball Of Energy?

Overall, I feel that my experiment was a bit of a failure. I felt just as tired most days as I would have if I had not exercised at all. This frustrated me because I was really hoping for some type of miracle energy boost as a result of my extra physical efforts.

Then I took a few minutes to reflect further and I realized something: I have a baby. Babies are the most inconsistent, unpredictable beings on the planet. To make it harder, they cannot tell you what they want! Each day is a big question mark — how long will she nap?, will she be cranky?, is she teething?, does her tummy hurt? — and so many things are very much out of our control. As a control freak, this is hard for me, and I’m sure it’s just as hard for other women to handle. Of course I am going to be exhausted every single day no matter how much caffeine I drink or how perfectly the day might go.

A positive outcome of this week, however, was that I made the extra effort to exercise, which inevitably lead me to feel good about myself physically. I felt leaner and stronger and in control. More importantly, though, was that I realized I could do something for myself and not feel guilty about it, or feel like my time was better spent at home with my kid.

Reinforcing this, my husband and I now have an agreement: I can make my Barre classes happen a few times a week to keep me sane, strong, and happy.