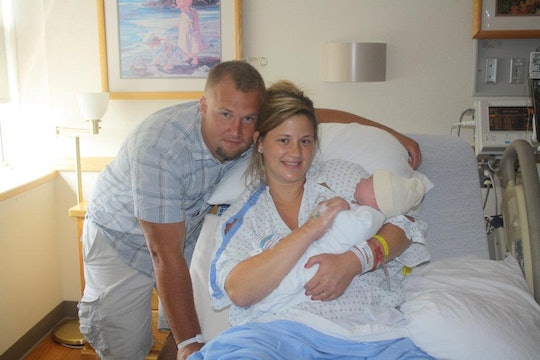 After two unmedicated births, I decided to spring for an medicated delivery with my third child (and first son), and quite frankly, getting an epidural after two unmedicated births was amazing. I had two very different birth experiences with my first two daughters. The first, I'll be honest, was not so delightful. I went in rather naive, knowing enough to know that you can never really "plan" birth exactly the way you want, but not realizing enough to know that some kind of planning is actually incredibly helpful. From the start, my first birth felt like a disaster. My water started leaking one week before my due date, but my contractions never started. I walked literally like, seven miles on dirt roads around my home trying to encourage labor, but nothing really happened.

Still, my midwife was concerned enough at how far away from the hospital I was located (almost two hours) and the risk of infection — I was Group B strep positive, which, according to American Pregnancy Association, is a kind of bacterial infection found in an expecting woman's vagina or rectum — so she told me to come in. I arrived to the hospital around midnight with a few sporadic contractions, but not full-blown labor. It went that way all through the night and into the next day when finally my midwife recommended we start Pitocin.

By that point, I was exhausted and miserable, having been awake for more than 36 hours straight (in retrospect, the seven-mile walk was a bad choice) and I was petrified of starting Pitocin. It was also about this time that I found out that my midwife didn't even offer epidurals, so that was an unpleasant surprise. At the time I was convinced starting Pitocin meant I'd "failed" and that labor would be too painful for me to handle. But after the Pitocin started, labor really did get too painful for me. I tried to actually climb out of bed and leave the hospital at one point, and when my daughter got stuck and crowned for two hours, I thought I would die from the pain. I ended up with an episiotomy, which really upset my midwife because she rarely did them and overall, I just felt traumatized by the whole experience. My sister and brother still talk to this day about walking by my room in the hospital, horrified by my screaming.

With my second baby, I didn't want a repeat incident and I poured all of my energy into preparing for a "do-over" labor. I wanted to have an unmedicated birth again, only this time I wanted one that was without all my screaming and trauma. In short, I wanted to do things right. And I prepped for birth like I was marathon training, practicing visualization and yoga religiously to learn how to breathe and focus. All of my efforts paid off when I was able to breathe my way through my labor almost silently, because that apparently worked better for me. My nurse even remarked that she'd never seen someone so calm in labor, which was definitely a big change from the first time around when I frightened the entire ward.

I just didn't have it in me to prepare for yet another birth without medical interventions, and to be honest, I was 100 percent OK with that.

By the time my third pregnancy rolled around, however, I was over having an unmedicated birth again. I knew I was capable of giving birth without the help of medical interventions (something that was important to me), I knew that doing so hurt like hell, and I knew that I had nothing to prove to myself anymore. And frankly, I was exhausted. My third baby was my first boy and he was huge. It was the hottest summer on record in something like 50 years and with a due date set for the first week of July, I was completely miserable. I was also working every shift I possibly could as an OB nurse to save up money for my "maternity leave." (As a part-time employee, I wasn't eligible for any type of paid leave, so I had to create my own.) Running 13 hours on your feet when you're nine months pregnant is not fun. I knew that in order to have this baby unmedicated, the way I'd done for his two sisters, I'd need have to be in the right mental state, and I just wasn't. I was tired, both physically and mentally, and I'd also switched provider in order to deliver at in the labor and delivery ward where I worked.

Not planning a third unmedicated birth felt a bit like I was throwing in the towel, but I was perfectly at peace with my decision. I just didn't have it in me to prepare for yet another birth without medical interventions, and to be honest, I was 100 percent OK with that.

As soon as that sweet, sweet medicine starting coursing through my epidural space, it was like a miracle. I immediately settled down comfortably into my pillows and smiled at my husband. I even cracked a joke.

When the big day finally rolled around — I went into labor after sprinting in desperation up and down some hills in the summer heat —my doctor let me do my thing and I hung out until I was dilated to around five centimeters and she broke my water to get things rolling for me. At that point, knowing the hard part of labor would kick in fast for me, I went for it and asked for my epidural. I felt a bit rebellious because I wasn't even feeling that out-of-control-kill-me-now pain yet.

By the time the anesthesiologist actually came in to administer the epidural, however, I was definitely feeling the pain. I even started to feel like I could push, because I was basically sitting up on my baby's head. But as soon as that sweet, sweet medicine starting coursing through my epidural space, it was like a miracle. I immediately settled down comfortably into my pillows and smiled at my husband. I even cracked a joke.

I loved having an epidural so much, in fact, that when I got pregnant with my fourth baby, there was no questioning it: I'd have the epidural again.

His jaw dropped to the floor. He'd seen me in labor twice and this relaxed, smiling person was not a sight he had seen before. He looked at me in complete disbelief and said,

Um, no offense, sweetie, but why the hell didn't you do this the first two times?

My epidural was absolutely wonderful. I still felt the pressure of my baby moving down and it's not like it was completely pain-free, but compared to giving birth sans medicine, it was sweet, sweet relief. My epidural worked so well, in fact, that my doctor finally came in and said, "This baby is not going to get any lower without you delivering. How about we just get this over with?" Two pushes later and he was out before I could say, "9 pounds, 2 ounces." From the start to finish, it only lasted a few hours.

I loved having an epidural so much, in fact, that when I got pregnant with my fourth baby, there was no questioning it: I'd have the epidural again. I knew my limits by then and knew that I'd want to labor unmedicated in the beginning and then get that little piece of heaven again. Looking back I feel completely content with my decision to get an epidural after two unmedicated deliveries. I feel like I knew exactly what I was in for and I really enjoyed the experience of labor with an epidural. I actually enjoyed the experience instead of screaming my head off pushing. I would even go so far as to say that my husband and I even had a bit of fun during my labors.

My epidural was a wonderful experience, and I'm so glad I did it. I'm glad I had both types of birthing experiences, actually, but if I ever find myself pregnant with baby number five, I'll tell you one thing: I'll probably ask for an epidural again.