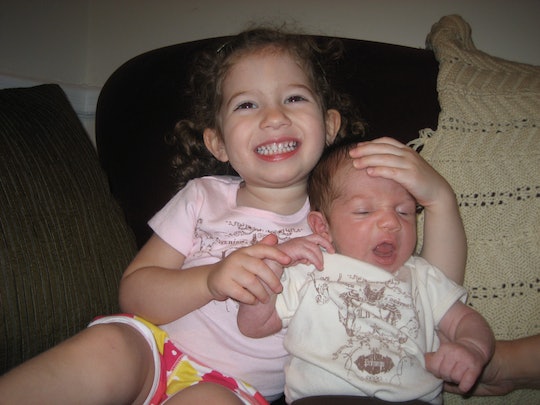 I was an honor roll student, subscribing to my school’s theory that if I worked hard and studied, I’d get good grades. And though I wasn’t being graded on life after college graduation, I liked performing at a high level as I advanced in my career. I prided myself on being a generous partner to my husband. And when my first child was born, I definitely studied and worked hard to make sure I was doing everything I could for my new little charge. But while I was a kickass mom of one, I have been a B-minus (at best) mom of two.

It really comes down to math; I am one person and if my energy and attention are required by two people (both of whom are writhing naked on the floor and fighting over who gets in the bath first), then I am 100-percent going to lose my sh*t and the night will end with screaming and crying and nobody getting clean.

Ok that’s not an exact formula, but you get the idea.

With one kid, I was living my best mom life. With two kids, I had to lower the bar if I didn’t want to feel like a constant failure.

Before my daughter was born, I had time to plan. I researched all the baby products I thought we’d need (and registered for far too much stuff we ended up not using). I laundered tiny onesies and arranged them carefully in her drawer. When she was born, I got us into a routine of feeding and sleeping and though I never felt fully rested or in control (why is she crying now?), I at least felt like I could be attentive to her every need when I was with her.

That feeling lasted for two years and eight months. Then her brother was born.

At that point, my daughter gave up her nap. Neither of us was ready but I could no longer spend almost an hour trying to get her down when I had a mewing infant in my arms after my husband’s 2-week paternity leave was up. I also got more lax about her screen time; one episode of Elmo’s World metastasized into three when I was caught in a cluster-feeding session with her baby brother.

My poor son; he deserved that same undivided attention I had showered upon his older sister when she was a baby. But I was multitasking while caring for him: reading to his sister while he nursed, getting him to nap in his carrier so I could spot my daughter on the playground’s climbing equipment, and passing out during his bedtime feeding because I had run out of steam by the end of the day to enjoy snuggling him before putting him down.

With one kid, I was living my best mom life. With two kids, I had to lower the bar if I didn’t want to feel like a constant failure. Did everyone get fed enough somewhat nutritious food today? Yes. Is everyone still alive? Yes. Those were my wins when I had two kids under 3.

As they’ve gotten older, I haven’t stopped striving for my A-plus in parenting, but I have learned to manage my expectations. I do that by acknowledging that all of the people in our house can’t be happy all of the time. In fact, one kid’s happiness if often contingent on the other one’s misery. If my son has a couple of playdates lined up, I become the world’s worst mother in my daughter’s eyes. If my 10-year-old daughter is granted a few extra minutes before bedtime to cheer her parents on as we play HQ Trivia, my 7-year-old son throws himself on his bed in tears. A-plus parenting would be when both kids go to sleep cooperatively and peacefully. So I’m a consistent B-minus in the bedtime department. And, well, most other departments.

I don’t always check everyone’s homework (nor do I think I should, given my kids’ ages and the fact that they know what’s expected of them when it comes to school). My son has been wearing a jacket that’s a little small on him because I didn’t realize he had grown (somehow this is a fact about children that I conveniently forget because I do not enjoy bleeding money on clothes that are worn for just a few months at a time). I pretend not to notice when my daughter is playing around on Music.ly after 8 p.m.., even though that’s the cut-off time for screens in our house, just because I don’t have the energy to deal with conflict after a long work day. I should be getting them to eat more than just one bite of a green thing at dinner, but it’s a fight I’m so sick of having.

Recently, I became much more OK with my B-minus status. I realized that the ROI (return on investment) of being an A-plus mom was not worth it. I would have to redirect so much energy back to my kids for their lives (and maybe my life) to be just a little bit better. My children are healthy, so why bother putting in significantly more effort to have them eat just a few more fruits and veggies during the week? They are better than B-minus students, so, even though I would love to see them really reach their potential, they are chugging along just fine, with time in their schedules for soccer and dance and random social activities. I don’t actively participate in the PTA, since I work full-time and try to also have a little social life, but I chaperone a class trip for each kid at least once a year, and write a fundraising check every September for their public school.

In some ways, I do the bare minimum, such as making sure they’re clean, hydrated, and dressed appropriately for the weather. Though I do fantasize about resuming my Kickass Mom status, back when I had one tiny child who just had to look cute to give the world the impression that I had my sh*t together, I don’t see the value in killing myself to achieve it.

Being a little lazy sometimes makes me feel better. And when I feel better, I’m a nicer person… to my husband, and my kids. Yes, I know my daughter needs a haircut. Yes, my son’s shirt is on backwards. I could be an A-plus mom if I cared about getting graded on stuff like that. I don’t.

More Like This
The Best Halloween Family Pajamas To Match Your Boos
I’m A Mom Who Will Never Own A Home
Home Reno Culture Makes Me Feel Like I Live In A "Before" House
I’m Getting Dual Citizenship For My Jewish Children, Just In Case.