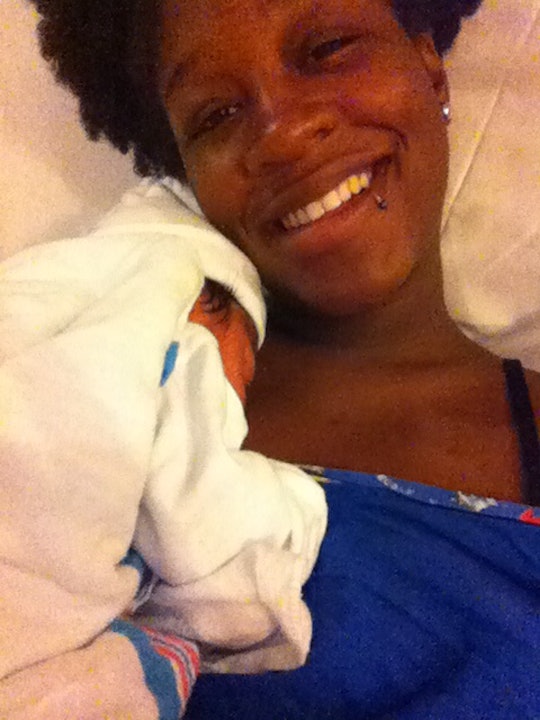 I Was Coerced Into Getting An Epidural & I Really Resent It

Near the end of the summer of 2012, I was beyond ready to go into labor. I’d read every baby book marketed to new, clueless moms and, by 39 weeks, I was begging my doctor to induce me. While pregnancy was as beautiful as I was promised it would be, I’d hit that wall of being totally over it like many other women experience. In one of the many, redundant baby-rearing books I'd read cover to cover, the author suggested I write out a detailed birth plan since this would be my first child and it was important that my wishes during my labor and delivery were clear. At the top of my list, I wanted to avoid getting an epidural at all costs. Though I'm not the type of woman who typically takes a side when it comes to controversial subjects like whether or not to get an epidural — I definitely believe to each their own — I’d decided long before I ever felt my first wave of labor pains that I didn't want an epidural because I wanted to trust my body to do what it was supposed to know how to do without an epidural. At the very least, I wanted to give my body the chance to do things on its own.

Around 10 p.m. on a Wednesday night in the middle of studying, I felt my first labor pain. It was like light menstrual cramp that was more annoying that it was painful. However, I'd gone through an entire 40 weeks without even a Braxton Hicks contraction, so I kind of just felt like pregnancy was just going to become an endless state of my being. But when I felt the first signs of labor that meant my baby was actually coming, I suited up for the hospital — fast. This was my first mistake. I hadn’t realized that, once admitted to the hospital, my control over the situation would diminish greatly. Once I'd checked in, I felt like my birthing plan was as valuable as a tissue after wiping my nose. I would've been better off using it to make origami.

Arriving at the hospital, my OB-GYN admitted me despite the fact I was only about 4 centimeters along. I told my triage nurse as soon as she asked me if I wanted an epidural that I was positive I didn't want the epidural. She rolled her eyes, laughed a very telling laugh (though I didn't realize it at the time), and offered me a light sedative to help me sleep through the night that wouldn't affect the baby. By the time the sun came up the next morning, my contractions were picking up in intensity and frequency. Every time the nurses asked if I wanted an epidural, I refused.

I realized that my epidural had pooled onto one side of my body and I felt full wrath of my labor pains on the other half. The Pitocin revved up my contractions to an unbearable intensity and, lying there in the hospital bed, all I could do was scream as loud as possible as the train of contractions ran through me.

Around 6 centimeters dilated, my doctors decided to intervene because my progression slowed down. The nurse, almost so insistently that it seemed like I didn’t have an option, administered Pitocin. Going in to labor, I wanted to go drug-free and avoid having an epidural. However, once the Pitocin began to rev up my labor, the contractions were unbearable. Each contraction hit me like a bus going 100 mph, and I felt like my choice to give birth by letting my body guide the way was taken from me prematurely. I felt cornered into getting an epidural after my doctor had given me Pitocin, and to be honest, it altered my birthing experience into exactly what I didn’t want it to be.

Less than 30 minutes after the Pitocin had been administered, all I was able to do as far as pain management goes was scream, beg, and cry for an epidural. By the time I'd gotten to full-blown screaming, the nurse offered the epidural again, and although I was in the delivery room with my nurse and my then-partner, I felt alone. My nurse and my partner acted like my desire to go through the process without pain medication was a defiant stand just to "prove" that I could do it, and when I finally caved in and asked for the epidural thanks to the unbelievable pain of Pitocin-ladened contractions, I felt defeated and unsupported.

For the first two hours after the epidural had been administered, I breathed a regretful sigh of relief. Sure, getting an epidural wasn’t part of my birth plan, but the pain of the Pitocin was gone and I finally felt like I could just hang out. Unfortunately, that would be my only relief. My nurse suggested I try to nap while I could, so I took her advice and rolled to my side to catch a few minutes of rest. But an hour or so later, I realized that my epidural had pooled onto one side of my body and I felt full wrath of my labor pains on the other half. The Pitocin revved up my contractions to an unbearable intensity and, lying there in the hospital bed, all I could do was scream as loud as possible as the train of contractions ran through me.

Lying in my bed, my legs numb from the last dose of my epidural, I felt like I'd been the one who'd been conquered. I didn't want the epidural and, sitting there alone, I felt like I'd already started messing up the whole motherhood thing.

Once my baby arrived healthy and crying, we enjoyed a brief moment of skin-to-skin time before he was quickly shuffled to the nursery where everyone followed. Lying in my bed, my legs numb from the last dose of my epidural, I felt like I'd been the one who'd been conquered. I didn't want the epidural and, sitting there alone, I felt like I'd already started messing up the whole motherhood thing.

Looking back, the one thing I'd absolutely change if I were pregnant again would be to take control over my birthing experience. I was understandably anxious about going into labor for the first time, but I transferred my power and right to choose what I wanted for myself and my baby to the nurses and doctor. I didn’t give my body a fighting chance to go through the birthing experience without feeling rushed, like I'd hoped. From the moment my labor began, I felt like I'd relinquished control over how it was going to progress. Because I’d never gone through the experience before I knew there were aspects of the birthing process I'd have to loosen my reins on, but things took a turn for the worst when I felt like I was ushered through the process with little to no voice of my own.

At the end of it all, my son was born and my body was intact, but if I ever had the opportunity to give birth again, I'd hold onto my desire and create a birthing experience that would come as close as possible to giving me the kind of delivery experience I wanted.