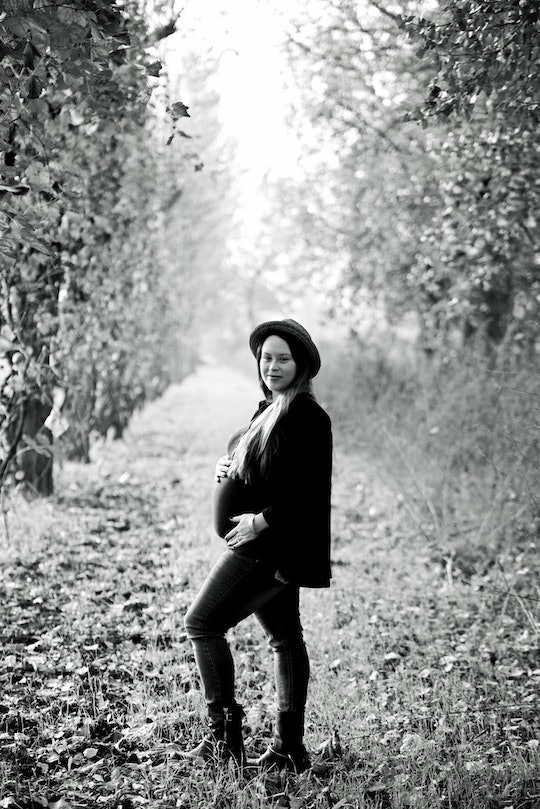 I have been shamed for a lot of things in my life: my acne, the fact that I wear glasses, for having curves, and for breastfeeding in public uncovered, just to name a few. The one thing I never thought I would be shamed for was being active and for taking care of my body. Then, it happened. I was fit-shamed during my pregnancy and it was absolutely infuriating. Let me give you some backstory: Once upon a time, I got pregnant with my first child at 190 pounds after having an extremely difficult time conceiving because I suffer from PCOS, and I was working and going to college full time. Once I finally did get pregnant, I was diagnosed with gestational diabetes and I spent my entire pregnancy monitoring what I ate and logging it. By the time I had my daughter, I weighed 205 pounds, only a 15-pound weight gain. With my second pregnancy, I wanted things to be different.

After I had my first-born daughter, I dropped the weight and then some, and eventually started to change my lifestyle habits after her first birthday because I had become a stay-at-home mom due to our lifestyle. I took charge of my health and fitness and by the time she was a little over 2, I'd dropped down to 167 pounds. I fought to lose every single one of those pounds by working out and changing the way I ate. It didn't come easy for me. So when I found out I was pregnant with my second, I became determined to continue taking care of my body throughout my pregnancy. Statistically, when you have gestational diabetes in your first pregnancy, you're more likely to have it again in your second, according to the American Diabetes Association, and I wanted to do everything in my power to break that cycle.

It eventually got back to me that someone (whose name I won't use), questioned if maybe I had an eating disorder since I seemed to care so much about what I was eating and that I was working out so much.

In my first trimester, I hit a stumbling block: I suffered from pre-natal depression. For the first 12 weeks of my pregnancy I was too depressed to even go to the gym or maintain any semblance of my routine. It was really rough on me, and even though I knew I'd feel better even if I had to make myself go, I couldn't bring myself to do it. But, then the tide shifted around the 13 week of my pregnancy and I started going to the gym again regularly and going on walks with friends. I don't know how I did it, but I somehow found a balance in both my "diet" and cravings while I was pregnant – which is crazy for me to even think about. (And when I say, I mean in terms of what I was eating.) I'd make the choice to eat healthier before I was pregnant and I was able to maintain that during the pregnancy, but I wasn't counting calories or denying myself anything I wanted when I wanted it.

Headed into my second trimester, my second pregnancy was going great. I didn't have gestational diabetes and I was so happy about that that I actually cried when the doctor called me to tell me the news. I was so proud of myself and felt such relief. I felt supported by my friends and fellow parents, but it eventually got back to me that someone (whose name I won't use), questioned if maybe I had an eating disorder since I seemed to care so much about what I was eating and that I was working out so much.

The shame of her judgment was hard to ignore. I mean, why would anyone ever look down on someone else for doing what felt right to them?

I'm not going to lie, I went home and cried when I learned that she asked my best friend if I was suffering from an eating disorder, all because I cared about what I put into my body during my pregnancy. I wondered if my so-called friend felt I was somehow jeopardizing my baby. I wondered what else she assumed she knew about me. Though we weren't close friends, we do have a ton of mutual friends, and I realized pretty quickly that she was things like that about me to them too.

Her judgment of me weighed heavily on my heart. How could she, for even a second, toss around words like "eating disorder" without wondering about the message that would send? How could she use those words so nonchalantly? But perhaps what stung most of all was the fact that in her own pregnancy, she'd done her best to stay fit as well. She even taught fitness classes well into her last trimester. Why had she earned the right to care for her body, and I hadn't?

I know in my heart that it was never about me, but words hurt, and so do assumptions. I was in the gym three days a week and ate a healthy balanced diet so that I could not only have a healthy pregnancy, but a strong one, because I planned on delivering my baby unmedicated,and I wanted to be in peak form to do so. The shame of her judgment was hard to ignore. I mean, why would anyone ever look down on someone else for doing what felt right to them?

Sometimes it feels like as mothers, we're shamed for everything these days. It's very much a damned if you do, damned if you don't situation. Even though I hated what she said about me, in a way it helped to thicken my skin. She also helped me give her a little grace, because her question made me wonder about the motives in her heart. I have no clue why, but maybe she said what she said because she wasn't in a good place after she had her baby or and she was unhappy with herself. Maybe it hurt her to see me in a good place. I'm not sure, and truthfully, I'll never know the motive behind what she said, but I do hope that whatever the reason was (if there even was one), she finds healing.

Depsite her words, I worked out right until the day I went into labor, and I thank God everyday I did so because I know without a doubt that I wouldn't have made it through 49 hours of labor without an epidural if I hadn't. I only gained 24 pounds, and I'm pretty sure some of it was the muscles in my legs from all of the squats I did. Working out during my pregnancy gave me the strength — physically, mentally, and emotionally — to endure a complicated labor and delivery and an even rougher postpartum period.

At eight days postpartum I'd lost all of the weight I'd gained during my pregnancy, and by two weeks postpartum I was able to start working out again. Though I would never suggest that what worked for me is what will work for someone else (or even that a "healthy pregnancy" is the only way to be), I know that the results of my journey speak for themselves. I know that her words can't touch me. And more than anything,I know what I chose for my body and for my baby is nothing, absolutely nothing to be ashamed of.