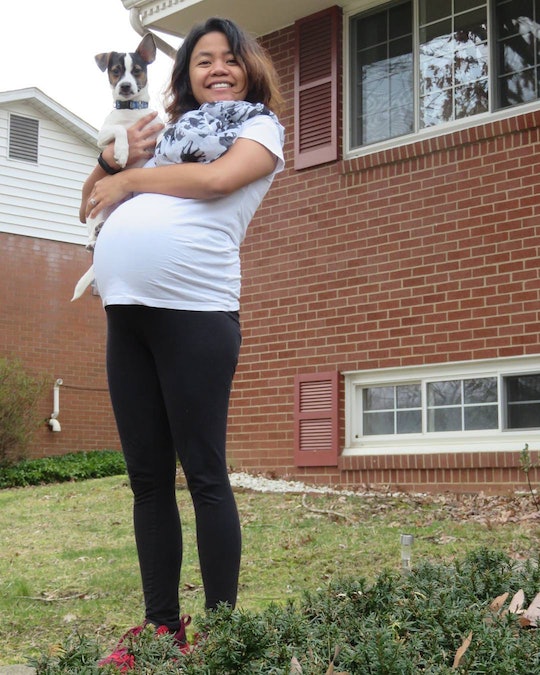 My Parents Shamed Me For Scheduling My C-Section

When I first got pregnant, the first image that popped into my mind was a scene I used to draw as a child of two mountains next to each other, with a sun peeking right in the middle. It was probably because it looked a lot like a woman giving birth vaginally. It made me smile. I filed that thought away as my official birth plan. Unfortunately, pregnancy can be an unpredictable thing. Midway through my pregnancy, I was diagnosed with gestational diabetes and was told to keep the option to have a c-section on the table. We waited until my 36th week ultrasound to verify my baby’s size, during which it was confirmed: I was having a whopper of a child who, at only 36 weeks old, already had the head and the belly size of a baby at 40-41 weeks old.

My husband and I told our parents about the news and how the size of our baby completely changed our plans. Instead of delivering vaginally without drug intervention with the guidance of a doula (we'd learned about doulas in Lamaze class and we thought it would be cool to get extra help on Birth Day), we had to seriously consider scheduling a c-section at 39 weeks.

My in-laws were mostly sympathetic that we weren’t going to have our Dream Delivery Scenario and assured me that everything was going to work out the way it’s meant to, and that my baby and I would come out of this experience both healthy and happy. My parents, on the other hand, were a lot more cynical, and it made me feel like crap.

My dad, who had learned about the news second-hand from my mom, called me on the phone. After the usual pleasantries, he uttered a disclaimer that still makes me cringe to this day: “I hope you don’t mind if I express my bias about you getting a c-section.”

“Wow! Despite your carefulness with your diet, the baby still got bigger? What happens now?” was the first reaction I got from my mom through Facebook chat. She then promptly logged off to run some errand. I was left stewing for a few hours, waiting for more.

I thought about the very detailed explanation we gave them (through email) of all our options, to assuage any worries on their part as well as ours. If I went into early labor, I could still try for a vaginal birth at that point, but gestational diabetes tacked on an added risk for shoulder dystocia, which meant the baby’s shoulders might be too wide and get stuck in the birth canal. It was an outcome that had pretty serious risks and would’ve probably ended up with emergency c-section anyway. We were also given the option to induce labor at 39 weeks, but again, depending on how much more the baby grew, the option had risks. All things considered, getting a scheduled c-section seemed liked the smartest, most practical, and safest option for both me and my baby.

My dad, who had learned about the news second-hand from my mom, called me on the phone. After the usual pleasantries, he uttered a disclaimer that still makes me cringe to this day: “I hope you don’t mind if I express my bias about you getting a c-section.”

Even though I knew my dad’s words came from a place of love and concern, it felt like a judgment of our decision-making skills as would-be parents. Instead of feeling support – which my mind knew came without saying – my heart felt heavy, helpless, and scared.

He proceeded to unload a boatload of opinions I think most people of his generation strongly believe about c-sections: It was nothing but "big business," an "expensive procedure pushed by scumbag doctors on patients," who were told they needed it even if they really didn’t. When I tried to explain that our situation was different and that my gestational diabetes diagnosis made things more complicated, he interrupted me to say that he thought my gestational diabetes was a made-up ailment designed to scare women into c-section deliveries.

I was too stunned to say anything more than a halfhearted, “OK, dad.” He tried to dull the pain I felt from his words by reminding me how much he loved me and that he just didn’t want me “cut up” and “hurt” by unnecessary surgery. With a quivering lip, I looked at my husband, who was standing within earshot and giving me a look that read don’t-say-anything-more-to-prolong-the-conversation. After I hung up, I just helplessly burst into tears.

My parents live in the Philippines and were unable to support me during my pregnancy in person, which is probably why they felt nervous for me and my scheduled c-section. However, I've always been a firm believer in the adage, "if you can't say anything nice, don't say anything at all," especially to a stressed-out pregnant lady who's not exactly sure what's happening inside her body. So even though I knew my dad’s words came from a place of love and concern, it felt like a judgment of our decision-making skills as would-be parents. Instead of feeling support – which my mind knew came without saying – my heart felt heavy, helpless, and scared.

One of the best things about my high-risk pregnancy was the fact that I had a partner who had my back. Sensing I needed to tap out, my husband told my parents the one thing I couldn’t: We were scheduling a c-section whether they liked it or not.

At the end of the day, we were going to favor my health as well as our child’s above all other considerations, whether they be about money, or satisfying other people’s concerns. We also didn’t come to a decision by blindly taking our doctor’s word for it – we did our own research and found studies that confirmed our decision to have a scheduled c-section to be the right one. My baby was projected to reach 4581g by week 39; by week 40, 4831g. At those weights, the risk for shoulder dystocia is high at 21.1 percent, according to a comprehensive paper compiled about the injury. If the baby got stuck, it would have to be safely but forcibly removed, which can often cause injury; in 5 percent of those cases, the baby is injured permanently (we’re talking brain damage, nerve damage, or other disfigurement) or dies. And as if that wasn’t bad enough, having gestational diabetes made the risk percentages three times higher.

Calling surgery “cutting me open” put a stigma on my scheduled c-section and had the opposite effect of compassion. It served nothing to feel bad about a tough choice that had to be made in order to make sure that our baby – their grandchild – ended up safe and healthy.

We also took care in choosing the doctor who would deliver our baby, as well as the facility I would give birth in. The hospital we chose had one of the lowest c-section rates in our state, and delivered over 11,000 babies a year. My doctor has personally delivered over 8,000 babies in his entire career, which is around 8,000 more babies than my immediate family’s grand total of zero, so his opinion is not worthless. Since it’s based on experience, observation, and study, we tend to trust it more than other opinions not based on those things.

Lastly, calling surgery “cutting me open” put a stigma on my scheduled c-section and had the opposite effect of compassion. It served nothing to feel bad about a tough choice that had to be made in order to make sure that our baby – their grandchild – ended up safe and healthy.

My husband covered all that and more in a respectfully worded email addressed to my parents. My mom – who was always more concerned about getting to the U.S. from the Philippines in time for my delivery over our chosen method of childbirth – thanked him for the information and ensured that no matter what, our baby would be born normal and in perfect health, with me going through the process smiling (and preferably, fully gestational diabetes-free after I delivered). My dad didn’t reply, because what response would ever beat a mic drop? I took the absence of a retort as a form of support, a way of conveying unconditional love and trust in our ability to make the best decision for our growing family. Nothing more needed to be said.

His letter – our Pregnancy Manifesto – gave me the emotional boost I needed to get out of my c-section shame spiral. Not being able to moan and groan through labor and squeeze out a plump human out of my vag didn’t make me less of a mom. In fact, the massive amount of physical, mental, and emotional preparation we did up until I gave birth made me feel pretty super. It certainly blew my mountains-and-sun drawing out of the water.

More Like This
41 Strong & Sweet Baby Boy Names That Start With “K”
Festive Mommy & Me Holiday Nail Ideas To Try
The “Tripledemic” Is Scary, But I Feel Less Helpless When I Wear A Mask
101 Advent Calendar Activities, From Books To Read To Cookies To Bake