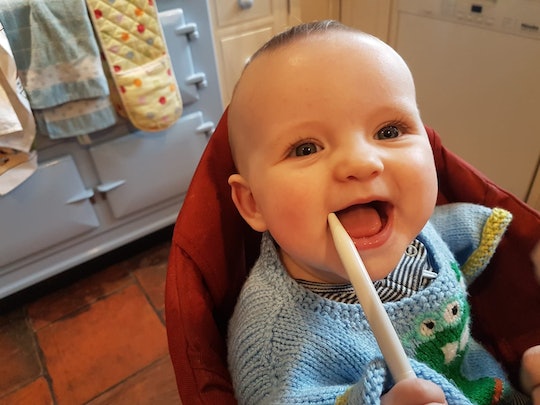 I Worried I Wouldn't Love My Second Child The Same As My First, Then Fell Harder Than Ever

There were times after the birth of my first daughter when I felt incapable of doing anything except look at her. Sometimes she'd be napping, or playing with a hard-cover book, or sitting in her fold-out ball pit with a big smile on her face. Minutes, if not hours, could go by. I was consumed by my feelings for her; consumed by the sheer wonderment of her existence. I was experiencing more love than I'd ever thought possible, which is led me to worry I wouldn't fall in love with my second child nearly as easily, or as fully, after learning I was expecting again.

Don't get me wrong: I wanted a second baby. I wanted a companion for my daughter. I liked the alliteration whenever I'd say "family of four." It felt comfortable and right for us, somehow. Through the first year of my eldest's life, however, there were times when I genuinely believed I couldn't possibly contain anymore love inside me. It was like I was already at bursting point. Like my heart was outside of my body. Like it had taken the form of this little girl. Like there was next to no room left for anything or anyone else.

Luna was 'just so special,' some would muse. 'There has never been a baby like her,' another might say.

In truth, from the moment I found out I was pregnant with my first-born (Luna), I knew that I adored her. As she started to sway and kick inside the womb, I understood that she would always be the most important thing in my life. My second pregnancy was different. This time, I was looking after a toddler in my day-to-day life. There wasn't any time to sit down in quiet contemplation, feeling my future baby twist within me. There wasn't any time to appreciate the changes in my body as a sign of what was to come. And, somewhere along the way, this all manifested as fear that I must not have enough love left for another baby.

Most of the voices around me only seemed to fuel my concerns. I am grateful that Luna had, and has, so many people in her life who loved her, but, like me, most of those people didn't believe they could ever love anyone as much as they loved Luna, either. Luna was "just so special," some would muse. "There has never been a baby like her," another might say. To our closest friends and family, she was (and remains) perfect. She is innately caring. Loving. Kind. Funny. Brilliant. Beautiful. Curious. Wild. How could another child ever compare?

You can spend all nine (give or take) months of pregnancy riddled by anxiety, by paranoia, by fear of the unknown, only for it all to become a distant memory upon looking at your child.

I would be lying if I said I didn't ask myself that very question. Luna had so quickly become my world, so although part of me longed for another child, part of me felt indescribably selfish for going through with the second pregnancy. I grew paranoid that I'd be doing this new child a disservice. That they would always feel second-best. That everyone, including myself, would always prefer Luna. That they deserved so much better than me, and what I was capable (or incapable) of giving.

But then, she arrived. Her journey out into this world was so vastly different to her sister's. Where Luna took two and a half days of agonizing labor to make it into my arms, Elia was with me after only four hours. I didn't have an epidural this time around, so I felt the intricacies of each one of her limbs escaping from my body. Not having had an epidural, I could also move. I could instantly reach for her, and I did.

You can spend all nine (give or take) months of pregnancy riddled by anxiety, by paranoia, by fear of the unknown, only for it all to become a distant memory upon looking at your child. For me, the moment I fell in love with Elia was actually the moment she was placed on my chest. She was only there for a brief minute or so before opening her mouth and trying to find my breast.

Nursing had been a major struggle with Luna. She was small and not particularly strong at birth, and she really struggled to latch. I spent months in despair, as did she. I cup fed and pumped and tried every nipple shield out there, until everything finally fell into place.

Elia latched right away, though. It was so fast, and so instinctual to her. As soon as she was on my body, being nourished from my body, I was inundated with the affection I'd been desperate to feel. She was a part of me, and I of her. We were cosmically linked. I realized that this bond had probably been there all along. I just needed to see her before grasping it fully. I needed to see her before I could understand that our hearts are fully capable of expanding more than we could ever dream as we introduce new, important, life-changing people to them.

I don't doubt that the same piercingly sharp surge of love would've come even if I hadn't nursed. It might've come simply from feeling her face nestled into my neck. Or seeing her eyes open in my direction for the first time. Or hearing her first cry. It might've come in the moment Elia met her big sister. As well as worrying that I wouldn't bond with my second child, I had been endlessly worried that Luna wouldn't bond with the baby: that she would resent her, or hurt her, or grow to hate my husband and I for no longer giving her our undivided attention.

It makes sense that my second pregnancy was so different to my first.

That first hospital encounter was out of this world, though. Luna saw Elia and beamed. She wanted to hold her, to kiss her, to crawl into the transparent hospital crib just to be by her side. Things haven't always been that romantic since, and Luna certainly does get frustrated, angry, and even violent with her baby sister. Still, that bond is always there. It never wavers for long.

When I look back on things seven months into being a mother of two, it makes sense that my second pregnancy was so different to my first. That my thoughts and feelings and perceptions were so different. When you already have a child, you arguably have a lot more to think about than you might've had the first time around. Your day is occupied by keeping a whole other person alive and well.

Raising a toddler was so consuming, in ways both good and bad, that I just couldn't appreciate my second pregnancy in the same ways. Unfortunately, as an anxious person at the best of times, this led me to believe I wouldn't love my new baby in the same ways, either.