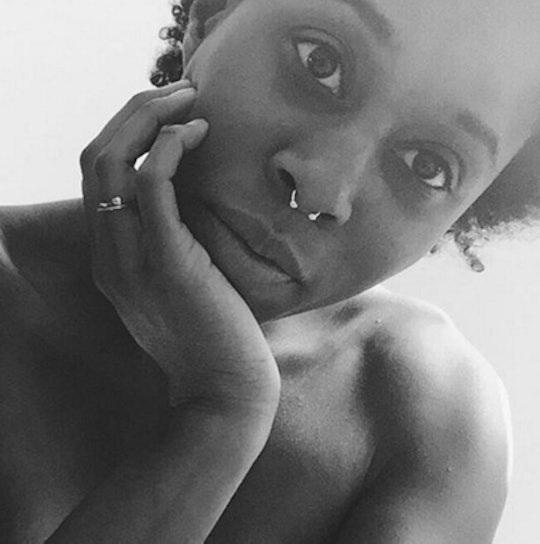 A few months ago, I published a story on Romper where I recorded all of racist things people said to me over a two-week period. I did it because I thought it'd be interesting to pay attention to my everyday actions, write them down, and then write about it. The "twist," if you can even call it that, was for me to repeat back to people what they'd said to me. Pretty early on in the experiment I noticed that people, namely white people, had a lot of questions about my natural hair. More than anything, they wanted to touch it and pet it. And because they'd asked to put their hands on my hair, I had to do the same to them. When I wrote up the piece after collecting the responses and my reactions, I realized that, through my writing, the pain, frustration, and emotion of the experience came out. Writing about it clarified for me what really going on when people asked to touch my hair. It was not just an invasion of my personal privacy; it made me feel like who I was and what my body looked like was a sideshow for people to enjoy. Writing the piece helped me dissect my feelings on the racism that surrounds me constantly as a black woman in America. And then the comments came rolling in.

One night shortly after the piece had been published, Bustle's My Favorite F Word Is Feminism Facebook page shared it, and someone tagged me in a comment. I skimmed the responses so far, then went to bed. It wasn't until I woke up that I realized how much the story had been shared. My Facebook inbox was full, my personal Instagram was blowing up, and my Twitter, which I rarely used, had so many notifications. I was in complete awe, not only that the story had reached people beyond my immediate community, but because people were taking time out of their lives to share their own stories with me.

I have been made to feel uncomfortable my whole life.

Not every response was positive, though. I remember one email, in particular, sent to me from a white woman (which she made very clear in the body of her email) that said she and her white friends were ready to "welcome me into their sisterhood" if I could just "be kinder" and "more patient" as I taught them. She let me know that people "loved touching her long blond hair," and she "always allowed it," and she instructed me to "know how to take a compliment." Here's the thing, though: As a woman of color with an afro, I don't get to give permission. That was the point at the heart of the story I'd written.

I responded by thanking her for her email, but I also let her know that as a black woman, it isn't my role or job to teach her. I won't sugarcoat or water down the realities of being black in America. I won't give anyone a gold star for saying that we are all equal. That idealistic sentiment isn't even remotely true. If it were, men wouldn't make more money than women, which, according to Glassdoor, is still widely the case in the tech industry. If we were all equal, black women wouldn't be told their natural hair is "unprofessional."

As soon as I started reading, I wanted to stop. I've never seen so much hate directed at one person before. I didn't know how to process being called a "c*nt" and a "self-hating" black woman.

I write about being a black woman and raising my children because being black in this country isn't always easy, or comfortable, or safe. I write about being black because I believe there is so much beauty and strength in my blackness. I write to remember that. I write to savor that. I want to face the conversation surrounding blackness head on. I used to shy away from conversations about race because of discomfort — not my own, but the people around me. I was raised to believe talking about race was rude and inappropriate. But now I realize we need these conversations just as much as before, and so I don't let discomfort stop me. I have been made to feel uncomfortable my whole life, so I hope that talking openly about my blackness will help someone else feel open and safe in theirs. I write to remind myself that I am not alone.

When it comes to my hair on my body, I am the authority.

A few days ago, the article was shared again, and someone tagged me, telling me to read the comments. Because the comments had been so positive the first time around, I figured there was no harm in reading them this time. But as soon as I started, I wanted to stop. I've never seen so much hate directed at one person before. I didn't know how to process being called a "c*nt" and a "self-hating" black woman. I responded to the comments, thanking these people for reading my story, making an effort to engage with them even though their words were hurtful. And in response, people accused me of taking my anger out on them.

A lot of white women commented, telling me, again, that I needed to learn how to take a compliment. Once again, what people failed to understand was that when it comes to my hair on my body, I am the authority. I have ownership of both of those things. They are mine. They belong to me. And as a black woman who is constantly overlooked and ignored, being told that I do not possess autonomy over the things on my person was not only devastating, it was infuriating.

It was clear from the responses reminding me to "not be so sensitive" that people didn't believe comments about my natural black hair qualified as racism. Instead, they wanted something harder, something angrier, something more profound. They wanted "real" racism, not what I'd given them.

I mentioned very briefly in the experiment that I didn't include all the things that happened to me throughout the two-week experiment. It is exhausting to catalogue every which way your body is taken advantage of. But the comments this time around also turned me on to an eye-opening truth: People expected me to have more tangible proof of the racist consumption of my body. It was clear from the responses reminding me to "not be so sensitive" that people didn't believe comments about my natural black hair qualified as racism. Instead, they wanted something harder, something angrier, something more profound. They wanted "real" racism, not what I'd given them, because they couldn't believe a black woman could be upset or angry about people "complimenting" her hair.

In my original essay, I didn't include the story about the white man who touched me while I was out one night and whispered in my ear that he wanted to "f*ck me" because he'd heard "black girls liked that." I didn't include that this man also mentioned his white wife back at home. I didn't mention the person in the mall who had a one-sided conversation with my children right in front of me about how "lucky" they were to have light skin, not dark skin like their mom. I didn't mention the night my best friend and I were at a bar and the bartender stood there, looking us in the eye as he simultaneously ignored us, and then had the gall to ask us why "you guys" always get so angry and worked up. I left those stories out of my original piece because to write them down after living through the pain of each moment left me with little hope. Those moments are so much heavier than my hair. But they cut just as deeply.

Despite the comments, I'm still proud of the conversations my piece has started. That's really all I wanted, anyway. I'm learning that for every person who wants to disagree or be upset about my experience, there is someone else who's read it and felt grateful and happy that they're not alone in their experience. Though I cried so much because I felt like I didn't do a good enough job explaining my experiment in a way everyone could understand and let everyone down, I was reminded by many beautiful emails that what I wrote did matter. I was reminded that I don't need to apologize. So I won't.