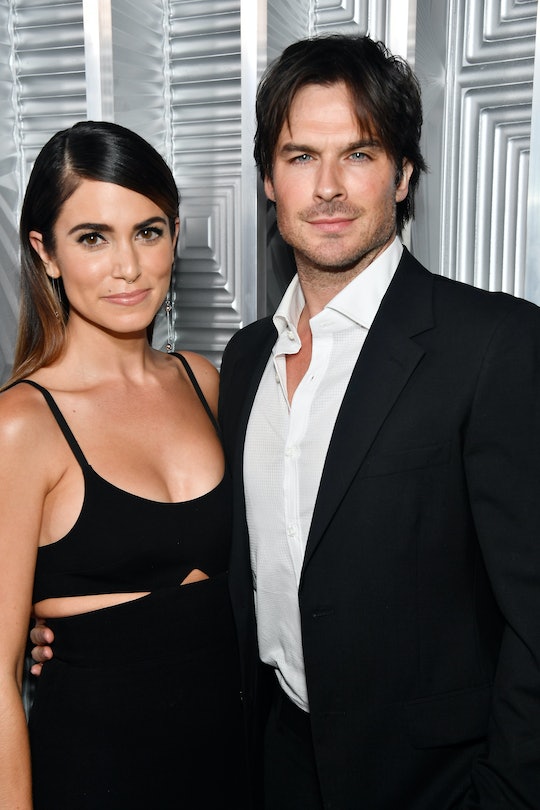 The Golden Globes on Sunday night was chock full of gems and countless memorable moments. In fact, I might argue that it was one of the best award shows in recent memory, and it seems like people will continue talking about it throughout the next few weeks. And as for one of those hot topics people can't stop tweeting about, it involves Ian Somerhalder and Nikki Reed's breast pump. Yep, Ian Somerhalder carried around Nikki Reed's beast pump at the Golden Globes and it's as amazing as it sounds.

One thing that isn't as often discussed during award show season is nursing celebrity parents. Sure, it's fun to talk about fancy outfits and what not as a distraction, but I think there could be more done to bring attention to the plight of a breastfeeding celeb during a long award show like the Globes. Do these parents plan their bathroom breaks (I see you, Chelsea Peretti) beforehand? Are they worried about adjusting their outfits (which is probably complicated, because high fashion is rarely simple) during said bathroom break? And most importantly, who holds the breast pump? An assistant?

Well, in the case of Reed, the answer to this question is her husband of almost three years, Somerhalder.

At some point during the show, Reed added a photo to her Instagram story of Somerhalder holding her breast pump in a "to go box." Yes, a to-go box. The box sort of reminds me of those containers that you might see at a fancy salad bar or something.

As for the snap's amazing caption, Reed wrote, according to the Daily Mail: "Takes a real man to carry your breast pump in a 'to go' box all night."

Yeah, this photo is pretty great. From Somerhalder's smirk to the breast pump neatly stored in the to-go box, the pic is pure gold.

And it sounds like fans on Twitter agree with me. One fan wrote: "Ian Somerhalder carried his wife's breast pump in a to go box all night at the Golden Globes, he's a real one." Someone else chimed in: "Truly husband goals."

Anyone who is a fan of Somerhalder, however, probably isn't surprised that he took responsibility for the pump during the show. Somerhalder is clearly a very hands on and dedicated dad to the couple's 5-month-old daughter, Bodhi Soleil Reed Somerhalder, after all.

In fact, just a month after Bodhi was born, Somerhalder talked about how fostering kittens prepared him to take care of a child, including all the nitty gritty parts that dads supposedly don't deal with. He explained, according to People:

To get up in the middle of the night to bottle feed eight kittens that would die without you, it gives you a sense of what it’s like to care for something that depends on you for its survival. It’s a very special thing. It’s a great beginner’s course ... I’ve learned to smile through cleaning endless amounts of poop and pee.

Not to mention, Somerhalder is a proud feminist who doesn't subscribe to sexist parenting stereotypes and the idea that women should be reduced to one role, for instance. Somerhalder said, according to Global Citizen:

Women can be wives, mothers, comedians, bioengineers, hackers, auto mechanics… the pressure should not be on fitting stereotypes and norms, but instead the pressure should be on launching yourself toward your true passions during the short time we have on this planet.

And it goes without saying that Reed's photo represents much more than a sweet moment between two parents. Somerhalder carrying Reed's pump around at the Globes proves that he takes his role as a parent and a partner very seriously, which is something definitely worth celebrating.