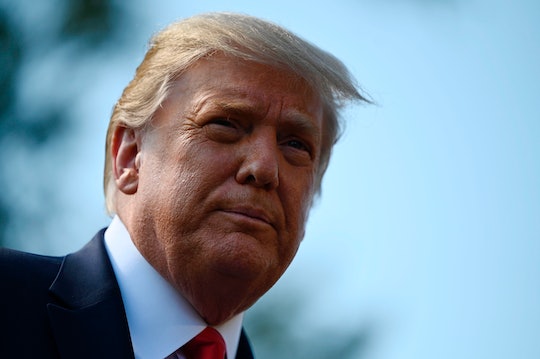 If Our Kids Can Go To Kindergarten On Zoom, Trump Can Do A Virtual Debate

For the better part of 2020, kids across the country have had to adjust to a very different and tough reality. Instead of going to school with their friends and teachers, even the youngest students have had to learn virtually. So if our kids can go to kindergarten on Zoom, then surely President Donald Trump can manage a virtual debate. Any suggestion otherwise is a slap in the face to every family who has been forced to figure out a way to juggle distance learning and working remotely during this ongoing global pandemic.

For months, children have been learning virtually to stay safe during the COVID-19 health crisis. Even kindergartners, who are not known for their attention spans and don't tend to be fans of sitting still at great length. Yet, they've been managing. With lots of help from teachers, parents, and caregivers, of course. But ultimately kindergartners and children of all ages are the ones who have to sit down and do the work. It's a shame their can-do attitudes in the face of the pandemic, their ability to roll with change and adapt, has not rubbed off on the Commander-in-Chief.

On Tuesday, the Commission on Presidential Debates announced that the second debate between Trump and his Democratic opponent former Vice President Joe Biden would happen virtually to "protect the health and safety of all involved" after the 74-year-old president and First Lady Melania Trump tested positive for COVID-19 last week along with several senior staff members at the White House. Trump was only released from Walter Reed National Military Medical Center on Monday.

After the call was made, however, President Trump told Fox Business in an interview on Thursday that he would not take part in a virtual debate as he didn't want to "waste his time" and said he didn't believe that's what "debating is all about."

"You sit behind a computer and do a debate, it's ridiculous," Trump told Fox Business. "And then they cut you off whenever they want."

Anyone who watched Trump's first debate with Biden in September is undoubtedly well aware that the president likes to be the one to cut people off when they're speaking, not the other way around. So, of course, many people pointed out that Trump's refusal to take part in a virtual debate is a bit foolish considering the fact that small children have managed to figure out Zoom school.

"Our kids have to endure hundreds of hours of remote schooling because of Trump’s incompetence, but he has a temper tantrum about one virtual debate," one parent tweeted.

"Trump attacking a virtual debate format, refusing to participate and instead threatening to do another rally is not only reckless, it’s an attack on everyone who’s continued their lives at work or school using remote technology to stay safe," another wrote.

The second presidential debate on Oct. 15 was intended to be in a Town Hall format, with both candidates answering questions from the American people. Biden's deputy campaign manager Kate Bedingfield said in a statement to NPR that he will still take part in the debate. "Vice President Biden looks forward to speaking directly to the American people and comparing his plan for bringing the country together and building back better with Donald Trump's failed leadership on the coronavirus that has thrown the strong economy he inherited into the worst downturn since the Great Depression."

Biden himself pointed out, according to NPR, that the president "changes his mind every second." Just like a kindergartner. Perhaps someone has a 5-year-old who can sit the president down and explain virtual meetings to him. As well as manners and adapting to change.