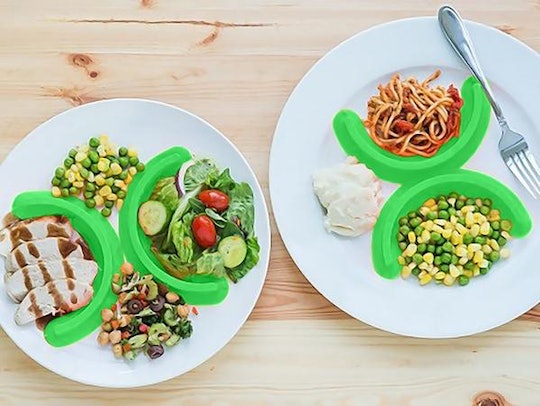 If Your Kid's 'Picky Eating' Is Brumotactillophobia, This 'Food Cubby' Can Help

Perhaps, before you had kids, you harbored lofty goals of raising enthusiastic little foodies. They would approach mealtime with open mouths *and* open minds. You'd never need to order off the children's menu or hide vegetables in muffins or, god forbid, drive yourself crazy keeping their peas and mashed potatoes separate from each other. Fast forward to now, when the food can't touch on your kid's plate without causing a complete meltdown: You've made peace with the fact that your kid is a picky eater, but can you at least get through dinner without it turning into a disaster because a chicken nugget touched a tater tot? Thanks to a clever gadget called the Food Cubby, maybe you can.

First of all, it's worth noting that if your kid does insist on rigid compartmentalization of his meals, you're not alone. As the National Post reported, "younger children often complain about separate foods on a plate touching each other," and there's actually a name for this particular phobia: brumotactillophobia. But... why? Well, experts think it could be a control issue, which certainly makes sense (little ones can't control much, but they can control what they put in their mouths, ultimately). But a 2018 study from the University of Copenhagen found not only that "children have distinct plating preferences that vary by both age and gender," but that these preferences could have more to do with aesthetics than anything else.

“One suggestion could be that they believe that the different ingredients could contaminate each other. But it could also be that they prefer to eat the different elements in a certain order or that the clear delineation just provides a better overview,” University of Copenhagen associate professor Annemarie Olsen told the NP.

Whatever the genesis of your kid's aversion to the concept of casseroles, the Food Cubby ($15 for two, Amazon) should make the process of eating several different foods from one plate significantly less stressful. The cubby itself is just a "semi-circle of BPA-Free, food grade silicone that suctions to a flat dinner plate," as a press release explained it — but once the cubby is suctioned to the plate, it creates a "wall" that both separates the food (even sauces!) and makes it easier for novice utensil users to scoop up spoonfuls.

This little girl is definitely having a blast with her Food Cubby:

"Just because everything we eat ends up in the same place doesn't mean it has to start out that way." I mean, fair enough. Nobody wants gravy on their grapes, as demonstrated so...visually in this clip. And it's good to know that the Food Cubby is dishwasher safe (phew!) and easy to use on-the-go. Just imagine the restaurant freak-outs that could be avoided with the Food Cubby! Of course, you might get a few looks from your fellow diners, but probably fewer looks than you would if your kid started screaming about gravy on his grapes.

Cute, right? The Food Cubby is also reasonably priced at $15 for two, and you can order it either on Amazon or the Food Cubby website.

Finally, it's important to remember that while there are definitely adults out there with brumotactillophobia (at which point it's believed to be a mild form of obsessive compulsive disorder, according to Spoon University), research has shown that the vast majority of kids labeled as picky eaters eventually grow out of their fussiness. And contrary to what you might fear, they do that growing at a normal rate (over two thirds of picky eaters are never even underweight, the Huffington Post UK reported).

So do what you have to do: Try the Food Cubby, use a dozen different plates for every meal, serve one food at a time... but don't stress. This too shall pass, probably.