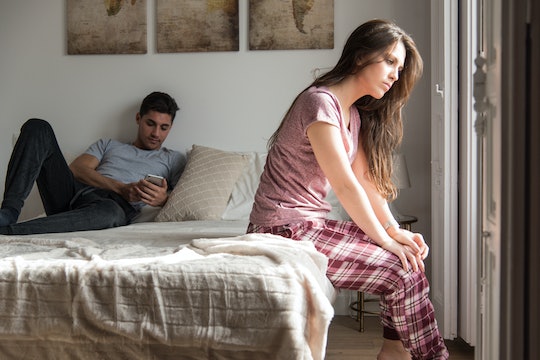 If You've Wondered These 7 Things More Than Once, Your Partner Isn't The One

No one's happy all the time. You get upset when things don't go your way at work, when you have a fight with a friend, or you and your partner don't seem to be on the same page. That's normal. Still, even when you're livid with your partner, furious about something that happened, the most mad at them you've ever been, if they're really the one with whom you're meant to be, you know that, deep down. You don't wonder. If you've ever wondered these things more than once, your partner isn't the one, however. And even if you love them and even if it seems as though the two of you were meant to be in so many ways, ultimately, it just might not be right.

It's difficult to think about the things that might indicate that your relationship isn't meant to be, after all, and that it might, in fact, be wrong for you. Breaking up can be extremely difficult, whether you've been together for a short time or the two of you have built an entire life together. But if you know sooner rather than later that the relationship isn't right for you after all, you might be able to save you both some pain later on. Reaching out to a therapist if you're concerned, struggling, or unsure about if your relationship is right can help you sort things out and figure out how to get yourself out safely (if need be). If you're wondering about these sorts of things though, they're red flags that your partner might not actually be the right person for you, so you likely shouldn't ignore them.