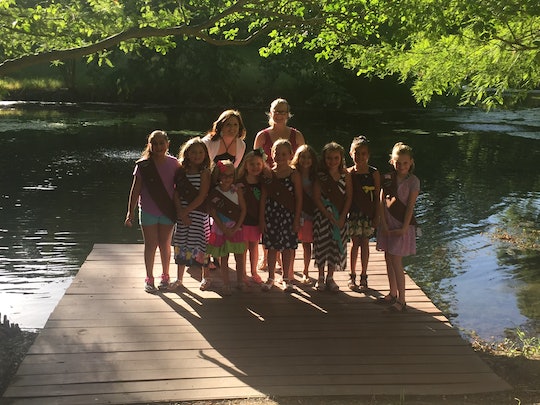 It’s the 100-year anniversary of the Girl Scout cookie, but recently the girls made the news for more than their Thin Mints. After news broke that the Girl Scouts would be participating in the presidential inauguration parade, the internet quickly took the organization to task for what they felt was the absolute worst message marching in the Inaugural Parade sent to young women and girls all over the country. Those on Twitter and elsewhere felt that the misogynistic remarks and actions of President-elect Trump are inexcusable and, perhaps more importantly, don’t fit within the Girl Scout Law.

In the wake of the backlash — which included calling Girl Scouts and protesting their involvement in the march — the national Girl Scouts council responded by providing an exclusive statement to NBC news:

At Girl Scouts, our movement is made up of individuals who hold political beliefs and convictions as varied as our nation itself. And because every girl has a home at Girl Scouts, every girl in our movement is allowed her own ideas, opinions, beliefs and political ideology. Our fundamental value is empowering girls to be leaders in their own lives. By helping them build the courage, confidence, and character to lift their voices, champion their views, and be advocates for the issues and ideas important to them, Girl Scouts supports girls as they become catalysts for change who strengthen their communities.

Of course, we are a nonpartisan nonprofit organization that by law cannot take positions on political candidates or parties — and we take this very seriously. Advocating for change on issues one cares about isn't at odds with participating in a century-long tradition that represents the peaceful exchange of power.

The organization is made up of individual people who are entitled to their own beliefs, and I am one of those people. I am a Girl Scout troop leader. I took an oath to teach my girls to live by the Girl Scout Law, and that "law" states among other things that we will do our best to be friendly and helpful, courageous and strong, responsible for what we say and do, make the world a better place, and be a sister to every Girl Scout. Trump, in my opinion, embodies the exact opposite of the Girl Scout Law. And yes, the things the president-elect has said against and about women are absolutely inexcusable.

Do I feel, personally, that marching in the parade would mean I support the president-elect? Yes. Do I think that this president will be a leader who will empower women? Absolutely not. But would I deny any girl the right to make her own choice? No, I wouldn't. I've been an unorthodox troop leader since day one. I'm waiting to get fired any day now for my lack of organization and paperwork accountability. But I didn't get into Girl Scouts for the badges or the arts and crafts. I wanted to be a troop leader to raise the next generation of badass do-gooders. And I'll do that with or without the Girl Scout name.

Within my own group of young girls, we have polarizing political views. Even though I’d planned to talk about what it means to be a part of a community in preparation for our Take Action project, the girls turned the conversation to politics at our troop meeting that took place the day after the Nov. 8 election. And since Girl Scouts meetings are supposed to be girl-led, I let them run with it, not knowing what would happen next.

I never was a Girl Scout as a kid, and I'm wildly unorganized. So I am admittedly a very unorthodox Troop Leader. I'd been trying to follow one of the official journey books, so our meeting started out with us drawing concentric circles to talk about how we fit into our family, our school, our community, our city, state, country, and world. We talked about how all the change we want to see in the world starts with us.

Girls have been taught for too long to stick to polite conversation. But Girl Scouts is about raising strong leaders. The point is to focus on what is important to them, and guide them in their journey to becoming young women confident in their convictions. So I went off-script and we all started to talk.

Our next activity was supposed to be a brainstorming session about what changes we wanted to see within our school: How could we start small and make our school better for everyone? We took a break to pass out our snack, and I overheard the girls start to talk about the presidential election results from the night before. To be honest, my own kids hadn't seen any election coverage because the race got so nasty, and the things that came out of the candidates' mouths weren't suitable for children's ears (or adults' mouths for that matter). But my own child had come home with questions, and judging from the conversation I overheard at snack time that day, they had all been discussing the election at school among their peers.

Some of the girls were happy Trump was elected. They’d heard he was going to "make our country safe" and "make everyone rich." Some of our girls were mad and scared. They heard that Trump says mean things about girls, and they were worried he wanted to make some of their friends’ families leave the country.

My first instinct was to steer the conversation back to our project, since I'd been taught not to talk politics or religion in mixed company. But I let them continue. Girls have been taught for too long to stick to polite conversation. But Girl Scouts is about raising strong leaders. The point is to focus on what is important to them, and guide them in their journey to becoming young women confident in their convictions. So I went off-script and we all started to talk.

I asked the girls if they'd seen the election results, and they all said they had. We talked about how exciting it was that one of the major party candidates in this election was a woman. One girl said, "Yeah, but she's really bad and mean." Another girl piped up with, "No, she isn't. Donald Trump is mean to girls." I stopped them there and told them it sounded like we'd all heard different sides of the story. I asked if anyone knew the candidates personally. No one raised their hand. I asked them to raise their hand if they thought the president should always be nice to girls, no matter who they are. They all raised their hand.

I reminded them that change starts with them. They couldn't control who was president or what the president does while in office. But they could lead by example. And no one, not even the president, should be allowed to treat girls with anything but respect.

They continued to have an open discussion. The girls who were excited about Trump winning started to question the girls who said he was mean. They hadn't heard that he'd said bad things about people. One of our girls with brown skin said she was afraid of Trump because of the "things he's said and done." Because the other girls in the troop love her and care about her, they listened to her fears. They didn't yell at her and tell her he was going to "Make America Great Again." They saw her fear and empathized. One of the girls who had initially supported Trump walked over and put her arms around the other girl and told her "Well, I won't let anyone be mean to you."

I asked what was different in their bedrooms the morning after the election. What was different in their houses? Their school? They looked around at each other. One girl said she thought maybe she'd gotten taller. I told them that the election results didn't change who they were. They were all still Girl Scouts. They were all still sisters. And they all had the same job they did as the day before: to live by the Girl Scout Law. We listened to each other to understand, not to respond. After all, no one has ever truly changed a person's perspective by telling them what to think.

By the end of the meeting all the girls had shared their thoughts on the election. We closed by joining hands and once again reciting the Girl Scout Law. I reminded them that change starts with them. They couldn't control who was president or what the president does while in office. But they could lead by example. And no one, not even the president, should be allowed to treat girls with anything but respect. It was OK to respect authority, but also to speak out against injustice. I reminded them of the things all young girls and women should be told day after day, again and again: They are strong; they are smart; and they could be the change they wanted to see in the world.

Tomorrow, Donald Trump will officially take the office of President of the United States. Hundreds of years ago, America was founded because a group of people were sick of the people in charge abusing their power. Our forefathers and foremothers fought for the freedom to use our voices and to hold our leaders accountable. I personally think our incoming president has a vile track record. The things he has said about girls and women are nothing short of evil and disgusting in my opinion. And I personally wouldn't meet him for a Beef 'n Cheddar on my lunch break, much less march in a parade to celebrate his inauguration. But Trump didn't make the Girl Scout promise. I did. And our suffragette sisters fought for the rights of all women to have a voice. The Girl Scouts who are marching in the parade have voices that are just as valid as mine.

I'll be marching in a different parade this week — the Women's March on Washington, and I want to take my oldest daughter, although I fear for her safety. Whether or not she goes, she'll know her mother stood shoulder to shoulder with other people for women's rights. For her rights.