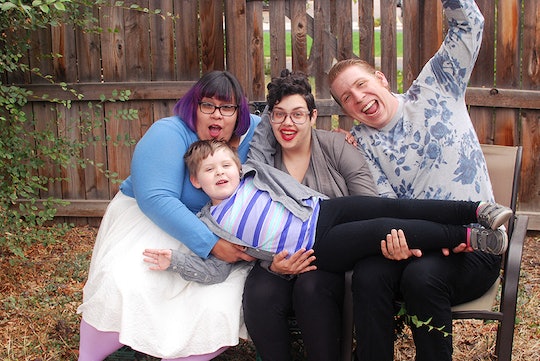 Honestly, I Hope My Kid Will Be Queer

I come home from work every day to a full, bustling house. I live with two partners, Samantha and Jon, and our kid, Arthur. Samantha’s sister, Mandy, also lives with us. When I come home, our house is full of laughter and voices, and I get swarmed with hugs. When I come through the door, I can shrug off the tension of the rest of the world, because I know that this is a space where I am safe.

I am queer, as are both of my partners. I am also asexual and transgender. My kid Arthur is what is affectionately know as queerspawn, a term used within the LBTQIA community to describe the children of queer families. I didn't set out to build a queer family with my partners — it just happened. But I wouldn't be surprised if my kid turned out to be queer too, and frankly, given how positive my experience of living in a queer family has been, sometimes I hope he is.

I deviate from the norm in many ways. When I leave my house in the morning, I know I will get misgendered by my coworkers, who will refer to me as "she" and "her" instead of by my pronouns, "they" and "them." If it’s a particularly bad day, strangers will yell homophobic slurs at me while I’m walking around town.

In many ways, I’m lucky. Unlike many trans and queer people, the violence I face is not physical. It's mostly just irritating. It’s there, day in and day out, but I can handle it. But in a world that is incredibly hostile to LGBTQ people, I am so grateful for my family, which serves as a bastion of warmth and acceptance. And I hope my son is lucky enough to have the same experience.

My son Arthur is a transgender boy. (To be clear, just because Arthur is transgender does not mean he will be queer. Gender identity and sexual orientation are separate, and there are transgender people who are straight.) He was assigned female at birth, but his non-conforming behavior was clear and consistent from day one. It started with his hair. He hated wearing it long, and he hated it when we did anything with it. No ponytails, no braids — nothing. He also refused to wear dresses and skirts.

For a long time, he didn't name his gender when asked; usually, he just changed the subject. But then, when he was about 3, he said he was a boy. And he never wavered. Shortly thereafter, he told us he wanted a new name, a boy's name. We let him pick one, and he picked Arthur. A few months ago, his name change went through the courts. It's now official.

Being queer can be isolating and scary. The societal hum of homophobia and transphobia is a mean thing that can creep into your bones and make it hard for you to truly know yourself. But being queer can also be an immensely powerful bond that ties people together.

When Arthur displayed a great deal of gender non-conforming behavior as a teensy child, we all welcomed it. We didn't have to have any weird, difficult conversations about the legitimacy of queer identity, or whether or not he was too young to know who he truly was. Instead, we just rolled with it. And I think that's largely because he was raised in a queer family.

Being queer can be isolating and scary. The societal hum of homophobia and transphobia is a mean thing that can creep into your bones and make it hard for you to truly know yourself. But being queer can also be an immensely powerful bond that ties people together. I'm lucky enough to have an incredibly tight-knit family, and the simple fact that we are all queer makes our home a safe place for queer people, a place where I feel uniquely recognized and understood. Such places are rare treasures.

Raising a kid in my community and my family is a transformative and revolutionary act. This is not why I chose to have a kid, but it is true. Queerness and transness is normalized for Arthur, because we have a ton of queer and trans friends and family who come through our house and love him to death. Watching a kid grow up without the constant constraining force of homophobia within his own household is amazing. He is having an altogether different experience of queerness and childhood than I did or my partners did. For us, watching him grow up is a master class in what might have been for us: we are parenting the way we wish we had been parented in terms of our queerness.

Part of me assumes Arthur is queer like the rest of us. I try to fight that assumption — after all, I hated it when my parents assumed things about me. But it also feels safer to assume he’s outside the societal norm than that he’s inside it. It feels safer, as a parent, to assume he’ll need additional support and caring and love from us, and that we’ll need to make our home an oasis of acceptance for him, the way it has been for us. If he is queer, we will be a bastion of support. If he is queer, we will be here to talk him through it.

We do joke that it will be strange if Arthur comes out to us as straight. “Are you sure? We thought we were straight for a long time," we imagine saying to him. "It could be just a phase! Just don’t rule out that someone else might come along.” Of course, we're mostly joking, and we obviously would love him no matter what his identity is. But we’re all half-expecting him to turn out like us.

Part of me would love it if he were queer. What parent doesn't want to connect with their kid over shared experiences and identities?

Part of me would love it if he were queer. What parent doesn't want to connect with their kid over shared experiences and identities? When I look into the future, I can absolutely see myself bonding with him over the little moments of awkwardness and the larger moments of anger and frustration you deal with as a queer person. I don't wish him any more marginalization and oppression than he'll already face as a trans person. But I can't help but think that if he's queer, there'll be yet another community he can join, another supportive place for him to vent about that oppression. There are other queer people who will listen and sympathize with him beyond his family. He will need those people when he gets older and flies away from us.

That said, until Arthur figures out his identity, I know that my role will be to make space for him to chart out his own course. What I needed most as a queer kid and as a trans kid was space to figure out my own identity, without judgment and without coercion. Whatever identity Arthur settles on, he’ll need that, too. Because growing up is hard for everybody, no matter what your sexual orientation is.