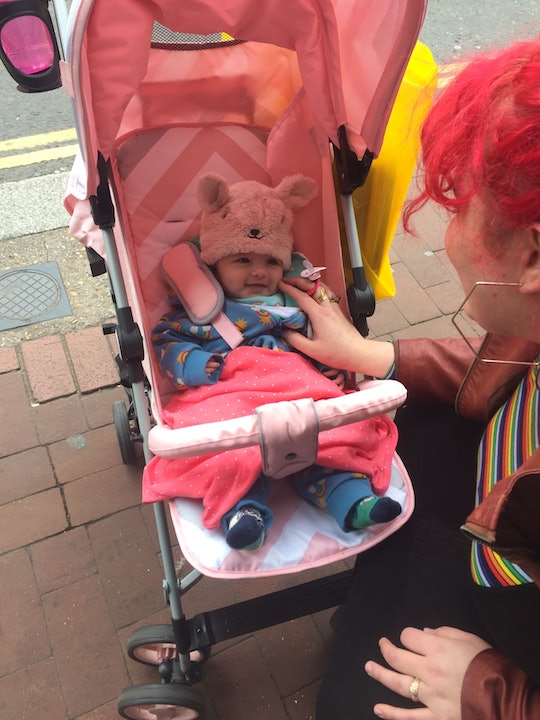 I'm A Selfish Mom & I'm Not Apologizing For It

When I first became a mom, I tried to commit to that persona. I neglected my numerous social media pages and the friends who came with them. I never painted my nails, or put on makeup, or picked up a novel, or changed out of pajamas, or took bath bomb-infused soaks. Instead, I sacrificed self-care entirely.

It didn't take long for me to realize that sacrificing my own self-care would likely come at the expense of my mental health. And ultimately, I knew I had to take strides to make sure I had the best mental health possible, so I could be the best mom possible. For that reason and more, I now refuse to apologize for being a "selfish" parent.

There's an idea in our culture that being "selfish" means being completely wrapped up in your own needs and interests, at the expense of the needs and interests of other people. But I reject the idea that taking care of oneself necessarily means neglecting to take care of other people. After all, there's a reason why airplane passengers are asked to put on their oxygen masks before helping others put on theirs. Quite simply, you cannot help anyone else before you help yourself.

I will continue to make time for myself outside of motherhood. I will make sure that I don't lose touch with my friends, that I don't forget how to take the trains into our nearest city, that I read the books I want to read, and drink the drinks I want to drink.

Yet I frequently see mommies chastised for daring to go back to work after having a child. I have seen other mamas feel the need to boast about how long it's been since they've had a night out away from the baby. They seem to take pride in their sense of isolation. It's the kind of pride that comes from doing something you've been taught to correlate with "success," no matter how problematic associating self-sacrifice with virtue might be.

Likewise, I've seen the expressions of my family members upon learning that I'm off to see a friend for dinner; or that I'm headed to the cinema for a few hours. "But your baby," they cry. "She's not even 6 months old."

To these folks, it doesn't matter than I've spent the better part of two days pumping enough milk to make sure my baby girl has enough nourishment in my absence. It doesn't matter that she'll be looked after by her father or another loved one. It doesn't matter that her safety isn't a concern, or that she loves getting some one-on-one time with her grandparents when mom and dad go out for a couple of drinks. All that matters is that I'm doing something that's seemingly more for me than it is for my baby. And that is apparently appalling to them.

Realistically, I know that I am not someone who's happy to be "just a mom" (as in, to dedicate every ounce of myself to motherhood). Some people are, of course, and I would never fault them for that. I just happen to know deep down, without a doubt, that I love my daughter too much to risk associating her with bidding the parts of myself I love goodbye.

But I also want my daughter to learn the importance of allowing herself to be as multi-faceted as she'd like to be. I don't want her growing up believing that being a dedicated student, for instance, requires studying all the time at the expense of having fun, and I hate to think of her sacrificing her mental health or self-care in exchange for being the kind of employee who never says no. Similarly, it makes my skin crawl to imagine her accepting the idea that one's sense of self dies when a baby comes into the equation.

Far too often, women are told that aspiring to greatness in any category — be it relationships, education, motherhood, or career success — means dedicating oneself so fully to that thing that everything else becomes unimportant. We must prioritize what our teachers, partners, bosses, or babies need, forgoing what we need along the way. We must be people pleasers, always and forever.

I don't want to lose myself, largely because I don't want my kid to ever lose herself — to anything or for anyone.

I cannot do that to my daughter, though. I would never want to forgo my needs, wants, and desires in such a way that she believes she must someday forgo her own, for someone else. Learning to exercise self-love and self-care is an incredibly valuable lesson I hope to instill within her. But she cannot do this if she does not first learn to listen to herself, trust her gut, take the necessary me-time, and allow every facet of her identity to thrive.

So I guess I plan to lead by example. I will continue to make time for myself outside of motherhood. I will make sure that I don't lose touch with my friends, that I don't forget how to take the trains into our nearest city, that I read the books I want to read, and drink the drinks I want to drink.

I don't want to lose myself, largely because I don't want my kid to ever lose herself — to anything or for anyone. If being selfish is how I make that happen, then I guess I'm happy to be a little egocentric.