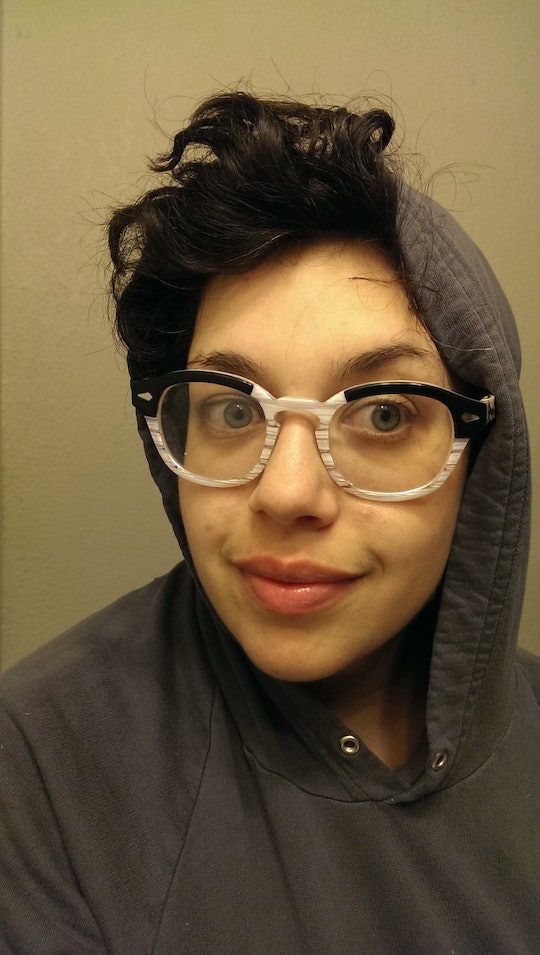 I'm A Transgender Parent, & Here's What It's Like To Come Out Over & Over Again

Living as a transgender parent is an exercise in coming out, over and over again. I thought the first time I came out as trans, I would just do it once, and then I could move on with my life. Instead, I came out in ripples, to different groups of people: my partners, then my close friends and my sister, then my Facebook friends, such as old coworkers, acquaintances and various half-estranged family members. Now that my son Arthur, who is also transgender, is old enough to interact with doctors and teachers and principals, I am coming out to them, too.

Now, I write about my life on the internet, which means I have to out myself to total strangers on a daily basis. Depending on who you ask, writing about your life on the internet is either brave or shortsighted; sometimes it's both. I've written about being trans and raising a trans child before, and while the response has mostly been positive, sometimes I wish I hadn't set the words down at all.

I recently published an article about the worries I have for my trans son since Trump was elected president. It's a scary time for LGBTQ people in the United States and especially LGBTQ children: Thanks to the anti-gay policies of Trump's vice-president Mike Pence, I worry that Arthur's school will no longer be respectful of his gender identity, and that he will get bullied. I wrote about my concern that the already meager protections trans and queer people have won will be rolled back.

After the article went live, I spent a few hours blocking trolls on Twitter and trying to ignore Facebook. Most of them accused me of somehow indoctrinating my son, who is transgender, because I am transgender myself. They said that I had someone conflated his gender identity with my own, that I had brainwashed him. They accused me of being a bad parent, simply because of my gender identity.

The things people on the internet said were hateful and ridiculous, but they were also all too familiar. That's because they were similar to the things I heard six years ago, when I came out as transgender while I was pregnant with Arthur. Close family members and friends, real people who mattered to me, said the same thing: I was too crazy to be a good parent. I was confused about myself, and I would confuse my kid. I was a freak. I was making it up. I was actually just a closeted lesbian and should just come out already. My partner Jon had a cousin who emailed him soon after Arthur was born, with a long list of concerns — had I seen a psychologist? Should I really be parenting? What did this mean for Jon? Was Jon gay now?

People worried that my refusal to align myself with the gender binary would confuse my child. "Kids need to categorize things and people," said a friend of mine. "If you aren't doing that, won't he get confused? He won't know what to think. He won't know what boys are and what girls are."

"He'll learn the same way I did. Everyone in the world will teach him. He'll learn through TV, and from the toy aisle, and from you," I said. "He won't learn it from me. But I don't think I'm messing him up by showing him some people fit into different categories."

These remarks deeply wounded me. I'd spent so much of my life slowly killing myself by pretending I was something that I wasn't. This struggle ate up years of my life that I will never have back. But after I came out, I realized that not only do I have the freedom to accept who I really am, I also have the freedom to surround myself with people who accept me and respect my gender identity. So I don't talk to a lot of these relatives who criticized me for coming out anymore. Because as anyone who is LGBTQ knows all too well, too often, coming out means letting go.

When Arthur came out as transgender, it was as much a surprise to me as it was for anyone else. I don't think that my gender identity has anything to do with his at all, and while there have been few reliable studies to this effect, the research we do have shows that kids of LGBTQ parents aren't any more likely to be LGBTQ themselves.

I am trying to parent my son as I wish I had been parented as a young transgender person: with empathy, and with room to explore the sometimes chaotic and confusing world of gender.

Admittedly, because I am trans, we left the door open for the possibility of him being trans more than most families, simply because we talk about gender differently than other parents do. We asked him if he was a girl or a boy or someone in between, instead of assigning him a specific gender, and when he was about 3 years old he started steadily and consistently identifying as a boy of his own accord. When asked why, he said he was "like Daddy, not like Baba or Mama."

To this day, Arthur doesn't use the word "transgender" to describe himself; he just uses the word "boy." But we have to use it for him to clarify how his school refers to him, since the name he uses is different than what is on his legal documents. We had given him a girl's name at birth, and he said hearing it felt like "a thousand ants biting" him, because it reminded him that people didn't see him as he wanted to be seen. So we let him change his name. He picked Arthur himself.

Arthur's process of finding a gender identity that fit him was smooth and organic. Because he is only 6 years old, it might evolve even further, which is totally OK with us. I am trying to parent my son as I wish I had been parented as a young transgender person: with empathy, and with room to explore the sometimes chaotic and confusing world of gender. He doesn't use the word "transgender" to describe himself; he just uses the word "boy." But we have to use it for him to clarify how his school refers to him, since the name he uses is different than what is on his legal documents.

The assumption is that trans people are unfit parents, which leaves trans parents like me feeling incredibly vulnerable. Many of us wonder what our rights are, and fear that our kids could be taken away.

Arthur is happy with his chosen gender identity, but the random commenters who tweet at me or leave offensive remarks on my Facebook posts don't see that. The old tropes come up again and again: trans people are crazy, trans people are dangerous (re: the mention of Munchausen's syndrome by proxy, a condition that refers to parents who literally slowly poison their children to gain attention), and trans people are selfish. Other commenters purposefully misgendered me altogether, referring to me as "she" or "her" instead of my chosen pronouns, "they" or "them."

The assumption is that trans people are unfit parents, which leaves trans parents like me feeling incredibly vulnerable. Many of us wonder what our rights are, and fear that our kids could be taken away. It's not unheard of, for instance, for lawyers to use a transgender person's identity as "proof" in a custody battle that trans people are unfit parents.

These reactions make me feel exhausted. And they also make me want to write more articles like this: ones that normalize trans people's experience, that challenge these assumptions about who we are and what we are capable of. I write them because the reactions I get come from a place of ignorance, and the best way to counteract that is to show that trans people are simply people.

I rarely see parents like me or families like mine represented when I read parenting magazines and websites. I am so often rendered invisible, yet to be vocal about my own life is to invite derision and hatred. I don't want that, but the alternative — not to be seen at all — is even more terrifying to me.