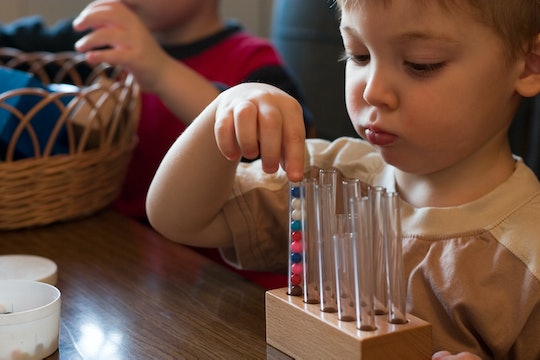 I'll be super honest and admit that I never intended to become a Montessori parent. In fact, I absolutely did not want to find myself among the Montessori ranks. But, such is life. One day I looked up, caught myself by surprise, and realized what had happened. So it's time for me to come clean: I'm an accidental Montessori parent, and here's how it happened so you can keep it from happening to you, too. Or, you know, so you can just accept the inevitable with open arms. All I'm saying is that it took me a long time to get here, but now you might say I'm hooked. I might even try to convert you, too.

Between you and me, I always thought Montessori was for "other" kids with "different" parents. You know, parents who had more money and who had way more time and energy to do things like knit wool hats, make organic, homemade treats, and search Pinterest for sensory activities and playground plans. Also, it seemed like most Montessori parents I knew were way more crunchy than I ever was. In the end it didn't really matter, though, because all of the Montessori programs near me either had a waiting list roughly 18 years long or didn’t have a schedule that met my needs as a working parent.

So, my kids went to a conventional daycare and preschool and did great, despite not really being conventional (they get that from me, thank you very much). Then my partner and I moved to a new town, and a Montessori school opened near our home. I went to check it out and learned more about their adventure playground, observation-based teaching philosophy, their focus on child-led learning and fostering independence, and (most important for me) their focus on having respect for children as human beings.

My partner and I decided to enroll our son and see how he’d do in this new environment. Honestly, I was pretty impressed. It took some getting used to (for all of us), but eventually he totally thrived and I started to change, too. Despite my best efforts I became a Montessori parent, and here's how it happened: