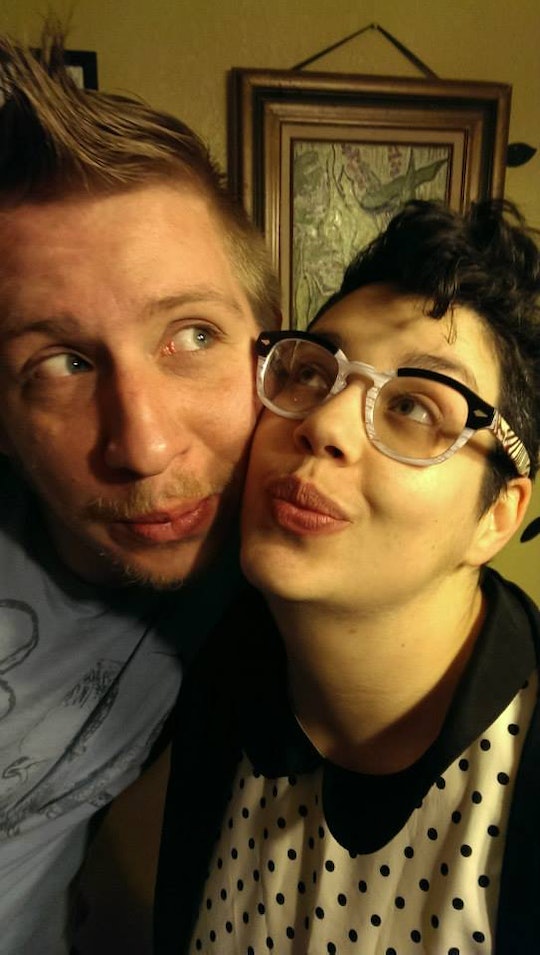 My husband Jon and I have been married for four years. We were together for 10 years before that. We got hitched at the courthouse, while both of us were wearing cut-offs and nondescript T-shirts. We sealed the deal with a high-five as our 2-year-old ran around us in circles. Marriage itself was never a hugely important thing to us (we only got married so he would have health insurance), but the commitment is real and the love between us is there.

For me, I came out to Jon on three separate occasions. First, as a non-binary transgender person. Then, almost immediately after, as queer. And then, about a year later, I came out to my husband as asexual.

Like most things having to do with sexuality, asexuality is complicated and can be defined on a spectrum. But according to the Asexual Visibility & Education Network (AVEN), an asexual person can largely be defined as someone who does not experience sexual attraction in any form. Being asexual doesn't mean you don't experience love, or that you're incapable of having an intimate relationship. It just means that you're not interested in having sex.

When I told Jon I was asexual, I was happy to discover that he didn't make it about him. He didn't fret about his sexual prowess or my lack of satisfaction in bed. He didn't make me prove my asexuality or qualify it. He accepted it.

It's complicated and scary to come out as asexual when you're married, especially because Jon married me with the expectation that we would be having sex. Hell, we had been having sex — enough sex that I'd gotten pregnant and had a kid. Unlike many other asexual people, I also enjoy having sex, and I'm not weirded out or repulsed by it. But I don't crave or desire it.

More often than not, when Jon and I had sex, I was doing it because I knew he wanted to, not because I wanted to. I mostly liked that he liked it. We had sex maybe twice the whole time I was pregnant, because pregnancy made my entire body far too sensitive for me to enjoy virtually anything, especially sex. But I found that not having to think about sex during my pregnancy was, oddly, a reprieve for me. I also knew that while my body was hypersensitive while I was pregnant, my sex drive hadn't changed dramatically. For the most part, it had always been that low.

After Arthur was born, Jon and I had a lot of frank conversations about sexuality. I came out as a non-binary transgender person, and then I came out as queer. Throughout those discussions, my asexuality lurked just under the surface. By the time I started reading about asexuality and put a name to my nonexistent sex drive, Jon was pretty used to the coming out conversations, so he handled this one beautifully.

There are a lot of myths surrounding asexuality. Some people believe that it's not a "real" sexual orientation, or that people who identify as asexual are just terrified of sex.

When I told Jon I was asexual, I was happy to discover that he didn't make it about him. He didn't fret about his sexual prowess or my lack of satisfaction in bed. He didn't make me prove my asexuality or qualify it. He accepted it. He said it made a lot of sense, given how mismatched our sex drives had been since we started dating. He said that he understood if I wanted to change something about our relationship. And then he gave me a hug. He said we'd figure it out, because we always do.

But I was scared of how the conversation could have gone. I was scared he would say that because we'd had sex before, and that he wasn't asexual, that I should just keep having sex with him anyway. I was scared he'd say I was just frigid and needed to get over it. I was scared he'd say I was clearly just a lesbian, since I'd recently come out as queer. There are a lot of myths surrounding asexuality. Some people believe that it's not a "real" sexual orientation, or that people who self-identify as asexual are just terrified of sex. I was scared Jon would believe those myths, because those were the things I'd been telling myself while I'd been trying to convince myself I wasn't actually asexual.

That said, I am a lot happier since I've come out as asexual. My marriage feels more stable and more comfortable for me, and intimacy feels much less performative. Jon and I are in an open relationship. We opened it up at the time when I came out as queer, and it stayed open. I date only occasionally. He has a committed girlfriend, who is lovely. We are still very much together, and our relationship is still evolving, even though we've been together for 14 years.

More Like This
How To Ask Your Partner For Support When You Need It
How Do I Rediscover My Sexuality When I’m Completely Touched Out?
Tips To Co-Parent With A Stepparent Successfully
How To Approach The Topic Of Emotional Labor With Your Partner