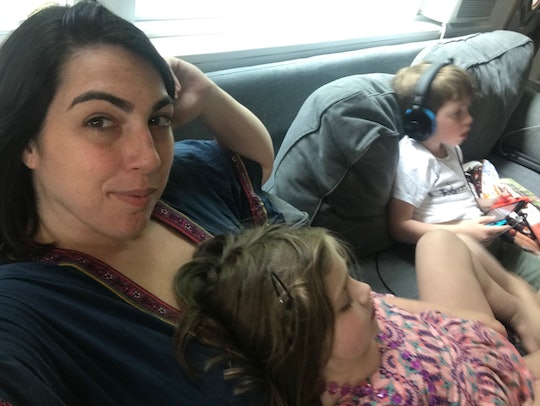 Growing up, on the rare occasions I got sick, my ability to bounce back was so quick that it became a joke in my family. "Oh, is Jamie coming down with something? That's OK, she has about 15 minutes to take a nap and get better." Now the darker family joke is that I'm making up for 34 years of perfect health with an illness that's kept me perpetually sick for two years. We (my doctors and I) still don't know what's wrong, and we've been wrong every time we've guessed. So now I'm parenting with a mystery illness, which is just as fun as it sounds.

Without getting into a million details that will make me sound like an old lady who traps you in an overly-personal conversation about her assorted physical ailments ("... next let me tell you about the rash on my ass... "), basically it's gone like this for two years: I get "a cold," but it never goes away. And it gets worse and worse and I get more weird symptoms until I'm literally struggling to breathe and breaking ribs because I'm coughing so hard. So then a doctor (I've seen about about six or so) gives me steroids (which is neither a good long-term solution on account of serious side-effects nor addressing the root issue). I get better (thank goodness) and then I go off steroids and then within a couple weeks I get "a cold." Go back to the beginning of this paragraph and repeat... for two years. This has been disheartening, scary, frustrating, emotional, and draining. But one of the hardest aspects of this has been the fact that I have two children, now four and seven.

Raising kids is demanding on every level, physically, mentally, and emotionally. Even when it's wonderful it's work, and I'm fine with that. I kind of knew that when I signed up to have the first one and I definitely knew that was the deal when I popped out #2. It's hard work I enjoy... like, you know the way farmers on TV shows talk about their love of working the land or whatever? It's like that. It can be grueling, but I get a deep, calm, folksy sense of satisfaction from it. And, of course, I love these little guys and I want to do everything I can for them.

But you know what else takes a lot out of you on every level? Being sick. Especially when you don't know why or for how much longer you will be. It makes everything else in my life a lot harder to accomplish and even to enjoy. And some days I just don't have enough to give anything else in my life but my illness... whatever it is... which is the last thing I want to concentrate on, but when walking across a room leaves you out of breath you don't always have much of a choice.

So it means there are days when all I can do is lie down and watch my husband do literally everything to care for the house and kids. It means my kids ask to play and sometimes I have to tell them I can't, even when I really want to. It means feeling tremendously comforted when one of them brings me a blanket or a cup of tea or kisses my forehead, but then quickly feeling terrible that they feel they should be taking care of me. It's feeling resentful when they don't understand when I need rest and comfort... and then feeling guilty that I feel resentful.

It's feeling guilty a lot. That I can't play. That my husband is doing everything. That I can't just muscle through. Guilty that my daughter's teacher mentioned a little while ago that she'd been "out of sorts," but then it made sense when she cried to the teacher about the fact that "mommy is sick." That I have to drag my kids to another one of my doctor's appointments. (Guilty because they don't want to be there and guilty because I know the office staff doesn't love that there are kids there.) Guilty that all of these appointments, medications, tests, surgeries, and procedures could have paid for a family vacation, and I couldn't even have the decency to get better after all of them. Guilty that I complain at all, because there are people who have it so much worse than me: people who don't ever respond to treatment, people whose pain is constant (at least I have periods of relative wellness). It's feeling guilty about the fact that I know the guilt is absolutely ridiculous but I'm buying into it anyway.

It's also scary. Because over the past few years I've always come back from the brink, but every new cycle of illness there's another symptom. What if the next cycle brought with it something that didn't respond to treatment? Or what if we never figure this out and this is just my life from now on? What if one time, instead of waking up in the middle of the night because I can't breathe, I just don't wake up? I don't think that will happen, but I also didn't think that two years into a "cold" I'd still be feeling like total crap. That's terrifying enough to contemplate for myself, but considering what that would mean to my family is even worse somehow.

Fighting that mental battle is exhausting. Fighting for my health is exhausting. And doing everything I need to do (when I can) to be a parent is exhausting — more so than it was back when it was just run-of-the-mill exhausting. Keeping up hope is absolutely essential, for me and my kids... but the effort hope requires is also exhausting.

Living with an illness like this is like living under an anvil that keeps falling on you. Every time it happens, the anvil repairman is able to pry it off, but they always put it right back over your head, exactly where it was before. "I don't know why it keeps falling," they'll say, dusting off their hands. "But maybe it was because [insert latest theory here], so it shouldn't fall again. Just hang tight, OK?" I'm grateful I'm not to being squished anymore, but I'm still left sitting there under the dangling anvil, hoping it won't fall on me again but knowing that it probably will until we can figure out why it keeps falling in the first place.

Self-care is difficult for moms — both practicing it (who has the time?!) and accepting the fact that, yes, actually, this is important and you need to do it. Because society pushes the idea on women in general and moms especially that they should be endlessly self-sacrificing. Well, in the last two years, I've needed more self-care than most people. And not the bubble bath, mani/pedi fun kind of self-care: near-constant doctor's appointments, endless treatments, and a lot more rest than I'd care to require. Pushing back against the conditioning that tells me any time spent caring for myself is frivolous has been a constant effort as my doctors and I try to figure out what the hell is going on with my body — effort that would be much better spent on other things. Things that make me happy. Things that might make me feel better. I can only hope that sharing this can do a bit to dismantle a culture that says women and mothers aren't worth their own efforts.

More Like This
The 4 Main Parenting Styles & Which Is Best For Kids
How To Handle It When Someone Criticizes Your Parenting
Festive Mommy & Me Holiday Nail Ideas To Try
101 Advent Calendar Activities, From Books To Read To Cookies To Bake