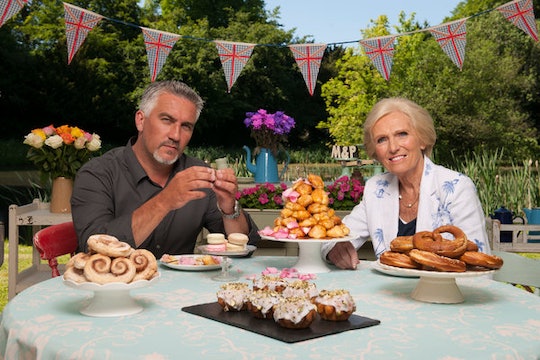 Paul Hollywood Got Me Through A Tough Six Months

I never skip the intro to The Great British Baking Show on Netflix, a jaunty tune accompanied by charming images of baked goods and cute kids. It's part of the soothing ritual of watching. Besides, I owe the show my undivided attention from the very beginning until Netflix automatically starts the next episode. Because TGBBS and judge Paul Hollywood got me through the last six months.

To understand my last six months, you kind of have to start two years ago. In February 2017, I got sick. It seemed like a pretty standard but nasty cold and, as such, it never struck me to go to the doctor. “It’s a virus,” I’d say. “There’s nothing you can do for a virus except ride it out. Why waste the time and money on a doctor?” It may sound like hubris, but for most of my life that mentality was pretty solid. My (rare) illnesses resolved themselves quickly. But after several weeks of coughing so bad I actually broke a rib (oh yeah: that can happen), I decided it was time to be an adult and go to the doctor.

And here’s what happened over the course of the next two years, generally speaking:

For the first year and a half or so, it was scary and annoying, but I could handle it. I was always so happy to be brought back from the brink of hospitalization every time I became ill that I could endure everything that went along with it: the battery of expensive tests, the many side effects of the steroids (Weight gain! Mood swings! A million little chin hairs!), and the fact that I was at a medical appointment, on average, every nine days. But gratitude can only take you so far for so long.

Remember House M.D. with Hugh Laurie as the obnoxious but brilliant titular character? Remember how every week patients would come to him with mystery illnesses and he would provide them with a weird diagnosis by the end of the hour? I had been living my own personal episode of House for eighteen goddamn months... and not one of my doctors had been as hot as Hugh Laurie, which felt unfair. Physical illness was eventually began to take a mental toll. I was always stressed and becoming depressed. I was getting really desperate for any solution, so when someone suggested surgery, I jumped at the opportunity.

Guys: I have had an emergency c-section and a 9-pound baby vaginally and the recovery for those experiences was a cakewalk compared to the week following this surgery. I was in a lot of pain and all I could do was sit on my couch. I was also worried — what if all this pain an expense came to nothing? I needed a distraction from both the pain and the question.

The premise of TGBBS is straight-forward and, to be honest, entirely unremarkable. Between 10 and 13 contestants compete for the title of "best amateur baker" in the United Kingdom. Generally speaking, one contestant is eliminated each episode. But here's the thing: everything is just nice.

The setting (a great big beautiful tent on the grounds of an English country manor)? Nice! The kitchen equipment? Nice! The exterior shots of flowers and baby ducks and lambs that punctuate the competition? Nice! The music? Calm, dulcet, nice! And then there's the contestants, who are all so irrepressibly friendly, encouraging, and helpful toward one another. I've never once heard "I didn't come here to make friends: I came here to win!" and you get the impression like, yes, they want to win, but they are very happy to be in the tent making friends.

Of course you can't have a competition without judges. In more recent seasons, the colorful and warm Prue Leith has stepped in for the OG, Mary Berry, a delightfully prim but also very warm replacement. But one has remained consistent from day one: the impossibly named Paul Hollywood.

Often held up as the tough or "mean judge," Paul is known for his trademark tacit but piercing gaze and blunt criticism — Hollywood saves the sugar-coating for the pastry. (*rimshot*) The highest form of praise he can give? The "Hollywood handshake," which consists of him shaking your hand and saying something like "Well done." That's it, and yet I literally happy-gasp every time it happens.

He might say 'That's a shame,' or 'A bit disappointing,' but he never goes full-on Simon Cowell.

But here's the thing: he's not mean. Like the rest of the show, he's actually quite nice, just not on the same level as a lingering shot of a calf prancing in a meadow. He won't tell you something is good if it was terrible, but I've rarely heard him straight-up trash anyone's efforts. He might say "That's a shame," or "A bit disappointing," but he never goes full-on Simon Cowell, like "I want to vomit this bakewell tart into a box and mail it to your mother to punish her for birthing your talentless husk."

And guys? The idea that the "Hollywood handshake" is the most effusive praise he can give?

I have seen this English baker emote like a friggin' hype man after a bite of a particularly delicious cake. "Are you kidding me?!" he's asked. "That's OON-bee-LEAF-able!" The more excited he becomes the more you can hear the north of England in his voice — imagine Jon Snow talking about baked goods in his brooding, folksy brogue. "Winter is coming. When the cold winds blow from the North... that will actually be helpful in ensuring that your cake is cooled down enough to successfully apply the buttercream."

So, like, he's mostly got his persona under control, but he's not opposed to dropping it from time to time to ensure us that he's very clearly a person underneath. On more than one occasion, he has reminded a fellow judge that "no one is too posh to dunk" their biscuits in tea. Words to live by, surely. But I believe his trademark sprinkling of salt keeps the show out of the realm of the overly-saccharine. Paul's mostly implacable calm is a counterbalance to the people who are getting extremely emotional about toffee. And yet he is able to remain chill and serious without sucking the joy out of everyone else (or giving the impression that he's not having a good time).

This was everything I needed during my recovery. The best description I've ever heard of this show is "like Xanax for the soul": wonderfully soothing and highly addictive.

The surgery didn't work, by the way. Months later I'm still sick and we're still really not exactly sure why. And it might sound silly but I really don't think I would have been able to handle that blow — after years of similarly rough blows — without this show. It has become a valuable coping mechanism for me. Because everything I've been dealing with and continue to deal with is important, but for the next hour I'm watching, do you know what else is important? Whether Nadiya can get a perfect swirl in her Swiss roll.

Having something so nice and soothing as this show allows me to regroup, if only for an hour, and not get bogged down in my own problems. It enables me to take a breath and remain positive as we continue to try to figure out what's going on with my body.

So thank you Great British Baking Show, and especially you, Paul Hollywood, for ensuring that my life may be a bit of a soggy bottom right now, but that with time, and care, life could just as well dish me out a Hollywood handshake.