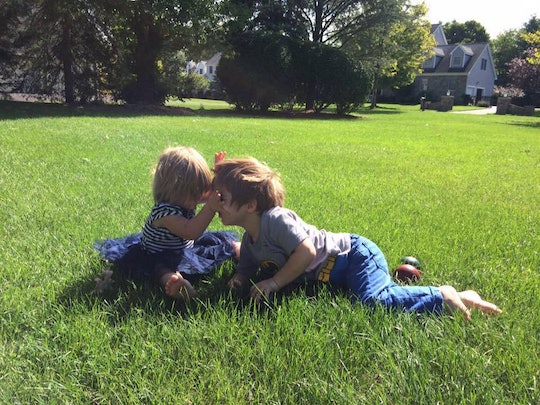 This Is When I Stopped Wondering If I Wanted Another Baby

The only aspect of motherhood I never doubted was that I wanted it. From early in our relationship, my husband and I knew our number was three — three kids. We even named them. It seemed like the ideal number, the perfect balance. But you know how plans go... mainly that they don't, usually, especially when you make them years in advance with no actual experience. The truth is I went back and forth and it took a while to stop wondering if I wanted another baby.

I hear the question a lot from friends, particularly other moms: "How do you know you're done having babies?" Or, on the other hand "How do you know you want another baby?" And the truth is there's no truth here. Seriously, it's on par with asking someone "How do you know what the best color is?" Well, for starters, there's no one, true answer and for another even the process of reaching your own personal answer is highly... well, personal. So if you're reading this article to find The Right Decision For You, sorry. That's not what this is. That's not what this could ever be. But I do believe we can learn more about ourselves by hearing other people's stories, so here's how I knew... and then didn't know... and then knew again... and then... well, you get the idea.

Like I said, the idea that motherhood was something that I wanted to pursue is the only part of this whole process I never doubted. So when I became pregnant the first time I was pretty pumped... even though pregnancy (despite everything my mother had ever told me about the experience) completely f*cking sucked. This detail, incidentally, will become crucial later, so keep it in mind.

After a grueling, painful labor that annoyingly culminated in an emergency c-section (why didn't you just tell me this is how it was going to go in the first place so I could have avoided all that unmedicated labor?!), my son was born and I was on cloud nine — about my baby, even about the whole kind of annoying experience. My incision wasn't even closed up before my husband and I started talking about "the next time."

Despite a difficult infant and the fact that we only sort of knew what we were doing (which is a really tough combo, FYI), we were completely in love with parenthood. We tried to work as a team and be kind to ourselves and the fact that we weren't masters yet. (Spoilers: seven years in and we're still not.) But we got better and better. We found balance. Our persnickety baby became more agreeable, slightly less volatile. So then we thought to ourselves...

"Yo, are we really going to risk screwing this up?"

We loved our family, and the fact that this happiness felt very precariously balanced made us rethink the idea that we needed two more. We still felt like "Yeah, probably. Eventually. In time. Down the line. Someday." But there was doubt where none had existed before.

Then I got pregnant again. Neither of us saw that one coming. Neither of us could quite figure out how it had happened. (As best we figure my previous "period" had actually been implantation bleeding.) But we were both as delighted as we were shocked. When I miscarried within days of my positive pregnancy test, I was heartbroken. The fact that this hadn't been planned didn't mitigate the loss. And once the initial devastation of that heartbreak cleared out a little bit, I realized it had taken with it any doubt I had about wanting another baby. I did. I really did.

I didn't have long to wait. Within three months of my miscarriage I was pregnant again, and this time my little embryo decided to stick around.

I never stopped being tremendously grateful not only for the fact that I became pregnant again relatively quickly, sparing me the worry that it wouldn't happen again, but that I was, indeed, pregnant. At the same time, this pregnancy was just as miserable as my first. In some ways it was more miserable, because the morning sickness and constant nausea that plagued my first pregnancy not only found its way back to me, but it lasted longer. And hey, between not being pregnant and nausea I was happy to take the nausea... but between nausea and feeling like a functional healthy human I was less happy. I spent 24 weeks of my pregnancy feeling like hot garbage smells.

A number of other factors accompanied by the aforementioned hot garbage feeling made me realize, with real clarity "This is it. I know we said three, but I can't do this again." And her birth didn't change that feeling. It solidified it. Somehow, without speaking about it (rare for us) my husband reached the same conclusion.

So there we were with our family of four, vocally confident in our decision to remain so, shutting down anyone who asked when we were going to have another. Everything was perfect...

But as our daughter got older and the trials and tribulations of the infant and early toddler stage faded soft with nostalgia, that niggling doubt crept back in. "Well," I'd say to my husband, "I don't think I want to try for another baby... but if we had an 'oops' I think I'd eventually be happy about it." He began to feel the same way. "I feel like we just need to rent a baby for a little while," he said. "Like, if we could get some newborn time from somewhere it might scratch the itch."

On cue, a good friend of ours had a baby, and watching this beloved honorary niece made us realize... yeah, no, we're good. No. Really. This was great, we loved watching her, now please take her back home with you because we're exhausted and it's only been four hours, but you have to let us do this again soon because it was fun.

The doubt was squashed (thank you, Baby A) and the itch scratched. But... am I done wondering? I think so. I'm as sure as I've ever been, but who knows? I've been "sure" before. The best I can figure is that, generally, you know, but there's often some room for doubt that ebbs and flows and you just kind of trust the prevailing feeling and go with it.