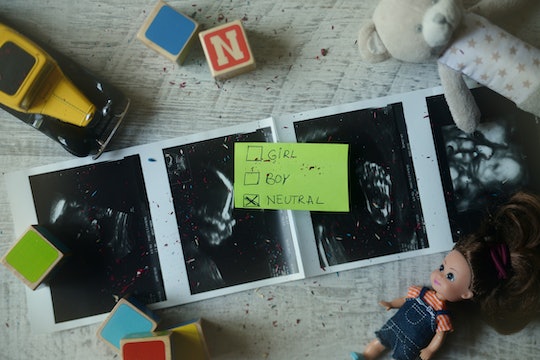 While I was pregnant, I made an effort to explain why my partner and I had decided to raise our future child in a genderless way. “What are you having?” people would ask, to which I’d reply, “Hopefully a healthy baby.” And as if I didn't know what they originally meant, they'd respond, "No, I mean are you having a boy or a girl?” I'd claim it was too soon to tell, hoping it would satisfy their curiosity and we could all move on. I didn't want to explain that I planned on raising a "theyby," and I certainly didn't want to list all the reasons why.

When I didn't answer the "gender question" during my pregnancy, most people just assumed I was waiting until my child was born to find out their biological sex. I wasn't, though. When I said it was "too soon to tell," I meant, “I’m waiting until my child is old enough to make sense of their gender identity and gender expression on their own, before I tell other people what their gender is.”

So, and until that day comes, I'm raising a "theyby" — a term Alex Morris eloquently described in The Cut as “babies whose parents [had] decided not to reveal their sex, who used they/them pronouns for their children, and whose goal was to create an early childhood free of gendered ideas of how a child should dress, act, play, and be."

Since pregnancy, I’ve been open and transparent about my plan to avoid gender roles and related frameworks for thinking and talking about young children. I would post articles and share personal testimonies about my own experiences as a someone who's nonbinary. Some family members understand that goal, and use they/them pronouns for our child. Some don't. All of my friends use they/them pronouns, though, and I’m appreciative.

But when it comes to strangers or people we aren’t super close to, things can get, shall we say, interesting.

However they identify when it comes to gender isn’t as important to me as their ability to be their own advocate and understand how social constructs impact their life.

When posting photos of or sharing stories about my child online, I’ve only ever used they/them pronouns to refer to them. What’s interesting is that even though that’s the case, people who have never met my child in person take it upon themselves to gender them. Some people use she/her pronouns, and some people use he/him pronouns. I don’t ever ask them to edit their comment or correct them, but I do respond using they/them pronouns in the hope that they'll pick up what I'm putting down.

It's not just other people, either. I find myself using traditional language to describe my child, even though my parenting style and philosophy is nontraditional. And whenever I use pronouns that aren’t they/them it feels like a reflex, and I’m reminded of just how deeply engrained ideas about gender really are, even in someone who is actively trying to disengage with and challenge these ideas.

Last week, the woman credited with inventing the “gender reveal party” made headlines by revealing that she now wishes people would stop throwing them. In a now-viral Facebook post, she said that gender reveal parties place “more emphasis on gender than has ever been necessary for a baby.” She went on to explain that focusing on gender so much from birth “leaves out so much of their potential and talents that have nothing to do with what’s between their legs.”

I’d rather my child learn their name and develop talents and passions in the most authentic way, free of the limitations of the gender binary. I'd rather let my child simply be.

The focus on children’s biological sex, particularly as it relates to what’s between their legs, is a topic that’s also under scrutiny by parents of intersex — having reproductive and sexual anatomy that doesn’t fit traditional definitions of male or female — babies. Up until as recently as the 1960s, parents and doctors of intersex children simply "picked" a sex for the child, then parented them based on the gender norms associated with that sex. This practice, according to the Human Rights Watch, often included medically unnecessary surgeries, so that the child's body would align with the gendered expectations assigned to them.

Gender reveal parties and surgeries performed on intersex children are part of a long list of things of things parents do to perpetuate gender norms. The latter is violent and can result in trauma for the child, and the former is a seemingly innocent party that doesn’t harm anyone physically (unless it's a gender reveal gone awry), but both highlight our society’s obsession with gender. It's the same obsession that leads to gendered clothes, gendered toys, "boys" aisles and "girl" aisles, and arbitrary "rules," like boys can't wear dresses and girls can't pretend to be doctors — everything I'm hoping to avoid by raising my "theyby."

I want my child to think critically and understand autonomy and consent and develop their own ideas about what happiness means to them. However they identify when it comes to gender isn’t as important to me as their ability to be their own advocate and understand how social constructs impact their life. I want them to like things because they like them, not because they think they’re supposed to as a result of their gender, or because of what reproductive organs they have.

So when it comes to things like pronouns and responding to strangers to say thing things like “she’s so pretty” or “he’s so handsome," I don’t spend much energy explaining that my child’s pronouns are they/them. I use my child’s name to describe them more than anything else, the people who spend the most time with them do the same, and I stay focused on the task at hand: raising a child to be free of a binary that would only stifle them.

My "theby" is only 9 months old, too, so it's easy to focus on things besides gender. I can assume, though, that as they get older it might not always be. But for the time being it's still relatively easy to find developmentally-appropriate toys for them to play with that aren't gendered, and pick clothes that fit them and are devoid of any gendered message. And until they’re old enough to make sense of what gender expression and identity even means, I won't spend too much time stressing over pronouns, even when someone gets them wrong.

I’d rather my child learn their name and develop talents and passions in the most authentic way, free of the limitations of the gender binary. I'd rather let my child simply be.