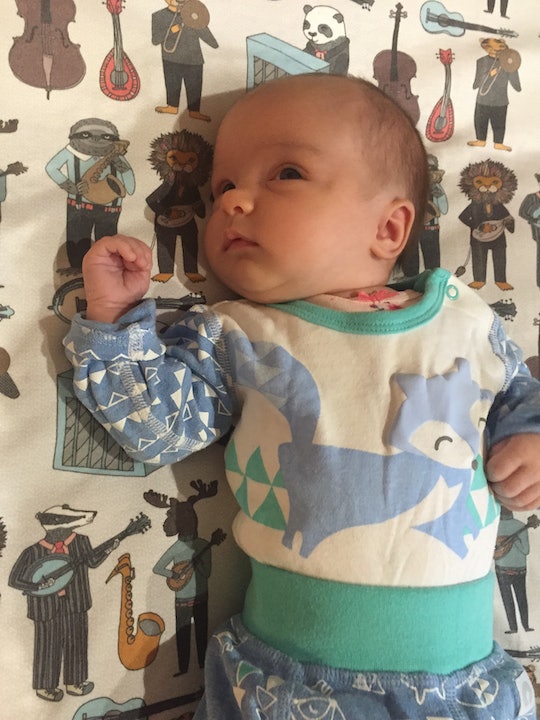 I'm Raising My Daughter Without The Gender Binary

As a pre-teen, my wardrobe consisted largely of my big brother's hand-me-downs and loose-fitting T-shirts from PacSun and the Billabong shop. I eschewed skirts for sweatpants and board shorts, and I wore my Converse with pride.

I was raised to adhere to the gender binary in the conventional sense of the term. I grew up believing that girls were meant to enjoy playing with dolls and wearing dresses, while boys could have fun with trucks and airplanes. In my mind, girls grew up to be homemakers, while boys grew up to become astronauts, businessmen, and general money-makers.

So it made sense why my 12-year-old self became something of a tomboy: it just seemed like a lot more fun. For years, my brother and I would play video games that targeted little boys, kick soccer balls marketed at boys, and collect miniature green military action figures made with boys in mind. I still remember my mom praying (like, literally praying to God) that He would help me become a lady.

As my newborn daughter Luna celebrates her 1-month birthday, I cannot help but wonder what "male" or "female" interests she might have someday. Will she like velvet skirts, or suspenders and denim dungarees? Will she prefer ballet or hockey? Will she want to be a pilot or a nurse? I'd like to think that socioculturally, we've moved beyond such dichotomies, and that she can like both or neither without facing any judgment. But I know that we haven't, not entirely. And while I know I cannot save Luna from being judged or facing others' assumptions based on her gender presentation, I do hope to raise her free of the gender binary in as many small ways as possible.

One crucial part of this mission will be allowing Luna to develop her own sense of style. As Luna grows up, I will become less involved in the selection of her wardrobe, but for the time being, my partner and I are calling the shots, and I hope to call them mindfully.

Before Luna was born, I curated shopping carts on BabiesRUs.com and Macy's filled with princess-like dresses and skirts. I imagined how fun it would be to put her in sparkly outfits and daydreamed about the day she'd want to play with makeup. But then something clicked, and I realized that I didn't want Luna to think that femininity or womanhood are limited to dainty dresses and frilly things.

I won't seek to define my daughter's style, because she's too young to have one. Instead, I'll help her wear anything and everything, until she's old enough to make these choices for herself.

While I would never want to correlate such aesthetics with weakness or fragility, I want Luna to know from a very young age that her femininity (or lack thereof) is for her to define. If I only dress her in pink and buy her dolls and prioritize Barbie over Bob the Builder, my actions won't be mirroring my goals. So I hope to put her in all kinds of clothing: sure, she'll wear dresses, but I also want her to wear items from the boys and unisex sections, such as suits, bowties, blues, baseball caps, and tartan rompers. I won't seek to define her style, because she's too young to have one. Instead, I'll help her wear anything and everything, until she's old enough to make these choices for herself.

The same goes for buying toys. Although I'd love to sit around and play dolls with Luna, I'd also love to introduce her to the wonders of transportation. We could play race games with trucks, airplanes, and cars. We could build all the Legos. We could play with my old-school Nintendo64, and we could kick around the soccer ball like my brother and I did a few decades ago. There won't be a toy or a game that's off-limits to her because of something as meaningless as a boy/girl tag. And while only time will tell what her interests are, she'll hopefully know beyond a doubt that her imagination and creativity and sense of exploration are limitless, and that there is nothing wrong with liking something that's supposedly "for the boys" if you're a girl.

But the gender binary is not only reinforced through clothing and toys. The way we absentmindedly speak to children can often reinforce societal definitions of "boy" and "girl." I still remember being a kid and constantly being asked by adults what I wanted to be when I grew up. Did I want to be a princess, a secretary, a nurse, a dancer, a schoolteacher?

My career goals shifted constantly, but if I told the adults I wanted to be a veterinarian or a scientist or a construction worker or even a writer, their shock was tangible. "A construction worker?" my grandmother once asked. "Wouldn't you rather be something that would allow you to wear something like this?" As she gestured to her vintage pencil dress, I could feel my stomach drop, along with all of my ambitions. And I don't want the same to happen to my own kid.

I want my kid to know that gender should never get in her way: that even if there is still a wage gap and rampant sexism in the workplace, she deserves to be all the things women once weren't allowed to be and more.

People critique members of my Millennial generation for having been taught that we can be anything and do anything our special snowflake hearts desire. But I hope to express to Luna that she can be anything she wants to be. I want my kid to know that gender should never get in her way: that even if there is still a wage gap and rampant sexism in the workplace, she deserves to be all the things women once weren't allowed to be and more. So I'll never ask her if she wants to be a princess or a nurse. Instead, I'll just let her tell me of her hopes and dreams and try my best not to put limitations on them.

What will perhaps be most difficult to teach her, however, is the simple fact that gender identity in and of itself is not "male versus female" at all. I am thankful that Luna will grow up during an era where terms like "non-binary," "genderqueer," "androgynous," and "gender non-conforming" are somewhat more mainstream than they were in decades past. But I am also saddened by the reality that even though these words are more mainstream, they are seemingly only mainstream in certain liberal, progressive circles.

I will tell Luna that not everyone identifies as a boy or a girl. I will tell her that how she identifies is her own choice, too, much like who she loves or likes or is attracted to is entirely her choice as well.

So when Luna is old enough to talk and have short conversations, I hope to introduce her to gender non-conforming individuals in the media. I will display inclusive artwork around my home, some of which celebrates people who are not masculine nor feminine. I will tell her that not everyone identifies as a boy or a girl. I will tell her that how she identifies is her own choice, too, much like who she loves or likes or is attracted to is entirely her call as well. I will bring her with me when I meet up with my LGBTQIA+ friends. I will reiterate that no one has to be just one thing.

While our culture of toxic masculinity still largely suggests that men are to be strong, emotionless, and career-oriented, I believe small actions can help shift the narrative while society slowly catches on. And it is catching on. When Star Wars: The Force Awakens premiered in Dec. 2015, I overheard a little girl no older than five telling her mom, "I'm not afraid of anything anymore because Rey isn't afraid of anything," after the film ended. "I can do anything, right?"

I trust that Luna will have strong female role models to look up to in film and TV who wouldn't have existed when my mom or grandma were kids. I trust that she'll see women who break the mold of womanhood. But I also trust that small behaviors in the household can make all the difference. If she is taught that men can wear skirts or grow their hair long or be ballerinas or have sensitive dispositions, and she knows that women can wear pants or cut their hair short or be loud and brash and fond of farting, then she will hopefully learn not to define people by their sex or gender identity or seek to put them into boxes. And with a bit of luck, she won't put herself into a box, either.