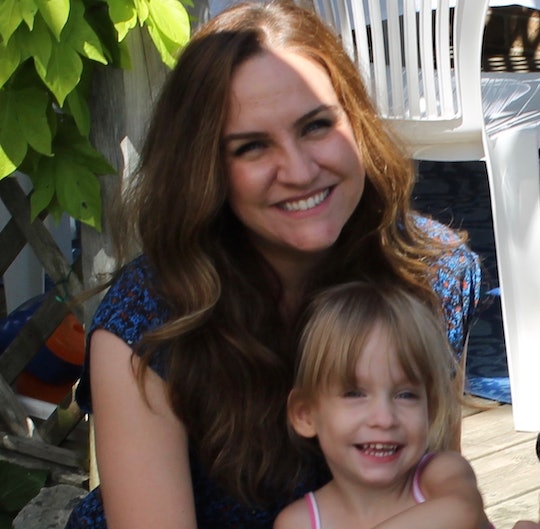 If I had to sum up my 3-year-old daughter in only a few words, it would be small, but mighty. She is a tiny, twig-like girl who loves to laugh and dance and skip and make up nonsense songs and pull funny faces to make you smile. She's also a warrior, a girl who in only three years has experienced more than many adults experience in their lifetimes. But even though I know what she's made of, even though I know how strong she is, I'm scared I won't be able to teach my daughter to stick up for herself as she grows up, and that is honestly something that keeps me awake at night.

Madeleine and her twin brother Reid were born extremely prematurely at 25 weeks gestation. Because she was born so early, she suffered a severe brain hemorrhage, and while some babies born that early are able to recover from hemorrhages like that without intervention, Madeleine was not. She quickly developed a condition called hydrocephalus, which required two brain surgeries to correct (all before she even reached her original due date). These days, Madeleine has a permanent shunt in her head, and wears a brace on her right leg due to mild cerebral palsy. She barely registers on the height and weight percentiles for her age group, and as a whole, has low muscle tone compared to most kids, which means she gets tired more easily, and has to exert far more energy to do the same tasks. She is clumsy, has seemingly-permanent skinned knees, and doesn't yet have the capacity to be potty trained because she doesn't have the muscular strength to hold her bladder and bowels. And yet, she's a total bad ass.

When Madeleine was a tiny infant in the NICU, when we first learned about some of the issues she was having, things didn't look all that great. As those issues progressed, we tried to adjust to the reality that, statistically, Madeleine probably wasn't going to walk away from all of this without some kind of lingering issue, and we knew that, statistically, that issue wasn't going to be something small. We didn't know if she would walk or talk or run or do all the other things we dreamed she might be able to do, and that was a difficult pill to swallow. But she did end up doing all of those things. I'm still not entirely sure how or why that happened, but honestly? The fact that it did seems like a whole lot of luck, and due to Madeleine just being so... Madeleine-y: stubborn, determined, fearless.

I could see Madeleine getting uncomfortable, and in my head I urged her to do what we had practiced. Say no, I thought to myself. C'mon Madeleine, you can say no.

But that doesn't mean I don't still worry a ton about what her life will be like. It doesn't mean I don't still feel anxious knowing that she and her brother will be starting school soon, as the youngest kids by a wide margin: as December babies who weren't even supposed to be born until March; as kids still in diapers; as kids smaller and (especially in Madeleine's case) weaker than everyone else. Madeleine will wear a brace on her leg, and have extra help, and will need extra assistance that she'll be eligible for because she has a disability. And that will mean she'll be different from the other kids. And "different" can often mean "picked on."

In our home, we talk a lot about consent and boundaries and respect, that you don't have the right to touch other people without asking, and that you have to listen to them when they say no. Those boundary rules also extend to your own bodies, I explain, and if you don't want to play with someone or if you don't want them to touch you or you just don't feel safe or OK, it is absolutely your right to say NO (the louder the better!). My husband and I teach our children that it's not OK to hit or bite or hurt other people, but saying no is totally fine, and there is zero shame in doing it.

As I was helping to wrangle hats and swim trunks and towels and antsy preschoolers, I saw out of the corner of my eye a boy coming up to Madeleine and trying to tickle her.

Up until recently, I thought this lesson had sunk in pretty well. Madeleine and Reid are now pretty good at setting boundaries when they play — at saying no when they don't want to play or be hugged or touched or whatever, and accepting that answer (albeit often begrudgingly) when it's declared. Madeleine's size and disability might make her more of a target for playground bullies one day, but between her natural sass and all the times we'd practiced saying no and "using our words," I really thought she had the assertiveness thing down.

But one day not too long ago, I dropped Madeleine off at daycare a little bit later in the morning after I'd taken her to her regular physiotherapy appointment. The teacher was trying to get the kids sunscreened and in bathing suits for outdoor water play, so I stuck around to offer an extra set of hands (even getting my own two kids ready to go outside is exhausting, so helping out was the least I could do). As I was helping to wrangle hats and swim trunks and towels and antsy preschoolers, I saw out of the corner of my eye a boy coming up to Madeleine and trying to tickle her. He was in the same class as she was, and was the same age, but was much bigger, and even though I could tell he was just playing, it made me feel kind of uneasy. As I watched, trying to keep the world's most neutral facial expression of life, I could see Madeleine getting uncomfortable, and in my head I urged her to do what we had practiced. Say no, I thought to myself. C'mon Madeleine, you can say no.

But she didn't say no. She didn't say anything. She stood there, nervously, and after a few seconds, blurted out, "you can tickle Reid!" (Way to throw your brother under the bus!). It wasn't her fault, of course, that she didn't stand her ground, and it wasn't even the other kid's fault for making her uncomfortable. It was hardly that big a deal in the grand scheme of things. Eventually, I just gently reminded them both that it didn't look like Madeleine wanted to be tickled, and oh hey, look, it's time to go outside, and then all was well. I'm certain they've since both forgotten about this interaction. But I haven't.

I know this will not even sort of be the only time that Madeleine will have to stick up for herself. I too was once a tiny, little girl, and I too know that sometimes bigger boys like to pick on tiny, little girls. I also know that, in general, being in possession of a vagina will mean she'll always have to navigate the ever-present threat of others who are bigger and stronger and who feel entitled to saying or doing whatever they'd like in her presence. And in those moments, I want her to feel confident saying no, feel confident respecting her own feelings and setting her own boundaries. I want her to remember the conversations her mother has been having with her since she was a very young child, and I want her to know that she is absolutely, unequivocally doing the right thing. But will she? Can she?

The hard part — the brutal truth — is that trying to convince myself that I control it or keep it from happening is a total myth, the same way that I couldn't control whether she lived or died, was born too soon, needed surgery, or would one day walk and talk.

The hard truth, as her mother, is that the answer might actually be no. As one of the primary people shaping her life, I'd like to think that all I have to do to keep my daughter safe is to teach her to put her foot down, to be assertive, to know her value and the fact that no one has any right to push her around. But I also know that there is way more to it than that. I also know that, as someone who is also in possession of a vagina, there are plenty of situations where I myself am unable to stick up for myself, where I feel as though it is best to be as unassuming and agreeable as possible. Times when I don't feel comfortable shouting No! the way I've taught her to, and times when, honestly, I know deep down that it wouldn't even matter if I did.

I know that right now it's just kindergarten. I know right now it's just well-meaning kids who don't know any better, and that my own fears far outweigh any actual threat. It's also entirely possible that Madeleine won't get picked on, or that she'll be just fine holding her own despite that uneasy moment I witnessed at daycare. But the hard part — the brutal truth — is that trying to convince myself that I control it or keep it from happening is a total myth, the same way that I couldn't control whether she lived or died, was born too soon, needed surgery, or would one day walk and talk.

As her mother, I desperately want to "bully-proof" Madeleine, to encapsulate her in a soft bubble of safety and love that no other child can penetrate. But I can't; none of us can. And, these days, I'm finding that a really difficult reality to live with.