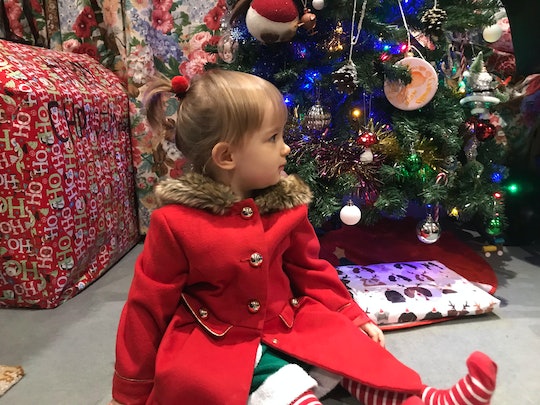 I'm Sorry I Judged You & Your Fancy Christmas Outfits

I never really understood parents who chose to dress children up for the holidays. If I'm honest, I never really understood parents who chose to dress their children up ever. Putting babies or young toddlers into tulle skirts, miniature suits and bowties, frilly gowns, or styles comparable to those found in A Little Princess seemed, to me, a surefire way to turn those kids into dolls — into little playthings, rather than future autonomous beings. As children grow, life will be sure to throw them countless dress codes, both official ones as well as unspoken social standards of aesthetic presentation. Why would parents actively choose to create even more dress codes so early on?

That said, I actually find a lot of joy in dressing up now that I'm an adult. Some days, I might put on a fancy maxi just to hit the local grocery store. Others, I'll rock a velvet blazer and matching pant, only to work from my desk at home. This wasn't always the case, though. I remember being 5, 7, and maybe even 12: a period of time before I was allowed to choose my own clothing. My parents put me into all manner of dressed-up wears, especially on holidays or special occasions. I found these garments terribly uncomfortable. They were itchy barriers that made it difficult to sit cross-legged on the floor, or to run outside freely with the family dog. Tartan skirts and gold-colored embellished hats just didn't feel like "me" at all. I wouldn't want to rid my own child of the fulfillment that is being allowed to simply feel like oneself.

Then I actually had my own children. I still maintain some of these opinions. I'd like to think that if my kids ever directly tell me that they don't want to wear something I've picked out, I will understand and find them something more comfortable. Right now, though, my children can't tell me that. At 2 years old and 5 months old, they don't yet have a strong sense of self, let alone a sense of style that is independent from the one I curate for them. As a result, I've found myself dressing them both up for the holidays this year — fancy wool coats, elf-inspired dresses, and cheerful onesies all included. I've also found myself feeling deeply apologetic to all the parents I may have once judged for doing the same.

There are a few reasons for my change of heart. The first is that I do still maintain a desire to allow my girls to develop their own sense of self, including their own sense of style. I have no doubt that their aesthetics will change a dozen times or more throughout their lifetimes, but I want them to experiment with as many looks as they so desire. Part of that means actively introducing them to all manner of candidates.

When my eldest was born, we brought her home to a wardrobe filled with pieces from both the boys and girls sections of our favorite children's stores. We dressed her in blues and greens, in pinks and purples, and in grays, blacks, and whites. We dressed her in bowties and trousers that made folks come up and tell us how precious our "little boy" was. We dressed her in skirts that most people would definitely associate with little girls.

Between us, though, we committed to framing clothing as a gender neutral experience. We want our daughters to grow up understanding that it is within their right to dress in traditionally masculine clothing, traditionally feminine clothing, or anything else that brings them joy. Part of this is allowing both our girls to experience fancy outfits, too, and what better time to do so than the season of glitter and snow?

In truth, my husband and I also hope to de-stigmatize femininity in the household. So many thing historically considered "girly," be it lipstick, or nail polish, or sequins, are often deemed frivolous and vapid. The story of Elle Woods in Legally Blonde has become iconic to many contemporary feminists for a reason. Woods wasn't taken seriously at Harvard Law due to her love of the color pink, her interest in fashion, and her generally upbeat disposition, when in reality she was just as competent and clever as anyone there.

I don't want my own children to mock femininity. I don't want them to laugh at "girly" things or to treat "girly" people as inferior. I don't want them to turn their noses up at fashion or beauty, as if these outlets (despite their room for improvement) do not offer creative expression to the multitudes. They may someday reject traditional femininity (and things like the leopard print-hooded coat I dressed my eldest in this year along with it). In the meantime, however, I want to expose them to little things like dressing up so that they may learn there is nothing inherently wrong with doing so.

Sociopolitical intentions aside, there is a more immediate reason I dress my kids up sometimes. Quite frankly, it's just fun. I cannot say the same about every element of having two daughters under 2. Some days, everything seems to go wrong. The little one will poop through all her clothes and bedding first thing in the morning while the big one throws her breakfast onto the dirty floor. My eldest will bite her sister's toe, or my youngest will scratch her sister's cheek. They will cry endlessly, for no discernible reason at all, until eventually I cannot help but join in. We will sit there, crying, amidst dishes that haven't been washed in days and piles of toys that haven't been picked up in even longer.

I have found it beyond helpful to try to create, or seize, moments of joy whenever possible, and particularly during the hard days. It's crucial to have a constant: a small thing that you know beyond a doubt will bring a smile to your face, no matter how many disasters are going down around you. For me, the constant has become dressing the girls each morning. I don't always dress them "up," but I do always dress them in outfits that make me happy.

I try to remember that these outfits won't always make them happy, and that someday they will tell me as much, and that someday I'll have to let them take control of their own morning routines. But for now, it's up to me to get them bathed and clothed each day. Sometimes, that's just going to mean breaking out the glittery Christmas pants.