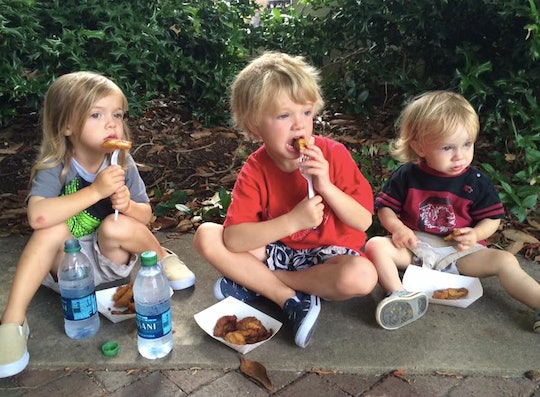 “No!” I yell. “How many times have I told you not to jump on my freaking bed?!” My 6 year old stops bouncing. “Sorry, mama,” he says. But he doesn’t move. “Get off!" I scream. "Go make a bed fort or something! Go jump on your own bed!” Blaise bounces to the end of the bed and slides off. I feel as if something cracks somewhere around my skull. “DO NOT BOUNCE ON MY BED!” I scream, and he walks out. From this exchange, you'd never know that I spent years breastfeeding, cuddling, and nurturing him. My kids are all attachment-parent babies, and as they get older, I'm struggling to attachment parent my growing kids. From the minute they were born, they were all breastfed, worn constantly, and never allowed to cry it out. My husband and I made sure their needs immediately met. They self-weaned, and my almost-3-year-old son hasn’t stopped yet. They all still co-sleep: my 4- and 6-year-old sons with my husband on one side of the enormous bed, the "baby" (who's nearing 3) with me on the other. My sons are all the textbook attached children. Martha Sears would be proud.

But now that they’re older, it's been really hard for me to transfer the attachment-parenting principles to my growing boys. You can’t meet all their needs on demand, because sometimes, what they think are needs aren’t needs at all, like my 2-and-half year old "needing" to play with every toy his brother has. And it’s much harder, for me, at least, to keep calm in the face of the storm. Screaming baby? No problem: the answer is to breastfeed. When they were smaller, the answer was always to breastfeed, or maybe to be wrapped up on my back and bounced. But now, the answers aren’t so simple.

I never got mad at my babies; their needs were so simple. But now my kids have wants, which clash with my wants and sometimes needs, and everything goes to hell.

Take, for example, this scenario: My 4-year-old son is top-of-his-lungs screaming because the baby, Sunny, age 2-and-half, has a UV light pen that came in a box for 6-year-old Blaise, and should by all rights belong to him. The only problem, however, is that 4-year-old August won’t stop screaming for it. He keeps trying to attack Sunny. In response, Blaise has vacated the scene. Meanwhile, Sunny refuses to give up the pen, and who can blame him? He’s 2, and we don’t force our children to share. But the yelling quickly gives me a headache. I intervene insofar as to keep August from hurting Sunny, and to tell August that he can play with the pen when Sunny is done. The screaming, however, continues. Years earlier, the problem would've been so much easier to solve.

I also yell now. I never yelled before, and yelling is so not part of the attachment-parenting pillsars. But when you ask your kid to put their shoes on approximately six times, then get out the door only to hear them say, like a revelation, “I forgot to put my shoes on!” well, it gets old. It’s hard not to yell, even when you know said child has ADHD, and even when you know it accomplishes nothing. I yell because I’m freaking mad. I never got mad at my babies; their needs were so simple. But now my kids have wants, which clash with my wants and sometimes needs, and everything goes to hell.

I struggle to be the kind of attachment parent I used to be. It’s easier to get angry at kids than it is at a baby.

I try to use the attachment parenting (AP) principles when they tantrum. I know that they can’t reason or focus on anything other than their raw emotion, so I go through the hungry-thirsty-tired list (which is ultimately how I saved August from the pen debacle). If all of those needs have already been met, I ask if they want to be sad alone or with me. Usually they say they want to be sad with me, so I cuddle them until they can calm down. But this schema isn’t automatic. And it’s super hard to remember when my kid is screaming and my head is hurting and I just want him to shut up.

It used to be that getting out the door was, well, if not easy, at least all on me. Now my kids share some responsibility for it, and when I’m calling them to the bathroom to get their hair done, and they’re ignoring me in favor of Tumble Leaf, that gets frustrating, and it’s hard not to yell. Or scream. Or threaten to take away their toys. Sometimes it seems they only listen if I threaten to take away something they love. If I followed the attachment-parenting way, I'd have to physically propel them in the direction that I need them to go, and smile while I do it. But, damn it, that’s really, really, really hard.

So I struggle to be the kind of attachment parent I used to be. It’s easier to get angry at kids than it is at a baby. Breastfeeding no longer solves everything. We don’t cuddle as often, though they’re quick to pile on top of me whenever I sit down on the couch. And even though we still co-sleep, there’s a lot more kicking and a lot less cuddling. I yell — because they make me angry, and in the moment, I can’t think of another alternative. It was nice when the alternatives were simpler. Breastfeed? Diaper change? Wrap? Problem solved. But this whole AP thing gets a lot harder as my boys get older. It’s a lot more work to implement. But I’m trying. I’m trying. And I have to remember that's what counts.