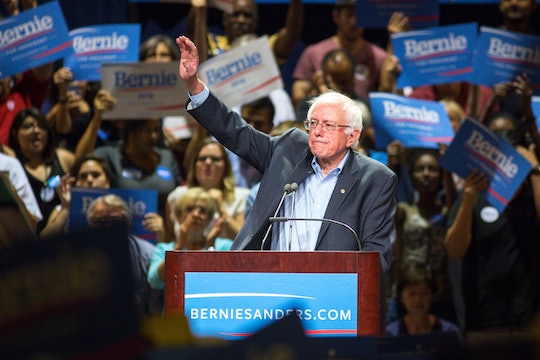 I have been deeply interested in politics ever since I’ve been able to vote. I enjoyed the rush of living in a swing state and having candidates visit my college campus regularly during election cycles. I saw then-Illinois Senator Obama in the flesh before he was elected president, when all the excitement and whispers of “could this really happen?” were swirling around in the air. There was truly a feeling of hope and purpose when I cast my vote. An inkling of celebration lay in my heart that I may be a part of something bigger than myself. The democratic process thrilled me.

Recently though, I’ve been feeling that early collegiate excitement for politics again, but bigger and better and Bernier. My passion for the political scene is reemerging for the unlikely underdog who believes in the democratic process the way I want to believe in it. Which is to say, I am feeling the Bern. In 2016 I'm voting for Bernie Sanders, because he's the candidate I believe has my kids best interests at heart. Though Sanders has been in the press lately, my decision to vote for him has nothing to do with wanting to meet men. Gloria Steinem recently suggested that women voting for Bernie are doing so "for the boys" on Bill Maher's Real Time with Bill Maher show. (She's since clarified those comments and apologized.) Of women, she told Maher:

They're going to get more activist as they grow older. And when you're younger, you think: 'Where are the boys? The boys are with Bernie.'

Yet that has absolutely nothing to do with my decision to vote for the person I feel is the most qualified, most feminist, most promising candidate who'll not only offer my children the future they'll need, he'll give them the one they deserve.

Soon after my love of politics first emerged in college, I found myself disillusioned. My vote, which had once seemed so important and so wholehearted, became a reluctant lesser-of-two-evils pick. The debates were tiresome. The politicians visiting campus skirted questions. The issues I cared about were glossed over, ignored, and met with half-hearted lies from both sides. For a while, I wanted desperately to see change in politics, but by the time I had settled into my adult life with kids, I barely wanted to tune in anymore. It all felt so pointless. These days, though, I no longer feel that way.

In 2016, my need to vote has returned with a vengeance. I see a future I believe in, one I want for my kids, and I see it with Sanders at its helm.

It’s hard to completely turn away from the disdain I’ve grown to have toward politics in general, but Sanders is a compelling enough character to rouse my attention in a way I haven’t felt for a long while. He’s a politician who doesn’t lie, whose track record doesn’t waver, and he isn’t afraid to answer questions in a straightforward matter. (In fact, Sanders doesn't ever shy away from honesty.) He isn’t bought and paid for in the way that other politicians are. He believes in what he’s saying. He believes in the future of our country. It’s bold, and kind of insane, and I love it.

Not only would my daughter be able to ease into motherhood without worrying over her job security and dealing with financial stress of saving like crazy to take a couple measly weeks off from work, but my sons would be able to do the same with their families. They would have paid sick days so they could take care of sick kids rather than sending them to school loaded on Tylenol or risk their jobs by taking a day off.

No matter what he says, whether I agree with him or not, I believe him. He is passionately earnest, which makes the future he envisions even more enticing. It’s the sort of future I’d want for my children if I was crazy enough to believe in it. On February 9 he'll have an honest chance at snagging the New Hampshire from Hillary Clinton, and that's important for a number of reasons.

According to Bustle's Morgan Brinlee, the New Hampshire primary "forces candidates to put aside overgeneralized campaign slogans like 'Make America Great Again' and talk directly with voters about issues that matter to them (even if those issues don't exactly align with what the majority of U.S. voters care about). You can't win New Hampshire without shaking a few hands and ringing a few doorbells, and this sets an important precedent for election season by encouraging candidates to engage and interact with voters." And because Bernie isn't interested in big-money backers, a win in New Hampshire tonight would be incredibly interesting to watch.

If Bernie Sanders had his way, Wall Street would pay for public college instead of having another generation plunged into crippling debt. While I’m trying desperately to save money to put my three kids through college, there’s a large gap between the place where our ends meet that’s currently filled with prayers and tears. I can’t imagine the relief that would wash over millions of families — my own included — if the burden of paying for higher education (and preschool for that matter) was lifted from their shoulders.

There would be mandatory paid 12-week family leave. Not only would my daughter be able to ease into motherhood without worrying over her job security and dealing with financial stress of saving like crazy to take a couple measly weeks off from work, but my sons would be able to do the same with their families. They would have paid sick days so they could take care of sick kids rather than sending them to school loaded on Tylenol or risk their jobs by taking a day off.

The future Bernie Sanders envisions may seem like a long shot to some, but it's a distance that shortens by the day.

My daughter’s reproductive health would no longer be the subject of national debate. Personal medical decisions would be made between her and her doctor. If, god forbid, she ever had a miscarriage and wanted to have a dilation and evacuation like I did, there would be no one trying to stand in her way, telling her she’s killing her baby when it’s already dead.

The future Bernie Sanders envisions may seem like a long shot to some, but it's a distance that shortens by the day. The fact that he has gotten this far and has triumphed so much in a political gauntlet devised to ostracize any trace of authenticity is a testament that you should dream the big dream. So I’ll dream along with Bernie as long as I can. It’s the kind of future our kids deserve.