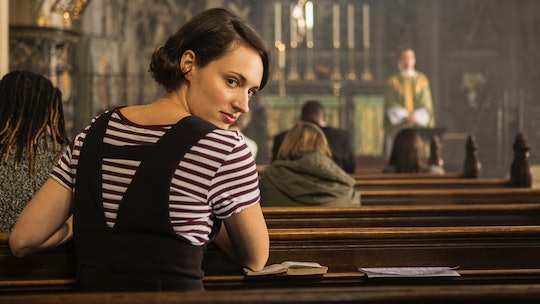 Just when you didn't think Fleabag's life could get any messier, the second season of Fleabag opens on Phoebe Waller Bridge's character dabbing at a bloody nose. Looking in the mirror at us, behind the camera, she says she's been doing "all the things" to improve herself — bootcamps, avoiding random sexual encounters, eating microgreens on rice crackers — and yet we know from the outset that it's never that simple. We don't expect a couple of squats or a commitment to "positivity" to restore our lives to shiny and simple, and we don't expect that of Fleabag — that's why she's been so important, so relatable.

At the end of six episodes, Phoebe Waller-Bridge walks away from the camera, with a wry shake of Fleabag’s signature bob. The grieving begins. She won’t let her audience follow her. In a series where the constant breakdown of the fourth wall has become a plot point in itself, audiences recognize that this a choice she had to make. Just as Fleabag realized in the first season that she was using sex to escape her problems and that personal growth would mean taking a temporary vow of celibacy, the tragedy of the second season is when she recognizes that she has been using the audience in a similar way.

“What is that thing you’re doing? It’s like you disappear,” Andrew Scott’s Hot Priest asks with disconcerting insight after Fleabag directly includes the audience in her thoughts. We realize alongside our troubled leading lady — and with the help of a sexy spiritual guide — that we aren’t good for her. After all, her constant self-narration echoes the broader expectation that most women feel to justify, apologize, and seek outside validation for our behavior. In order to grow, Fleabag has to walk away from us. And that’s what we want for her, right? Growth?

But perhaps the real takeaway from season two of Fleabag is what a necessary ingredient complicated female characters like Fleabag are to in a healthy entertainment diet. As the duo at the heart of Netflix’s recent series Dead to Me has made clear (played by Christina Applegate and Linda Cardellini), we love a bad girl and not a hot-mess-damsel-in-distress-male-fantasy bad girl. From the unapologetic wolf-pack in Big Little Lies to the struggling women of Workin' Moms, audiences are embracing women with rage issues, addictions, sub-par parenting skills, and low impulse control.

The frankness of these perspectives go beyond our traditional heroine's motivations, burrowing into impulses we don't always acknowledge in ourselves.

It's obvious why we are seeing more of these shows. We enjoy complicated characters because we are complicated. We enjoy characters who self-sabotage because we self-sabotage. We see ourselves in stories of addiction and rage. The stigma of our most shameful experiences is diminished when we see it on our screens. “I’m okay,” we think, “I’m not alone.” And perhaps, "I, too, have thought about f*cking a priest!"

But I think there is more to the recent trend of messy heroines than our ability to identify with them. Like Fleabag, I have struggled to overcome childhood resentments with my sister, but I’ve never punched her in the face when she tried to hug me. Maybe I've thought about seducing a priest, but I've never actually done it. The rules of drama dictate that our character’s issues are extraordinary, so even realistic TV shows rarely sum up a day in the typical life. And that's okay, because we need complicated heroines for more than their ability to make us feel normal in our struggles. We need them because watching messed up women overcome their problems is inspirational in a way that watching a morally sound character who always manages to solve her problems in exactly 30 minutes, simply isn’t.

When a leading businesswoman, Belinda, played by Kristin Scott Thomas, talks to Fleabag about how it feels to walk into a room and feel the energy of serious flirtation that is almost "a dare," we are reminded of the explanation Fleabag gave for her obsession with sex back in season one, "The performance of it... the drama of it." The frankness of these perspectives go beyond our traditional heroine's motivations, burrowing into impulses we don't always acknowledge in ourselves. Watching these character's own their desires is empowering, even as they struggle with setbacks and disappointment.

As Fleabag greets the audience with her first cynical smile at the beginning of season two, informing us that “this is a love story,” it’s hard to believe. Despite all the sex, love, and heartbreak of season one, it was certainly not a romance. But as I burned through all six of the much-too-brief episodes of the second season, it became clear that she wasn’t being facetious. This was a love story.

Phoebe Waller-Bridge’s vulnerable portrayal of Fleabag that stole my heart.

This concerned me a bit, I couldn’t bear to watch the complicated character study of an emotional basket case turn into a saccharine romance. However, by the time Fleabag walked out of the final frame, I had been more than convinced — I had fallen in love myself. And not with the Hot Priest, despite Andrew Scott’s incredible smile and “lovely neck”; it was Phoebe Waller-Bridge’s vulnerable portrayal of Fleabag that stole my heart. I realized I didn’t see myself in this character so much as I wanted to be her.

Wanting to emulate a character whose life doesn't have any of the traditional markers of success may seem counter-intuitive. Fleabag has lost her best friend and her mother, she can't hold down a stable relationship, and comes into season two having gone over a year without speaking to the family she has left. This is not a life one typically aspires to recreate. And yet, it is her lost, broken, and difficult relationships that are the catalyst for Fleabag's ultimate triumph as a leading lady. For me, watching Fleabag navigate her relationships with her dysfunctional family, her repugnant brother-in-law, and the Hot Priest with confidence and complete fidelity to herself, made for a truly compelling ideal.

Fleabag messes up over and over, in ways we may or may not relate to, but as she shakes her head and exits our lives for good, she leaves us with a single, profound understanding: resilience is everything. And after watching her story, we realize that we can have it too.