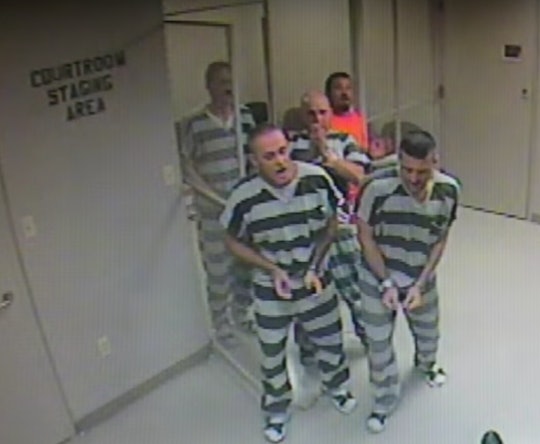 When Texas inmate Nick Kelton saw a jailer whom he considers a "good man" slump over in front of his holding cell, it never occurred him him not to help. Along with the other inmates with whom the guard had been joking just moments prior to suffering an apparent heart attack, Kelton did just that. The self-described meth addict made the decision to become one of the inmates who saved the guard's life by breaking out of their shared cell and making enough noise to alert officials to what could have been a deadly situation, local ABC affiliate WFAA reported recently.

The incident actually went down on June 23, but media outlets learned of it a full two weeks later, when the Parker County jail publicized the raw footage of the approximately eight shackled inmates busting out of a holding cell and rushing toward the armed guard, many of them in black-and-white-striped jumpsuits. Their intentions were anything but nefarious, although they're well aware of how the situation could have been perceived.

"They thought it was a fight," inmate Floyd Smith told WFAA about the moment when the inmates made enough noise by screaming and banging on doors to attract deputies from elsewhere in the jail. "They thought we were taking over."

Parker County Sheriff’s Sgt. Ryan Speegle agreed that "it could have been an extremely bad situation." The guard who was alone with the inmate in the holding cell had both keys and a gun. But when the inmates reached him, what he didn't have was a pulse. And that was enough for Kelton, Smith, and the others to take their chances that deputies would misinterpret what was going on. It was, after all, an incredibly chaotic scene.

One of the inmates grabbed the fallen guard's radio, which was near his gun, meaning to try to use it to call for help from the basement of the Weatherford District Courts Building, where they were waiting to appear in court, NBC News reported.

"We were worried they're going to come with guns drawn on us," Kelton told WFAA. Instead, deputies who were initially confused corralled the inmates back into their cell, and emergency personnel who arrived soon after performed CPR on the as-yet unidentified jailer and used a defibrillator to shock his heart. He'll return to work on Monday.

Last week was an absolutely devastating one nationwide, with separate officer-involved shootings of two black men in Louisiana and Minnesota and the sniper attack that left five officers dead at an ensuing rally in Dallas. Information about the inmates' heroics emerged in the midst of all that heartbreak.

The incident may not help to address the racial tension between Americans of color and police, or make the loss of all the seven men who died as a result any easier to bear. But it does show us that there is love and compassion and selflessness in the world, and that's a reminder we could all use.