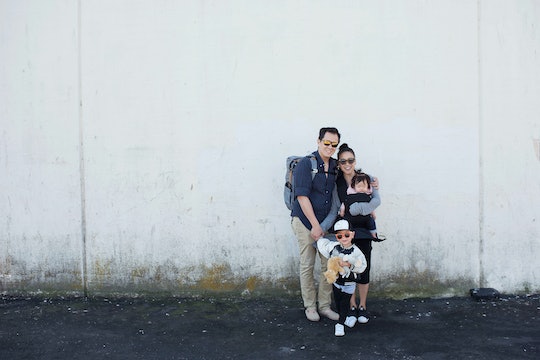 Kids have a way of serving as a wake up call to your priorities. Becoming a mother means learning how to streamline your schedule, saying "no" to the things that you just can't with, and even taking the plunge on ideas you've been putting on the back-burner for far too long. At least, that was the case for Irene Lee, founder and creative director of Bash + Sass, a gender neutral kids clothing brand created for the “little minimalist” ages 6 months to 4 years old. The birth of her son, Sebastian, lit a fire for the former e-commerce veteran and led her to create the line, earning her a spot as one of Romper's first-ever Made It Awards honorees.

“Becoming a mama really pushed me to make the jump," Lee noted on her site. "I left the corporate world to carve a new career path allowing me the flexibility to spend time with my growing family. I wanted to do something creative on my own that I felt passionate about."

That enthusiasm was filtered into Bash + Sass, which was inspired by a friendship between Sebastian (also known as “Bash") and his best friend Saskia (also known as “Sass"). "They were born just days apart and inseparable for their first year of life — it was the 'Bash + Sass' show," Lee tells Romper. "I knew I wanted the line to be gender neutral, so mixing in his name with hers was a perfect pairing."

Bash + Sass sustainably manufactures and sources their fabrics locally, and the collections feature quality, year-round modern basics made to reflect each child’s individuality and style.

"I wanted to add something fun and unique to the line that would separate Bash + Sass from other brands doing simple styles," Lee says. "Aside from including edgy details (e.g. asymmetric hems, thumb holes), I thought it would be fun to introduce a playful character with each collection, too." The clothing line currently features monsters, which Lee says are a direct nod to the "little personalities" of now 4-year-old Sebastian and her newborn daughter Isa. "I'm fine-tuning the next one now and it makes me smile so big just thinking about how they each represent a little piece of my kids," she says.

Lee says the want for a gender neutral line stemmed from her "pretty painful" experiences when shopping for clothing for her son. "I didn’t want to buy things covered in cars and trains," she says. "It was difficult to find comfortable pieces that were simple and minimal in design." With that in mind, she says she designed minimalist pieces that she knew would not only suit her son, but a future daughter, or any girl for that matter. "My own style is minimalist so it came natural for me to translate that into smaller sized pieces," Lee says. "Now that I have a boy and a girl, I’m excited they both can wear the collections."

Lee says her recent attendance at the In Good Company conference in San Francisco, California, helped shape her entrepreneurial perspective even more. She had a chance to see a mother speak who is raising a gender neutral child and it was when she mother said, "Who am I to question anyone’s identity, even my own kid's?" that Lee felt especially inspired.

"I think a lot of the [gender neutral] controversy stems from the fear of what you don’t know and lack of education and exposure to communities that embrace gender neutrality," she says.

As for balancing motherhood and her business, Lee says one of the biggest adjustments she has had to make was eschewing the notion that she can be everything to everyone. "Motherhood has forced me to be more organized, efficient, and plan ahead whenever possible," she says. "I’ve learned to let the little things go because I simply don’t have the time or energy for it — and really, it’s probably not worth it anyways."

Because every mama knows the importance of priorities, right?

Get to know Lee better by checking out her Romper Screenshot below:

More Like This
Celebrate Your Kid With These Cool Preschool Graduation Gifts
12 Genius Floats With Canopies (& Cupholders), So You Never Have To Leave The Pool
Ashley Graham On The “Fun, Organized Chaos” Of Raising Twins
These Stepmother's Day Instagram Captions Are Straight From The Heart