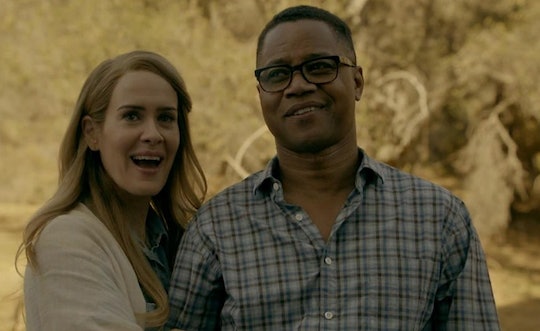 Is ‘American Horror Story: My Roanoke Nightmare’ Based On A True Story? The Title Says So

We waited months to find out the theme of Season 6 of American Horror Story and even when the description and title of the first episode were available, both simply said "Chapter 1," which continued to give us nothing to go on. But after the first episode Wednesday night, it's safe to say that it would have been hard to prepare us for the story and format. But is American Horror Story: My Roanoke Nightmare based on a true story? The title card at the very beginning of the episode said that the story the characters were about to tell was "based on true events," but even in real life, we know to take that with the tiniest grain of salt. (Romper reached out regarding the validity of the concept, but did not hear back at the time of publication.)

The exact story so far this season — one could presume based on the concept of the show — does not seem to be based on a true story, despite the title card. Instead, the title card seems to perhaps speak more towards the documentary that the show is creating within the show. Plus, the idea behind this feeling real definitely adds some thrill factor to the show. Like, so much thrill you want to keep your bedside lamp on all night, despite the fact that the bulb is too bright and there are still some unknown shadows in your bedroom.

American Horror Story: My Roanoke Nightmare is not based on true events, but there's a reason why this season takes place in Virginia. Among all of the wild fan theories trying to guess the theme of Season 6 of American Horror Story, there was some talk of Murphy basing the season off a mysterious historical event and while this isn't exactly what it means, there is plenty of real life mystery surrounding Roanoke today that means the story of Shelby and Matt is a way to introduce us to it.

Back in the 1500s, Roanoke Colony settled right around where Dare County is today in North Carolina, near the northern part of the state, along the coast. So, not very far from Virginia. The story of the Lost Colony goes that a group of more than 100 English settlers arrived on the island to build a village but shortly after, John White, the colony's governor, sailed back to England for supplies. When he returned to England, though, a car has broken out between England and Spain, effectively stranding him in England for the next few years. When he finally made his way back to Roanoke, he found no trace of his fellow villagers or that anyone had lived there at all. Instead, there was just the word "Croatoan" carved into a post and "CRO" into a tree.

Croatoan was actually the name of a nearby island that was said to be the home of Native Americas, so it has been theorized that the settlers met their deaths at the hands of an angry tribe, but there have been other theories as to what happened to the Lost Colony of Roanoke, according to The Outer Banks of North Carolina's website. They may have tried to sail back to England themselves, as White had, and were killed by opposing Spaniards in the battle. Or, they attempted to move their colony further inland and settled somewhere there. But before White could try to find his family and the other settlers, a hurricane swept in, forcing him and his ship back to England.

Today, the mystery surrounding the Lost Colony and Roanoke remains, as does whatever happened to the English settlers. Which brings us back to American Horror Story: My Roanoke Nightmare. In the first episode, we see Shelby terrorized by people holding torches and when she's being held underwater in the hot tub, you can vaguely make out their 16th century clothing. The same thing happens when she hits the woman in the road (Kathy Bates) and then follows her into the woods.

So while American Horror Story: My Roanoke Nightmare probably isn't based on the true story of a couple being terrorized by mysterious spirits, it's obviously touching on an unsolved mystery of the colony's disappearance so many years ago.