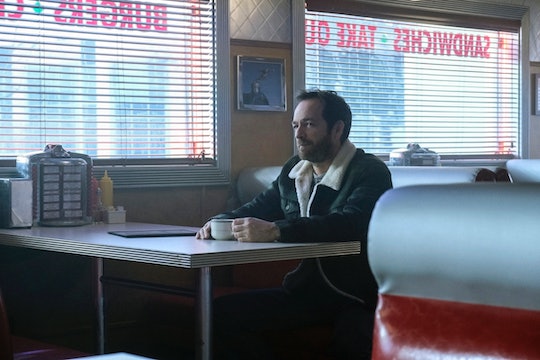 Archie's Dad May Face A Grim Fate On 'Riverdale'

Much like the teen soap opera that it is (and that I love), Riverdale’s new question of the season is, who shot Fred Andrews? In the show’s first season, the big mystery centered around who killed Jason Blossom which, as we all found out, turned out to be his own father. But with a new season comes a brand new mystery and, more important than anything else, fans are wondering: is Archie’s dad dead on Riverdale? Fred Andrews’ fate is still uncertain, but there’s definitely hope.

For one, the adults on Riverdale, unlike other teen dramas of the past, are very present in the lives of their children and seem to have a collective past of their own. With the death of Clifford Blossom already behind us, I don’t see another character’s dad dying off so quickly. There’s also the fact that Archie’s dad was in one of the Riverdale Season 2 trailers. And although he was in a hospital, possibly in an operating room, they wouldn’t have brought him back just to officially kill him off in the season premiere.

Plus, according to IMDB, the actor who plays Fred, Luke Perry, is set to appear in several episodes throughout Season 2 of Riverdale. In a promo, you see Archie call his mom with the news that they’re "in trouble," but I have faith that it’s just the news that Fred was shot rather than that he actually died. Or at least I hope so.

However, executive producer Roberto Aguirre-Sacasa did compare the Riverdale Season 2 premiere to an episode of another series that might worry some fans a bit. "We will reveal [Fred’s] fate at the end of episode one," he told Entertainment Weekly. "Episode 1 is almost a special episode. It’s a little bit like the Buffy the Vampire Episode episode "The Body." It’s structurally a little bit different."

If you aren’t familiar with that particular Buffy episode, it’s a somber one in which Buffy finds her mother’s dead body in their home and must cope with the loss while taking the lead in informing everyone in her life of the tragedy. If the season premiere of Riverdale is likened to that particular episode, does that mean Archie’s dad dies by the end of the episode? Hopefully, Aguirre-Sacasa just meant that in terms of style and mood, that’s what the episode shoots for, because I don’t know if I can handle a grieving Archie all season long.

K.J. Apa (Archie) revealed to Teen Vogue that, whatever Fred’s fate may be, the shooting itself is a jumping off point for a new kind of not-so-fresh-faced Archie that viewers haven’t seen before. "After Fred [is] shot, a switch is flipped in [Archie's] brain where he's kind of blinded by the revenge he has for whoever shot his dad," Apa told the outlet. He also added that Archie’s need for revenge on whoever shot his dad "takes over everything and kind of gets in between his relationships with all his friends, and with Veronica, his girlfriend."

Obviously that doesn’t give much in the way of who shot Archie’s dad or if Fred even survives the bullet wounds, but there’s definitely a chance that Fred lives and Archie is still intent on exacting revenge for his dad. It might also be how Veronica’s dad makes his entrance, as it’s entirely possible that he had someone follow Fred to Pop’s Diner to shoot him for shacking up with his wife while he was in prison.

With the introduction of new characters for Riverdale Season 2, there will be no shortage of suspects for who shot Archie’s dad, but first he needs to survive and luckily, that answer will come by the end of the season premiere.