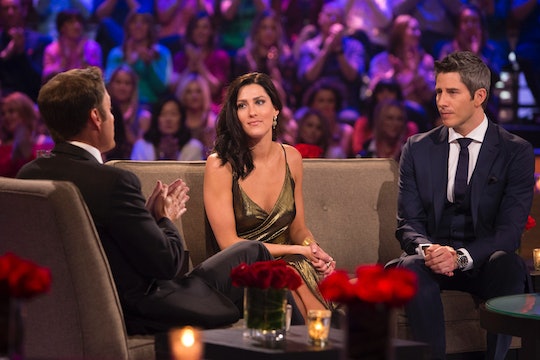 So far, this season of The Bachelorette has been very Arie heavy. One guy showed up with a cutout of the former Bachelor, then Becca went on a one-on-one and smashed all of his "things." You can't get through five minutes of the cocktail party without hearing his name. Knowing how Chris Harrison and his producers work, it's worth wondering if Arie is on Becca's season of The Bachelorette. Leave it to this guy to keep taking Becca's spotlight, right?

Well, in an interview with Us Weekly this week, Becca said that an appearance by her ex-fiancé just "had to happen." She added, "He makes a quick appearance. I’m not going to give anything away or when it happens, but it’s a conversation that had to happen.” Becca also added that she finally feels like they got it all out when he came by the set.

There's no confirmation about exactly when this happens, but just know that we might actually get to hear him say "I love that" one more time. Or maybe the other guys get to put him in some water tank and dunk him. Or Arie gives them some advice about wooing her. The possibilities are absolutely endless.

But don't expect to see any of her other exes on the show this season. Remember during Arie's season, Becca's ex Ross Jirgl showed up and tried to win her back, right before the very end of the show. Well, he won't be coming through this time, despite the fact that some fans are betting on it. In the same Us Weekly interview with Becca, she added:

Well, I would tell everyone to be careful what they wish for, because I think that they would be eating their words later on. But yeah, I don’t want to feed any life into that relationship and I don’t think anyone would want to see that either.

Eventually they have to let Becca move on with her life, right? Thankfully, it sounds like she does. According to various interviews she's done, Becca does end up getting engaged by the end of the season. She told Entertainment Tonight, "I did develop really strong feelings for a couple of them and I did fall for two guys at the end." At the very end, she actually empathized a little more with Arie, who dumped her and then got engaged to his runner up. According to Entertainment Tonight, Becca said:

Until you're in this position, you don't realize how much pressure there really is, and how difficult it is to navigate certain relationships. Because if you're doing it right, you should be developing feelings for multiple people to really sift through every personality, every relationship, to exhaust the ones that aren't right for you.

It would be so very Bachelor Nation to have Arie come in at that point and counsel his ex in how to figure out who to really choose the person that she wants to spend the rest of her life with. (Or at least the foreseeable future.) But enough with Arie already, right? While it's true that his switch-a-roo at the end of last season's The Bachelor is the stuff of legends, he didn't exactly exhibit a lot of good judgement afterwards.

According to The Washington Post, many fans noted that he lingered for an uncomfortably long time after she had asked him to leave and wondered on social media why he felt the need to to film the breakup on television, instead of doing it off camera like other bachelors before him. The fact this season is relying so heavily on Arie instead of some of the suitors on The Bachelorette this season is definitely not what people might have expected.

Maybe they'll have a conversation earlier on in the season so that Becca can enjoy all these other dudes vying for her heart. As much as people want Arie to be happy with Lauren, they probably also want him to just leave Becca alone already.