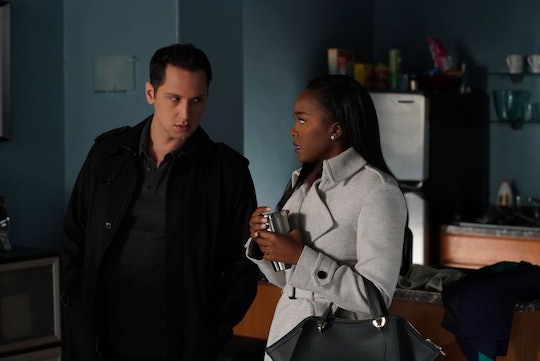 How To Get Away With Murder is known for setting up a grisly crime at the opening of every season, and then time-jumping to gradually reveal all the puzzle pieces. In Season 4, we're working our way toward figuring out what happened to Laurel's baby, who seems to be mysteriously missing. Michaela is also shown screaming, "Is he dead?" as she runs through the hospital, and while many may assume she's referring to Laurel's baby boy, that's not the only male character she cares about. So is Asher dead on How To Get Away With Murder?

Based on the flash forwards fans have seen so far, there are two bloody crime scenes awaiting us: one in the elevator of Annalise Keating's temporary residence and one at the prestigious litigation firm Caplan & Gold, where Michaela has snagged herself an internship under the guidance of Tegan Price. At the second crime scene, we see Oliver looking super guilty and Bonnie looking sympathetic, but that's about all the information we have. Meanwhile, Laurel is in a hospital bed in what seems like it could be some sort of psychiatric institution. Frank is with her. Annalise's therapist Isaac is standing outside the hospital nursery, which is where Michaela burst in and was shown falling into his arms as she desperately demands to know if "he" is dead. But that's it — no Annalise, Asher, or anyone else in sight.

The biggest hint we have that Asher might be dead is in how utterly devastated Michaela seems. She ends up screaming, sobbing hysterically, and collapses onto Isaac when she sees him. Sure, your best friend's baby dying unexpectedly (if that is indeed what happened) would be very, very devastating. But Michaela's breakdown seems like it comes from a deeply vested place. She doesn't break down in front of Laurel; she breaks down in a hallway with Isaac in front of the nursery. The intensity of her reaction doesn't seem like it comes from grief over a baby who died in childbirth. It feels like grief over a fully formed human whom she actually knows, loves, and is deeply invested in. It other words, it seems like a "my boyfriend is dead" breakdown more than a "my best friend's baby died" breakdown.

One possibility which might explain that withering look she gives the nursery babies is that the gang became involved in some sort of covert rescue mission to conceal Laurel's baby from her father, and that — in the execution of that mission — someone (like Asher), got hurt in the process.

Annalise's notable absence from these bloody flash forward sequences and Laurel's confusion over where her baby went has fans speculating that Annalise took the baby. Although we have no idea why she would do that, one plausible explanation is to protect him from Laurel's father, who murdered Wes, and would thus have cause to murder his baby. So perhaps Annalise made off with Laurel's baby to get him safely into hiding. The way Frank tries to calm Laurel without answering any of her questions makes it seem like he's in on it, which might mean that the whole gang conspired to make this possible.

If Laurel's dad caught onto this plot, there's presumably a chase in progress for the baby. It's possible someone got hurt on their leg of the mission (ahem, Asher), falling victim to one of Castillo's cronies. This theory admittedly assumes a lot, but we don't have many of our puzzle pieces yet at this point in the season and virtually anything is possible in Shondaland, so I certainly wouldn't rule the possibility out either — not until we see Asher in the flash forward safe and sound.