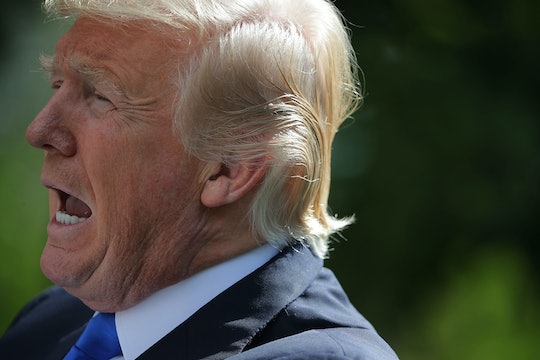 On Wednesday, President Donald Trump took to Twitter to announce his administration's next project, but it has left many experts wondering: Is banning transgender people from the military discrimination? When men and women were finally allowed to serve in the military as openly transgender under the Obama administration, it was certainly hailed as a step forward away from discrimination, but Trump's ban on transgender people serving at all could pave the way for legal headaches for years to come.

Trump tweeted that he had been in consultation with his generals and unnamed "experts," and that there would now be a blanket ban on any transgender person from serving in the U.S. military, openly or otherwise. This goes well beyond a reversal of policy and steers right into open discrimination that may not be protected under federal law.

According to the ACLU, while the Supreme Court has not directly taken up the issue, the civil rights organization believes that transgender people are protected from discrimination under the U.S. Constitution. Trump's ban on transgender people serving in the military certainly paves the way for the Supreme Court to finally weigh in on the constitutionality of discriminating against this group of people.

According to the National Center for Transgender Equality, it estimates that there are as many as 134,000 transgender veterans and approximately 15,000 trans people currently serving in the U.S. military. Trump's ban on trans military personnel immediately calls into question what happens to the livelihoods and military careers of as many as 15,000 trans people — will they be kicked out of the military effective immediately? What about these people's pensions, housing, and health benefits?

As with the character limits of Twitter, Trump didn't expand into the details of what this new ban means in the immediate term — because let's face it: He probably hasn't thought about it. His seemingly snap decision rings of the knee-jerk "shoot first, ask questions later" approach he took to his Muslim ban, but without the pomp and circumstance of signing an executive order from the Oval Office desk.

Even more shameful about this ban on trans people in the military is the timing of it. Wednesday marks the anniversary of when President Truman desegregated the military, ending racial discrimination against blacks in 1948. The juxtaposition of Truman's executive order ending military segregation with Trump's ban — made via a tweet, of all things — isn't just bad optics: It's insulting to anyone in the military.

Trump's ban and its immediate effects leave more questions that answers at the moment, but the question of discrimination is a no-brainer: Of course it's discrimination to ban trans people from serving in the military. Now it's up to the courts to determine if that answer has actual legal merit.

More Like This
Prince Harry Shares His Advice For Children Grieving The Loss Of A Parent
Meghan Markle Spent Her Thanksgiving Volunteering For A Cause Close To Her Heart
Exclusive: 'Firebuds' Dives Into Hanukkah Traditions In Festive New Episode
Over 10,000 Sippy Cups & Bottles For Toddlers Recalled Due To Lead Poisoning Hazard