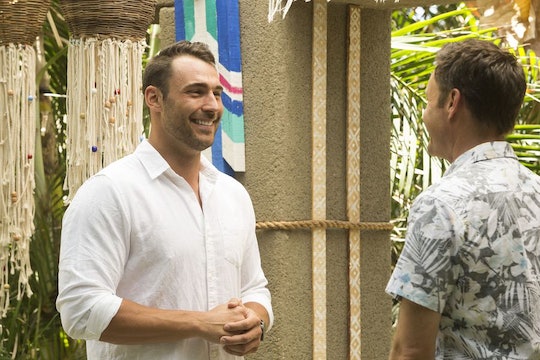 Ben Z. Has Found Love Outside Of 'Paradise' — Sorta

For those who aren’t familiar with Ben Z., he’s almost like a throwback Bachelor Nation star, since he last appeared on The Bachelorette Season 11. But after spending a few years working on his personal training program and being generally inspiring, he decided to accept the invitation to compete for roses on Bachelor in Paradise. Unfortunately, he hasn’t found much luck so far this season, and since it’s coming to an end, is Ben Z. single after Bachelor in Paradise? There might not be a lucky lady on his arm, but there is still someone very important in Ben Z.’s life.

Of course I’m talking about his prized rottweiler Zeus, who is all over Ben Z,’s Instagram like a cherished child. I’d expect nothing less from the guy who’s continually let it be known that instead of finding love in paradise, he could be home taking care of his dog. But honestly, who can blame him? Just because Ben Z. is all about that fur baby life though, that doesn’t mean he doesn’t have a lot to offer some of the women on Bachelor in Paradise. However, after a while, it’s probably difficult to see past his frequent mentions of his dog back home. Don't get me wrong, I love dogs just as much as anyone, but he does bring his pet up a lot.

According to Ben Z.’s Instagram, and the one he made for his dog, it looks like they’ve been together since Zeus was a small puppy in January and apparently, they’re inseparable. Except, you know, when Ben Z. decided to try and find Zeus a mom on Bachelor in Paradise.

Maybe if Ben Z. had appeared on the show earlier, he would have found someone he was more compatible with. In 2016, Us Weekly reported that Ben Z. actually turned down the offer of appearing on Season 2 of Bachelor in Paradise, so you can’t help but wonder if he would have made a connection with someone like Carly Waddell (this was well before she fell for Evan Bass) before Kirk DeWindt broke her heart on Season 2.

Ben Z. definitely seems like a genuine guy who has a lot to offer the women of Bachelor in Paradise, but once some of the connections were formed, there was no getting around them in order to pursue some of the women Ben Z. might have had his eye on. From the looks of Ben Z.’s Instagram though, the fitness expert and trainer is happy enough spending half of his time with Zeus and the other half at the gym. And who can be mad at that?