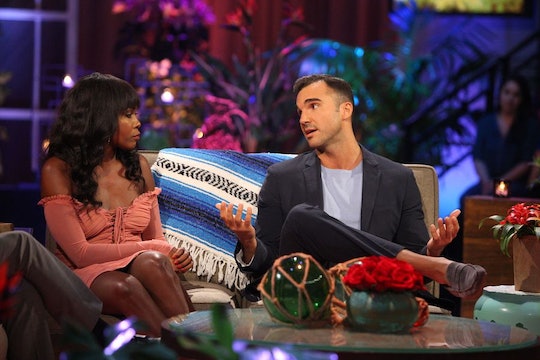 Jasmine & Christen Have History Prior To 'Paradise'

With some of the memorable men and women from The Bachelor and Bachelorette, who can blame them for showing up in Paradise looking to make a connection with a certain man or woman they may have seen in passing? But when couples are split apart because one half wants to see what else is out there, things get dicey. Based on promos, newcomer Christen is about to show an interest in Matt. So what does Jasmine Goode think of Christen on Bachelor in Paradise?

Apparently, the women were friends before the filming of Bachelor in Paradise Season 4 began. They may not have been at BFF status, but Christen’s interest in Matt in the promos for Monday’s episode show that she may be inadvertently driving a wedge between Jasmine and Matt, who seemed like a solid, fun-loving couple from the start. In an interview with The Ellen Show producers Tracy Gold and Andy Zenor on Ellen’s YouTube Bachelor in Paradise recap, Jasmine touched on the upcoming drama and love triangle between herself, Christen, and Matt.

"There’s some history with me and Christen," she revealed. "I was just a little hurt about some things." When asked is she told Christen during the short break of filming that she already had something with Matt, Jasmine all but confirmed it. So since Christen did go into the show knowing full well that Jasmine had been building something with him, it makes her interest in him that much more difficult for Jasmine to cope with. And really, who can blame her?

Like Jasmine, Christen was a contestant on Nick Viall’s season of The Bachelor and like many Bachelor Nation friendships, theirs started while competing for the love of the same man. But since neither made it out of the show with an engagement ring, it was probably easy to strike up a friendship once the competition was over and they were just two single women.

Unfortunately, the competition is about to rise between them once more when Christen shows an interest in making a connection with Matt, who Jasmine has been into since they set foot in Paradise.

Since they experienced The Bachelor together and are now on Bachelor in Paradise, on paper Jasmine and Christen should still be close. But it takes just one male contestant and the prospect of love to drive friends apart on Bachelor in Paradise. And judging from the clip, which shows a saddened and then angered Jasmine realize that Matt’s going to go on a date despite their budding relationship, it’s clear she’s not someone to mess with.